'Catastrophic and ridiculous': Journalist explains how Trump got the whole world 'laughing' at him 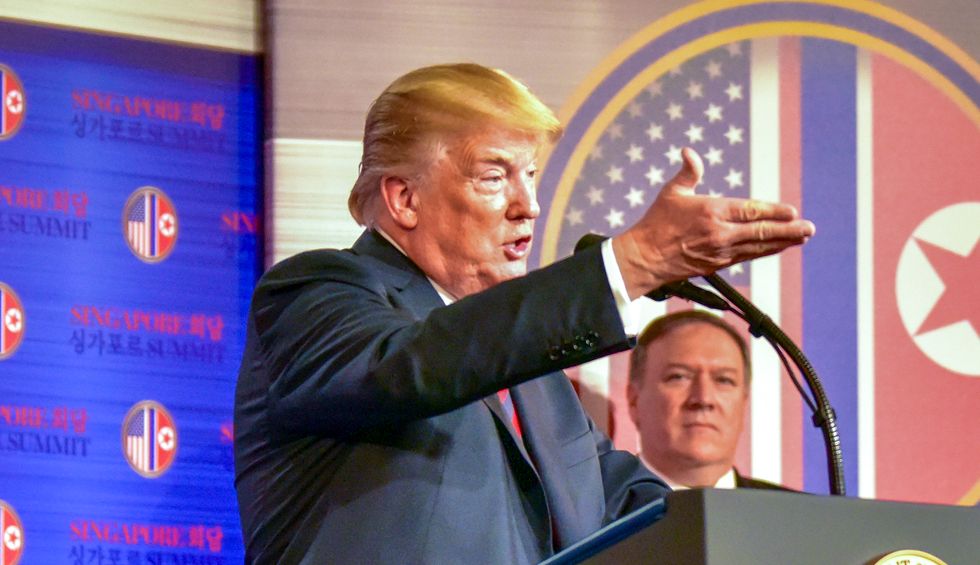 On April 30, the Chinese news agency Xinhua released a video mocking President Donald Trump’s response to the coronavirus pandemic. Journalist Anne Applebaum, in The Atlantic, describes the video as “crude propaganda” and “shameless propaganda.” But she also acknowledges that there is some truth to it, lamenting that China is hardly the only country where Trump’s response to the pandemic has been the subject of mockery and ridicule.

Propaganda, Applebaum explains, “works best in a vacuum, when there are no competing messages, or when the available alternative messengers inspire no trust. Since mid-March, China has been sending messages out into precisely this kind of vacuum: a world that has been profoundly changed not just by the virus, but by the American president’s simultaneously catastrophic and ridiculous failure to cope with it.”

Applebaum goes on to note that countries where Trump’s coronavirus response has been the subject of vehement criticism or mockery range from France to Indonesia to South Africa to Peru. France’s Le Monde, for example, published an article with the headline “The Rantings of ‘Doctor’ Trump” (“Les Élucubrations du ‘Docteur’ Trump”) — and Peru’s El Comercio noted how embarrassing it was for Dr. Deborah Birx when Trump, at an April 23 White House press briefing, suggested that perhaps household disinfectants could be injected to treat coronavirus.

“Quotations from the president’s astonishing April 23 press conference have appeared on every continent, via countless television channels, radio stations, magazines and websites, in hundreds of thousands of variations and dozens of languages — often accompanied by warnings, in case someone was fooled, not to drink disinfectant or bleach,” Applebaum writes. “In years past, many of these outlets presumably published articles critical of this or that aspect of U.S. foreign policy, blaming one U.S. president or another. But the kind of coverage we see now is something new. This time, people are not attacking the president of the United States — they are laughing at him.”

Italian columnist Beppe Severgnini, Applebaum observes, recently said of Trump, “In this time of darkness and depression, he keeps us entertained.”

Politically, there are enormous differences between the authoritarian government in China and European liberal democracies like Italy and France — both of which are long-time allies of the United States. But Applebaum, in her article, warns that countries that would like to be looking to the U.S. for guidance during a time of crisis view Trump as a joke and loyalists like Secretary of State Mike Pompeo as his “lackeys.” And one of the bad things about having a U.S. president who is asleep at the wheel, according to Applebaum, is that “a vacuum has opened up, and the Chinese regime is leading the race to fill it.”

“When Trump seeks to lead the world against China, who will follow?,” Applebaum stresses. “Italy might refuse outright. The European Union could demur. America’s close friends in Asia might feel nervous and delay making decisions. Africans who are furious about racism in China — African students have been the focus of heavy discrimination in the city of Guangzhou — might well do a quick calculation and seek good relations with both sides.”

Applebaum concludes her article on a depressing note, warning that if Trump is reelected in November and defeats former Vice President Joe Biden — the presumptive Democratic presidential nominee — the days of other countries taking the U.S. seriously will be a thing of the past.

“Any nation can make a mistake once, elect a bad leader once,” Applebaum asserts. “But if Americans choose Trump again, that will send a clear message: we are no longer a serious nation. We are as ignorant as our thoughtless, narcissistic, ignorant president. Don’t be surprised if the rest of the world takes note of that too.”