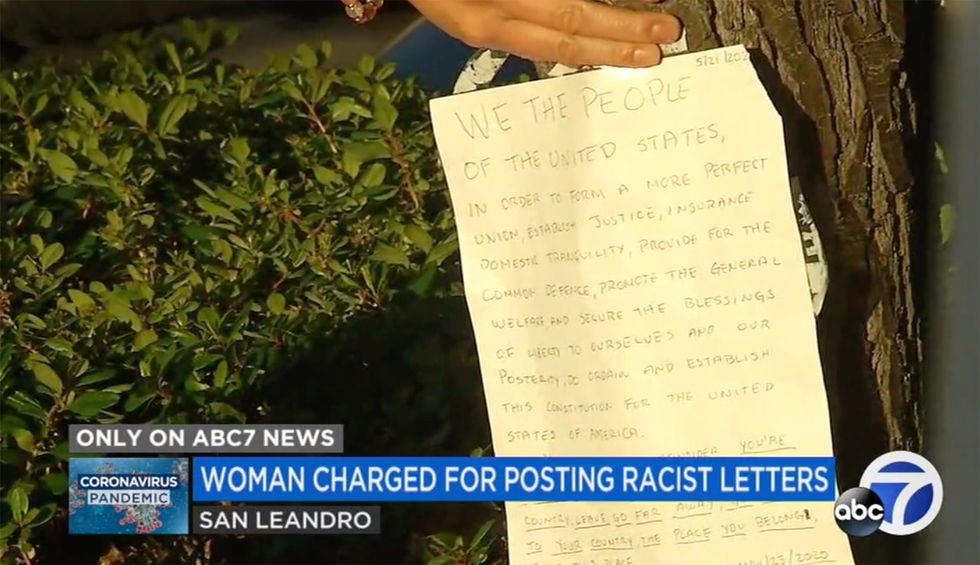 Image via Screengrab.
Aysha Qamar
and
Daily Kos
May 27, 2020

Reports of xenophobia against Asian Americans continue to rise amid the novel coronavirus. Asian Americans are not only being threatened by physical and verbal violence in public spaces but being targeted in the comfort of their homes. A woman was captured on home security footage in California last week posting racist handwritten notes that threatened minorities, asking them to leave the country. The woman identified as 52-year-old Nancy Arechiga was arrested Friday for allegedly posting “insensitive messages towards minorities” on at least five doors in a San Leandro neighborhood, police said. Similar notes were also found in public spaces in the area.

“If you are a woman or man and was born in other country, return, go back to your land immediately, fast, with urgency,” the note read. It even threatened receivers that they must “leave this country” by May 23 at 10:30 AM and referred to them as strangers. The note ended with the line, “One American, white, brave, that serves the Nation or USA is going to live here.” Police officers identified the woman using images captured on a man’s doorbell security camera.

She was found in the area with a backpack containing copies of the same note, police said in a statement, according to the Associated Press. While Arechiga was arrested in suspicion of committing a hate crime, she was released from custody with no bail due to new policies on misdemeanors and low-level crimes. These policies are a result of California’s efforts in keeping jails empty during the novel coronavirus pandemic. A date has not been set but Arechiga was told to appear in court, following an investigation into the incidents.

Police are also investigating a possible connection to another note found Thursday reading, “no Asians allowed, leave immediately, ” the AP reported. "San Leandro is a community of beautifully diverse people, who share a common desire to live in harmony, and free from intimidation," San Leandro police Lt. Isaac Benabou said in a statement. “We welcome people’s rights to express themselves, but not in a manner that infringes upon a community’s sense of security and well-being.”

ABC News spoke to one of the individuals who read the note found by her family. "It was shocking and the whole family was really shaken up at it. I can't comprehend hatefulness reading this letter send chills down my spine," a woman going by Trinh told the news outlet. "Obviously there's been a spike in attacks the Asian American community due to this pandemic," Trinh said. "It's sad to see that. At the end of the day we just have to really be strong and resilient and speak up when we see something."

But despite the note’s racist and xenophobic message, Trinh shared her family’s and the community’s resilience in a message she had for Arechiga, she told ABC News. "We are a strong family and we will move forward. We're very forgiving so we just hope that for this woman whatever she's going through she'll find peace at the end of the day."

The incident follows hundreds of attacks on Asian Americans since the start of the pandemic. Daily Kos noted that an online anti-Asian bias tracker received almost 1,500 reported cases of violence as a result of COVID-19 toward Asian Americans within a month of its launch in March. A report by the Federal Bureau of Investigation (FBI) warned individuals of an increase in hate crimes against Asian Americans as people made unwarranted ties to Asian American communities and the spread of COVID-19, ABC News reported. Americans must do better to protect the minority communities from which this country benefits. America is built on the bricks of diversity and must break the cycle of violence it perpetuates on people of color.