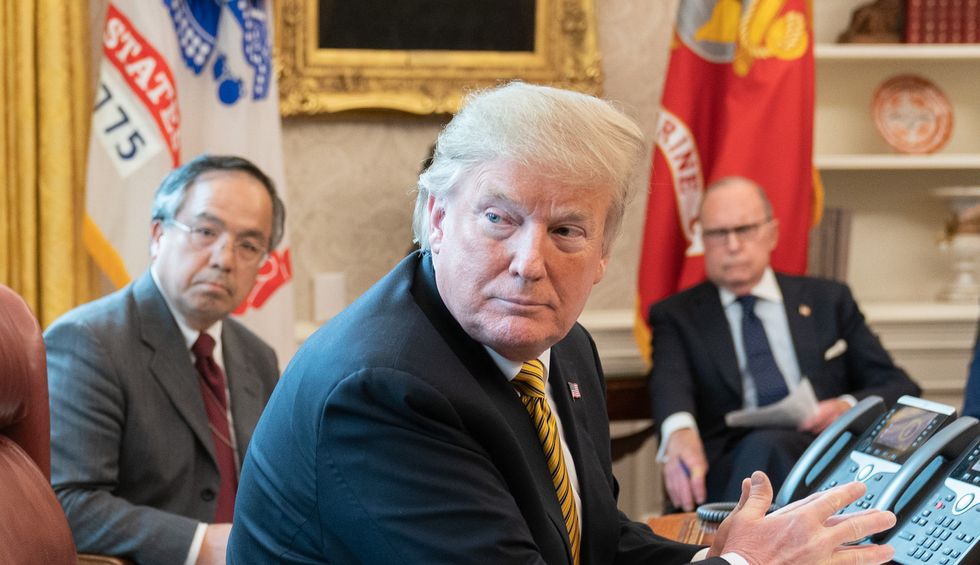 President Donald Trump is being accused of engaging in voter suppression against key swing states and repeating the same type of threats that got him impeached.

Trump kicked off Tuesday with a tantrum of a half-dozen tweets about the fake unmasking “scandal,” the fake “Obamagate” “scandal,” a false claim “nothing else” except China is responsible for the coronavirus pandemic, a false suggestion Roger Stone is innocent, a false suggestion Joe Scarborough committed murder, and two attacks on states gearing up for voting by mail.

The President is terrified of voting by mail, because it will make it easier and safer for Americans to vote. The more people vote, the fewer Republicans get elected, and he knows that.

In fact, he’s said that.

“I will tell you this. If you look at before and after, the things they had in there were crazy,” Trump said in March about Democratic proposals to the $2.2 trillion coronavirus support bill. “They had things, um, levels of voting that if you ever agreed to it you’d never have a Republican elected in this country again.”

Today, attacking key swing states Michigan and Nevada, Trump falsely claimed voting by mail creates “Voter Fraud,” which is false, and that even sending out applications to vote by mail is “illegal” – even though he himself votes by mail.

On social media many immediately accused him of engaging in voter suppression.

Legal and voting rights experts (and a few journalists) were quick to debunk the President’s latest lies:

And, Trump is wrong on the specifics. Michigan is mailing applications for absentee ballots, not ballots themselves… https://t.co/zkNVx4xQkw
— Joyce Alene (@Joyce Alene)1589978044.0

Leaving aside his characteristically imbecilic misuse of quotation marks, it is manifestly clear that Trump and his… https://t.co/M0eVraG5dR
— Clyde Haberman (@Clyde Haberman)1589982589.0

Even though he himself voted by mail in Florida’s March primary, Trump is making a Ukraine-style threat to withhold… https://t.co/49CX90ZdoR
— Chris Sommerfeldt (@Chris Sommerfeldt)1589979684.0

This is false. Michigan is mailing absentee ballot applications, not ballots, to all registered voters. Georgia is… https://t.co/MTPZcwo3LX
— Sam Levine (@Sam Levine)1589977223.0