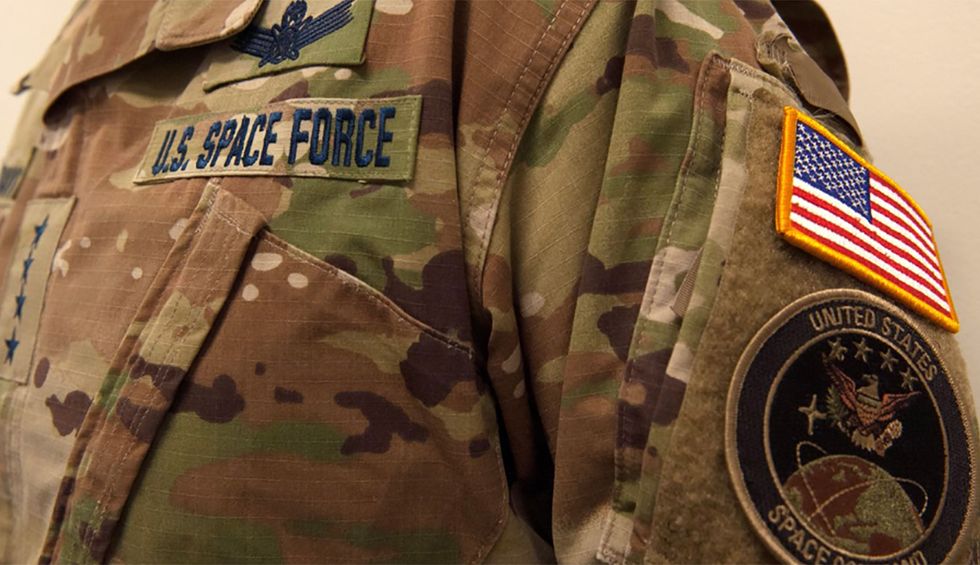 Image via Space Force / Twitter.
Jim Hightower
and
Creators.com
May 13, 2020

Bring on Captain Kirk, Spock and the whole intrepid "Star Trek" cast. And while you're at it, toss in some "Dr. Strangelove," for President Donald Trump is on a mission to turn science fiction into official military policy. Or is it the reverse? Either way, he's casting himself as a cosmic warrior with a heroic vision to turn the spectacular majesty of space into, as he put it, "the world's new war-fighting domain." How fantastic is that?

The 73-year-old, who cravenly got his rich daddy to help him dodge actual war during the Vietnam era, is now demanding that the Pentagon, Congress and we taxpayers set up yet another military bureaucracy for sending future youngsters to war. In typical Trumpian fashion, he apparently got this idea from TV and then refined it by consulting his top policy expert: his ego. "You know, I was saying it the other day," he bloviated in March 2018 to a few hundred Marines that the brass had provided as an audience, "I said, 'Maybe we need a new force. We'll call it the Space Force.' And I was not really serious. And then I said, 'What a great idea.'"

The Marines laughed, but the notion of being space warrior in chief gelled in Trump's languid mind. By June, he declared: "When it comes to defending America, it is not enough to merely have an American presence in space. We must have American dominance in space." Then he puffed himself up like a tin-pot potentate and bellowed, "I'm hereby directing the Department of Defense and Pentagon to immediately begin the process necessary to establish a Space Force as the sixth branch of the armed forces."

And away we go. This is really happening. In Trumplandia, though, appearance matters more than substance. So first things first: To date, America's snappy new extraterrestrial warfaring department boasts two achievements:

1. The Logo. "After consultation with our Great Military Leaders," the president said, he tweet-revealed the new logo of the "Magnificent Military." Good that our generals are focusing on such core tasks, but the emblem turns out to be ... well, a weak knockoff of the fictional Starfleet Command badge. "Ahem," actual "Star Trek" actor George Takei joked, "We are expecting some royalties." Less funny is that Trump's reelection campaign used the official Space Force insignia as a fundraising gimmick. In 2018, his political partisans got an email with possible insignia designs to vote for their favorite. When they clicked on their choice, they were delivered to a page asking for campaign donations.

2. The Uniform. Even before it has any official duties or structure, Trump's fledgling Space Force grandly paraded its celestial colors for all the universe to behold. But, bizarrely, the ensemble was in the old Army camouflage pattern of splattered brown and green -- sensible for a jungle war ... but for patrolling the infinity of space?

If all this seems like silliness from a satirical sitcom, it is. Recognizing an artistic and commercial goldmine, Netflix has already wrapped up the first season of "Space Force," a 10-episode sitcom about the scramble to construct a far-out military branch. "The goal of the new branch," the TV promo intones as the theme music from "2001: A Space Odyssey" swells, is to "defend satellites from attack and perform other space-related tasks ... or something."

We do need to be vigilant about the very real economic and security issues that exist in the envelope beyond our blue marble's atmosphere. For one thing, near space is chock-full of satellites that our modern world relies on, not just for GPS directions to a new restaurant but for info on storms, data from bank accounts and health records, access to Wi-Fi networks and even the simple ability to call home. Moreover, satellites can keep watch for military attacks including those hurled at the 1,000-plus U.S. orbiters. After all, we're hardly the only national power beyond the stratosphere: Nineteen countries including China, Russia, India and Israel have the technical wherewithal to not only launch satellites but also disrupt, disable and destroy them.

Obviously, we need to pay attention. But, here's the thing: We already do. Trump grandiosely gloats at public rallies and private fundraising events that he invented the Space Force (if not space itself!), but in fact, the Air Force Space Command has existed since 1982. Indeed, the Pentagon presently spends a whopping $14 billion a year on space operations. In short, there's no need for this thing ... except for Trump's political needs.

To find out more about Jim Hightower, and read features by other Creators Syndicate writers and cartoonists, visit the Creators webpage at www.creators.com.