A prison abolitionist runs for office in deep-red Indiana 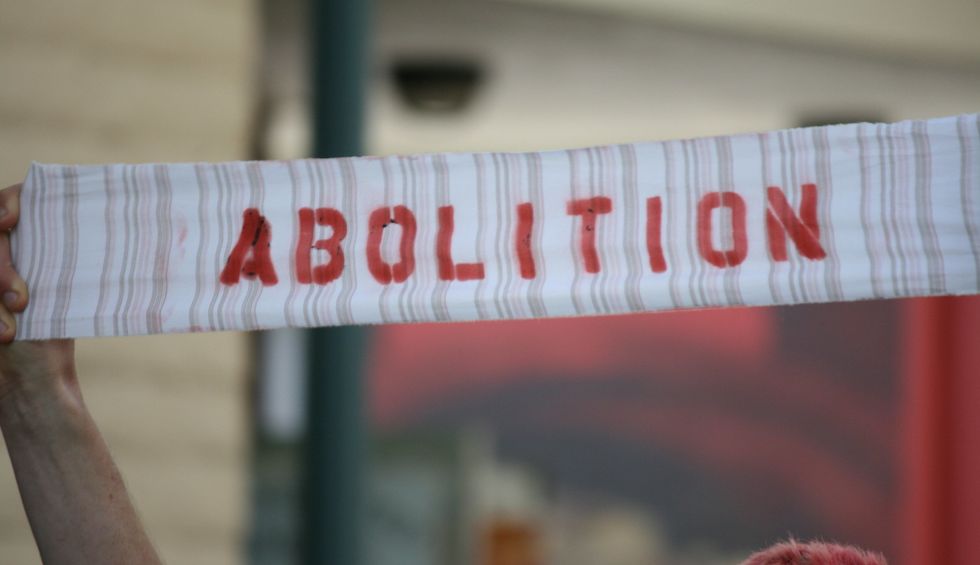 Photo of a protest in Santa Cruz by Richard Masoner/Cycleicious via Flickr/Creative Commons 2.0.
Rory Fleming
and
Filter
May 05, 2020

Fort Wayne, a gateway to the American West that started out as a significant trade port along the Erie Canal, has a distinctive character, with a manufacturing-based economy and proud working-class culture. In 2012, when a writer at Deadspin joked about not wanting to visit, he was inundated with polite hate mail and wounded invitations. Five hours later, that writer came up with Seven Great Things About Fort Wayne, Indiana. A current council race pitting a long-shot prison abolitionist against a reactionary sheriff could just be an eighth.

Erin Fogg is running for an at-large seat on the Allen County Council, and explains that she is “running against the former sheriff in a red Northeast Indiana county on an abolitionist criminal justice reform platform.” She sports the red rose emoji that signals kinship with the Democratic Socialists of America, a left-wing political organization that fights for amplified labor power, Medicare for All and a Green New Deal. Two other progressive candidates, Stephanie Henry and Marsha McCrosky, are hoping to help her flip the council for the Democrats for the first time since the 1960s.

If elected alongside her two colleagues, Fogg would be able to implement her values through her budget, an underestimated tool for those who want to reduce America’s incarceration rate. Even if Fogg is the only one who wins of the three, she told Filter that she will block all funding for jail expansions or new construction, adding that “We need to stop building jails just because some people want to be cops.”

Fogg, a white mom of two young daughters, espouses the prison abolition ideology that took root from within prisons and from thinkers like Angela Davis who, as Black women in a racist, heavily incarcerated society, worked to imagine a more liberated world. Prison abolitionists do not believe that serious harms against others should be ignored, but instead that society can be compassionate enough to create humane, community-based alternatives for accountability.

With the money that would be saved on policing—altogether, law enforcement is over 70 percent of Allen County’s $111,938,140 budget—Fogg argues that a chunk of these resources can go into vital countywide services that reduce crime.

On the other hand, there’s former County Sheriff Ken Fries, a local celebrity. After switching jobs, Fries and his two sons went on a bike trip to Michigan; somehow, this qualified as newsworthy. Fries has worked as a county law man nearly his entire adult life, which has shaped his views.

“When you start dumping felons out on the street, maybe that’s not the best thing for the public. So, we built jails for a reason,” Fries quipped right before COVID-19 hit. He was lamenting a new Indiana law that let people convicted of low-level, nonviolent felonies serve their time in county jails instead of state prisons. (Meanwhile, victims’ rights groups tried to pressure Allen County Prosecutor Karen Richards out of office for not doing enough to prevent and prosecute murders.)

Statewide, Fries is definitely not alone in his views. Aaron Negangard, then Dearborn County’s elected prosecutor, was featured by The New York Times as the face of mass incarceration. “I am proud of the fact that we send more people to jail than other counties,” Negangard told the reporter in 2016. “That’s how we keep it safe here.” Negangard boasts about the experience on the website of Indiana Attorney General’s office, where he serves as chief deputy.

But Fogg is undeterred. She has already spent years challenging Indiana’s elected officials—like when she demanded that then-Governor Mike Pence justify the state’s high incarceration rate when crime rates were at record lows. She is now focusing on how COVID-19 transformed many popular “leftist” ideas into ones that are extremely palpable. “Policies like Medicare-for-All and decriminalizing marijuana are popular, populist positions,” she told Filter, “but they also would flat-out save lives.”

Fogg undoubtedly faces an uphill climb, but influential allies could start to emerge from the woodwork. For example, Allen County’s 2020 budget shows that all the county’s assistant public defenders are making under $50,000, while many of the assistant prosecutors are approaching six figures.

“The long and short is, if I’m going to lose in a deep-Red district, I’m going to lose standing up for what’s right,” Fogg said. “If I win, it’ll be because more voters than not are moved by the exact bold convictions that the local establishment Democrats would rather I water down.”