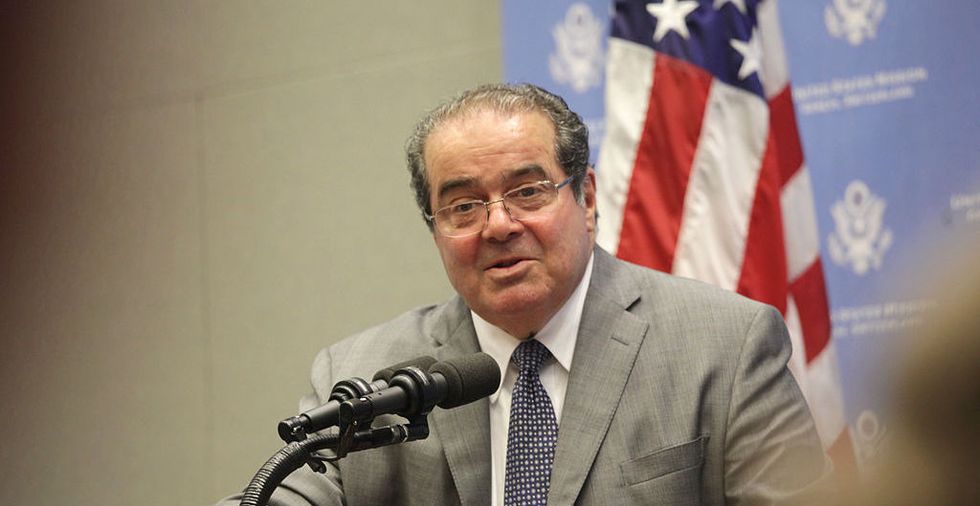 Marcus Andrew Burrage was once a small-town guy from rural Iowa who sold another man heroin. As is typical of the courts and media coverage, no one really considered the broader spectrum of Burrage’s life. But his name will live on like few others: Burrage’s “drug-induced homicide” conviction, and the ensuing 20-year mandatory prison sentence, was reversed by the United States Supreme Court in Burrage v. United States.

That 2014 decision was penned by the deceased conservative giant, Justice Antonin Scalia. Scalia pointed out that in adopting the Anti-Drug Abuse Act of 1986’s drug-induced homicide provision, Congress used the phrase “results in [death]” without defining the crime further, which meant that the lay understanding of those words is the law. There was little fanfare or outrage after the high court’s unanimous reversal, which organizations including Families Against Mandatory Minimums and the National Association of Criminal Defense Lawyers urged in third-party amicus briefs.

Then the “opioid epidemic” ramped up further. Local prosecutors with dramatically smaller budgets than the US Department of Justice started charging people selling or sharing drugs with “drug-induced homicide” when clients, family members, or friends tragically and accidentally died. Federal prosecutors like Trump’s Massachusetts US Attorney Andrew Lelling threatened doctors regardless of the soundness of their medical practice. Pain patients suffered with dramatically reduced relief, with little abatement of the deaths that everyone is trying to prevent. The progress made in keeping people who use drugs safe has been on the harm reduction front, which has gone mainstream enough for police to carry naloxonea to save people from overdose deaths.

Yet criminal justice politics cares notoriously little for facts, and so the grueling, overzealous prosecutions continue. As one 2020 federal prosecution in West Virginia shows, federal prosecutors continue to try their luck against the Burrage decision; they have to be reminded by defense lawyers that it was handed down in the first place.

Some have clamored for the reversal of Burrage, most expectedly the prosecutors themselves. At oral argument in Burrage, the government’s attorney said that the Supreme Court should “borrow courts’ approaches to causation in common law cases,” which that lawyer characterized as being “if your test for causation, say a but-for test, is producing a result in a case that nothing and nobody was the cause of the victim’s death, you need to rethink your test for causation [because i]t’s not producing sound results.”

In other words: If people are not being punished for things they did not do, let’s find a way to fix it.

In 2018, Alyssa M. McClure, then a law student at University of Notre Dame—which Princeton Review found attracts some of the country’s most conservative law students—penned Illegitimate Overprescription: How Burrage v. United States Is Hindering Punishment of Physicians and Bolstering the Opioid Epidemic. The article predominantly argues that doctors should not just be punished for overdoses regardless of intent, but buried under the jail. It provides some good insight as to what two-time interns at DOJ learned about opioids from the experience.

As McClure explained, Burrage did not ban the drug-induced homicide statute. Instead, it meant that prosecutors could no longer simply state that, in the situation of a polysubstance overdose, the drug a particular person gave to another was one of many causes and thereby “win” the case. Until 2014, that extremely loose standard was sufficient. Post-Burrage, a Len Bias conviction could only stand in federal court when that particular drug’s use is a “but-for,” or proximate cause, of the death or serious bodily injury. That meant that, in a miniscule number of cases, a physician with an illegal pattern of overprescribing received a reduced sentence after the fact.

McClure, for one, thinks this is outrageous, chafing at the idea of someone like Dr. Dewey McKay being sentenced in 2011 to “only” three years in federal prison, instead of 20. McKay was already in his sixties when sentenced, meaning McClure wanted him to die behind bars without his loved ones.

The American Journal of Law and Medicine characterized Dr. McKay’s conduct as negligent or reckless overprescribing patterns, and he was deemed to have caused one patient’s death by accident. Yet, if he actually went out and threw an ax between a neighbor’s eyes in Utah where he lived, he could have faced a shorter sentence—15 to life—than the 20 to life he faced under the federal “drug-induced homicide” law. (While the death penalty legally exists for murder in Utah, it is virtually never used.)

In order to cure the law of its perceived impurities, McClure pointed out three reasons Burrage should be meddled with.

First, she argued that there is a “fear that no one is being held responsible for patient deaths,” again pointing to doctors receiving shorter sentences in similar cases after the decision. The most compelling example she gives is the shocking, anomalous case of Dr. Stephen Schneider and his wife, Linda, co-defendants in a case where over 100 patients ended up in hospitals due to overdoses. McClure claimed that a jury found that four people died due to their conduct, even with the new standard. While they were not convicted under the “drug-induced homicide” provision, both defendants still received over 30 years’ incarceration, again more or less guaranteeing the death of both middle-aged defendants behind bars. Is that not “being held responsible”?

Next, she argued that it makes prosecutions harder. Heightening the prosecutorial burden is not a legitimate reason to mangle statutory language toward a harsher result across the board. Ultimately, McClure’s point is that prosecutors could handle the lower standard because ethical prosecutors will be constrained by prosecutorial discretion, totally ignoring the fact that almost unfettered prosecutorial discretion in the US is the main reason why we have mass incarceration. She also ignored how “drug-induced homicide” prosecutions in general were implemented as a way to fight large-scale distributors of drugs, but now ensnare family and friends of the deceased person about half of the time.

Her last reason to scuttle Burrage amounts to policy concerns. She blamed doctors overprescribing for the overdose crisis, and yet, earlier in her paper, noted “a steady rise in successful criminal prosecutions of physicians, from just 15 convictions in 2003 to 43 in 2008.” By federal prosecutors’ logic, then, maybe they could be sent to prison along with the doctors, since opioids were regularly overprescribed in the 1990s and 2000s following pharmaceutical representatives’ marketing, which claimed “pain” (or, the lack thereof) was the “fifth vital sign.” Prosecutors from the US Department of Justice also secretly documented how Purdue Pharma executives knew they were setting the stage for the current crisis, all the way back to 2006.

Doctors are actually a relatively risk-averse population, which makes sense considering most practice “defensive medicine,” or practicing in a way more certain to limit malpractice suits, even if that means putting patients through extra costly, unhelpful tests. Now that they understand the fallout of earlier prescribing habits, more and more are going the other way by slashing or even ending opioid prescriptions. Looming, direct threats by prosecutors seem to be part of that picture.

McClure’s resume lacks any kind of experience in public health, pharmacology or epidemiology. No matter: The Supreme Court handles patent law cases, but not one justice is a scientist, as Dr. Alex Berezow, a microbiologist who has written books on junk science, once lamented at the Wall Street Journal.

Sadly, it seems that the time-honored practice of giving attorneys a license to decide matters they know little about will not end anytime soon. But the Burrage ruling, inadequate and fragile as it is, deserves to be widely known and strongly defended.