Why Democratic messaging on Trump's disastrous pandemic failures has been uncoordinated, passive and ineffective 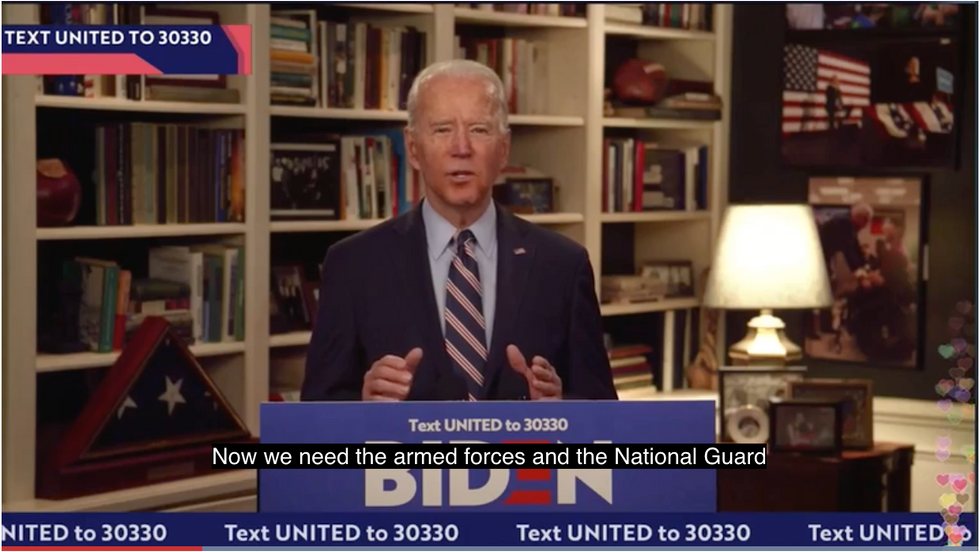 The disastrous incompetence and downright insanity of Donald Trump’s coronavirus response has now become the issue – the only issue – in American politics, in the 2020 election, and in the health and lives of millions of citizens.

The stakes of the November election have now become incomprehensibly high and the result seems likely to turn almost entirely on whether Donald Trump is successful in his furious attempts to shift the blame for his staggering, murderous ineptitude onto Democrats, the media and foreigners.

Which explains the recent spate of hard-hitting – but siloed – ads on Trump’s failures from the Biden campaign and the Democratic PACs Priorities USA and American Bridge. But the critical question for Democrats is whether they are doing enough to organize, align on messaging, and hammer home the reality of Trump’s failures to the electorate. Or does the somewhat scattershot approach we’ve seen in the early stages of this pandemic show that Democrats are still too uncoordinated, passive and ineffective to litigate the issue effectively?

On one hand, despite Trump’s massive failure to protect the country, his overall approval rating is now at its highest point ever. In fact, 60 percent of Americans actually approve of his specific handling of the coronavirus crisis despite shocking missteps coming to light and amid a mounting death toll.

And Trump has been able to continue spewing a fountain of mendacious self-promotion through his daily press briefings. As a result, not only do Republicans and Fox News viewers disproportionately continue to think the coronavirus threat is exaggerated (which has led to deadly public policy choices, especially in some Republican-led states), but Trump is also getting the kind of free media coverage (which benefitted his campaign to the tune of $2 billion in 2016) that could allow him to swamp any ads Dems run against him.

On the other hand, there are indications that polling results may be lagging current events as Americans race to catch up mentally with everything that has happened in just a few weeks. Navigator Research’s tracking poll found that net approval of Trump’s handling of the crisis dropped by 13 points in the past week. So, we may have to wait a while to see a fuller public reckoning with Team Trump’s responsibility for this disaster.

In addition, the fact that White House staffers have been begging for the Trump SuperPAC to provide positive advertising “air cover” – hardly the usual role for an “independent” attack-dog group – is a bellwether of just how much fear exists in Trump-world. And historically, the bump in Trump’s polling support seems anemic compared to what Presidents usually receive during national crises. As political scientist Rachel Bitecofer, Senior Fellow at the non-partisan Niskanen Center, put it: “He is enjoying a small rally-around-the-flag effect, but it’s smaller than any other president would have received. [His approval] should be in the 80s – a normal, functional president would be – so the fact that it’s only 60 tells you a lot.”

While it is uncertain where things will go from here, and whether Democrats’ current efforts will be enough, it is definitely clear that Democrats have so far not engaged with the same aggression, coordination, and vigor as Republicans have been willing to in previous public health crises. Even the head of one of the key Democratic outside messaging arms currently on the air against Trump acknowledges that Democrats are at serious risk of failing by “playing too nice.”

For comparison, consider how Republicans went after President Obama a mere six years ago during the 2014 Ebola outbreak. There was strong U.S. government leadership that successfully contained the threat in this country: a subsequent review found that, unlike the government’s response under Trump, the U.S. was spared from significant harm by applying “proven public health strategies as well as innovative new approaches to help control the Ebola epidemic in West Africa and strengthen public health readiness in the United States.” Of the 28,652 suspected, probable, and confirmed worldwide Ebola cases – including 11,325 deaths  – reported by the World Health Organization during that outbreak, only 11 cases and two deaths occurred in the U.S.

But what were Republicans saying? “The response had been inept, characterized by over-confidence and ill-considered procedures to protect U.S. healthcare workers… Any further fumbles, bumbles or missteps ... can no longer be tolerated” noted one senior Republican, adding “we have the head of the CDC, who’s supposed to be the expert, and he’s made statements that simply aren’t true.” “Not protecting our country and our families” said another. Others chimed in that the president “has no strategy” and is leading a “failed policy” that we would not have had to suffer from if his opponent had won in the last election.

And today, even as they’re in charge of the federal government’s pandemic response, Republicans are once again launching similar organized, partisan attacks against top Democrats.

So what is holding Democrats back from a similarly muscular, coordinated message on Trump’s deadly failures? Two top former congressional Democratic communications professionals – one with experience in House leadership, the other in Senate leadership – were granted anonymity to weigh in on these questions freely. Both saw a need for Democrats to step up the intensity and coordination of their criticism by overcoming three factors that have restrained Democratic messaging to date.

The former House staffer suggested that Democrats are having a who’s-on-first problem right now, one that is hard for them to control. Being only a presumptive nominee – one who holds no formal office – leaves Joe Biden with only so much that he can do to drive a compelling narrative: “The other party has the White House, and the President is giving daily briefings on substance and making news…so if you’re still just a candidate, how much can you do from the bunker?” He notes that other party leaders are not in an ideal position to drive messaging either. “Democrats in Congress are just taking this more seriously than Republicans as a public health crisis – Pelosi and Schumer are working on substance nonstop, plus the mechanics of how to pass things through their chamber, which takes up 90 percent of their time – so there’s not a lot left for calling press conferences every few hours.”

A second issue is that Democrats may be leery of being accused of "politicizing" the crisis. One “informal outside advisor” to Biden was recently quoted expressing concern that attacking Trump overtly would backfire, while The New York Times reported an “emerging split in Democratic circles about whether to attack Mr. Trump’s response to the virus in real time, or whether the gravity of the moment calls for a pause in negative political advertising and attacks.”

The former Senate leadership staffer suggested a third dynamic, which is that Democrats are just congenitally not so great at driving sharp, coordinated messaging, whereas recent history in both 2014 and the earlier 2009 H1N1 flu outbreak shows that Republicans are both more ruthless and synchronized during a crisis. As he put it, “if Republicans have a gene that makes them go for the political jugular, Democrats are born with one that makes us turn the other cheek.”

So what would a more aggressive push look like? Both communications experts emphasized the need for Dems to overcome their inhibitions and “agree on a sharp, tailored message and stick to it relentlessly,” and the former House staffer thought there is one clear choice for that message: the shocking Republican idea that American seniors should be sacrificed to get the economy moving again.  Not only do Americans hate Donald Trump’s idea of ending social distancing by Easter – with 74 percent (including 70 percent of Republicans) opposing (the president has announced that he is abandoning this timeline) – but the particular suggestion that seniors should bear the brunt of it (willingly, according to Texas Lieutenant Governor Dan Patrick) and die for the sake of the economy seems like a particularly ghoulish notion: “We as a party should be leaping out of the box in defense of seniors – these are the people that fought and won World War II, who raised us, and who are backbones of communities… we should be pounding on podiums everywhere to protect the life of every senior citizen.”

There are a number of strengths to this approach, including that Democrats could drive a deeper wedge within the Republican party between more practical moderates and the extreme Trumpists, and within the age 65+ demographic that shows up to vote at double the rates of young voters and has favored Republicans in four of the last seven elections.

But perhaps more importantly, by emphasizing the basic immorality of the sacrifice-our-elders push from Republicans, Democrats would reframe the discussion from a dry, scientific argument (epidemiological charts are in Democrats’ usual wheelhouse) to a far more emotionally-resonant, values-based discussion.

To get this done though, the former Senate staffer noted that Democrats would need all-hands-on-deck: “Congressional leaders need to agree on this approach with Biden, alert their members, and flood the zone with a succinct and biting message.”

This is not usually Democrats’ strength. And it is possible that Trump has fed himself enough rope to hang himself politically, with or without Democratic intervention. “Trump will not ultimately be able to spin himself out of this,” said Dr. Bitecofer. “We’re actually at the very beginning of the climb up the hill in the crisis, and from here the evidence of his ineptitude is going to start to come in and that’s going to be very hard for him to get around.”

But the experts also agreed that given how much is on the line for our country – and for people’s lives – Democrats should not hold back. “Trump’s said this stuff, and [Republicans] have stuck their chin out,” said the former House staffer. “We should rip it off.”