We must de-Trump the airwaves to protect public health 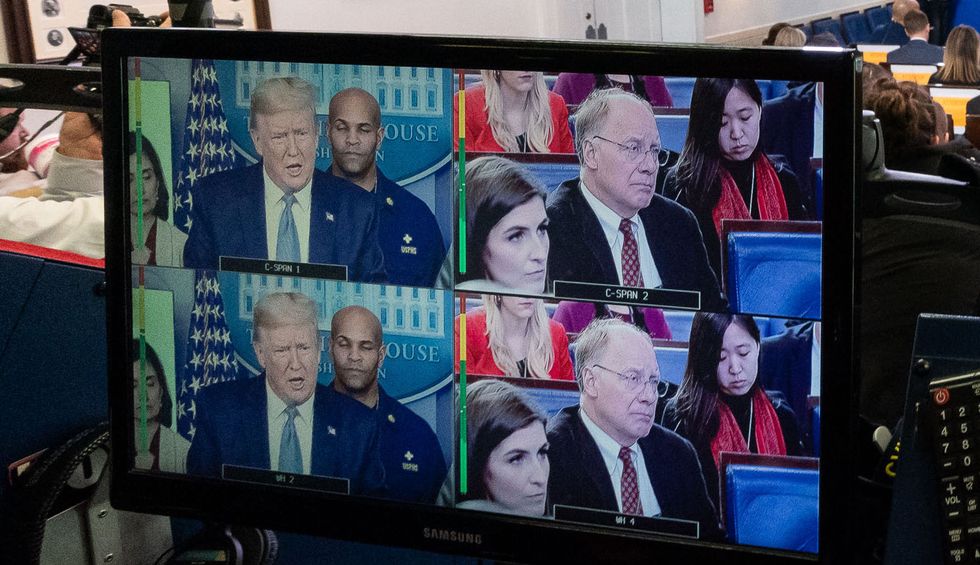 As COVID-19 spreads from city to city, neighborhood to neighborhood and house to house, misinformation is being spread over the public airwaves by syndicated right-wing personalities and the media conglomerates that air their programs.

In many cases, radio and TV hosts like Sean Hannity, Laura Ingraham, and Rush Limbaugh are simply following President Trump's lead as he convenes daily press briefings to boast about his supposed expertise, attack those he sees as political foes, demean the press corps, blame the disease's spread on immigrants and foreigners, and make false claims about the federal response to the global pandemic.

In other instances he's following the pundits' lead, using his daily national platform to repeat falsehoods he's gleaned from watching and listening to his favorite on-air personalities.

The fault for this deadly cycle of misinformation rests with those telling lies about the lethal virus. But the radio and television stations that broadcast these falsehoods without context or disclaimers deserve a portion of the blame.

The national broadcast footprints of Hannity, Ingraham, and Limbaugh are the byproducts of one federal agency's failure to fulfill its most fundamental duty—promoting localism and diversity among broadcast licensees. This failure has been going on for decades.

Stations that carry these right-wing TV and talk-radio hosts are owned by conglomerates that owe their massive scale and reach to the Federal Communications Commission, which has buckled to relentless broadcast-industry lobbyists, loosened ownership caps and allowed a few companies to take over thousands of local stations.

Sinclair Broadcast Group has been one of the biggest beneficiaries of this deregulation. The local-TV conglomerate, which now controls 193 stations reaching 40 percent of U.S. households, has a history of forcing stations to voice support for Trump's agenda. "America This Week," Sinclair's weekly news program hosted by conservative Fox-News alum Eric Bolling, has devoted recent broadcasts to a parade of Trump-administration officials parroting the president's propaganda.

While the FCC's failure to serve the public interest and hold broadcasters accountable has a history that predates this White House, it's found its perfect expression in the age of Trump, as his sycophants hijack the airwaves to label the global pandemic a conspiracy of the "deep state" or worse.

Last week, Free Press filed an emergency petition urging the FCC to investigate the spread of false COVID-19 information via broadcast outlets across the United States.

"The FCC possesses both the authority and the responsibility to ensure the public airwaves are utilized in the public interest," reads the petition co-authored by Free Press Co-CEO Jessica J. González and Senior Policy Counsel Gaurav Laroia. "This duty is heightened in times of crisis. Specifically, broadcasters are prohibited from knowingly airing false information about a catastrophe that causes 'substantial public harm.'"

González and Laroia are citing a 1992 decision by the agency in which it adopted a rule against broadcast hoaxes after weighing broadcaster public-interest obligations against their First Amendment rights. The agency concluded that it does have a "compelling interest in preventing substantial public harm," and that "the First Amendment does not preclude civil liability for broadcasts that create a foreseeable risk of personal injury."

Life, Death and the FCC

"Wide broadcast of ... the president's false statements have contributed to the cavalier attitude some have taken toward containing coronavirus and mitigating its spread," write González and Laroia.

The Free Press petition catalogs several incidents in which both radio and television broadcasters have aired dangerous misinformation about coronavirus, leading to real personal harm and even death. One instance is the death of an Arizona man and hospitalization of his wife after they ingested the drug chloroquine phosphate.

The woman told reporters they had "watched televised briefings during which President Trump talked about the potential benefits of chloroquine." Even though the FDA had yet to fully approve its use to treat coronavirus, she believed it was safe because it was "the stuff they're talking about on TV."

The petition also lists several false statements by Limbaugh, who owes much of his talk-radio success to public policies that allowed iHeartRadio (formerly Clear Channel Communications) to amass a network of more than 1,000 local radio outlets. Many of these stations pump out Limbaugh's syndicated programming to reach a potential audience of more than 100 million.

Free Press has asked the FCC to immediately issue an emergency policy statement urging broadcasters to prominently disclose when information they air is false or scientifically suspect.

"This is a life or death issue," write González and Laroia. "We request the Commission’s urgent attention." You can ask the agency to take action, too.