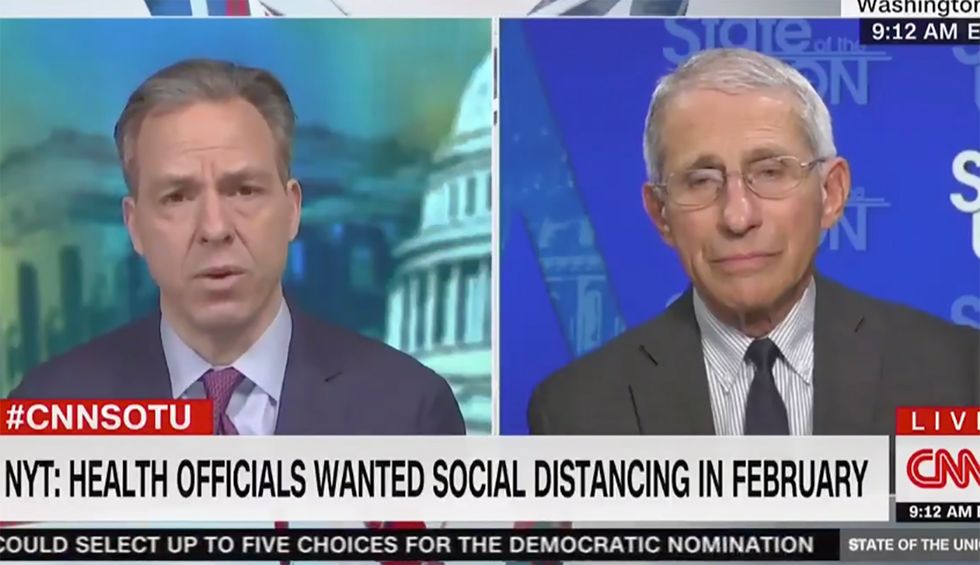 Every day there is new evidence of how Donald Trump neglected to act responsibly to prevent the loss of thousands of American lives. This week we learned that "Top White House advisers as well as experts deep in the Cabinet departments and intelligence agencies all sounded alarms and urged aggressive action to counter the threat from the coronavirus, but President Trump remained slow to respond."

We also learned, through the release of a series of "Red Dawn" emails that circulated in the White House, just how determined Trump was to ignore the warning signs of imminent disaster. Even America's preeminent expert on pandemics, and a member of Trump's Coronavirus Task Force, Dr. Anthony Fauci, responded with stark honesty on CNN's State of the Union to the question of whether fewer lives would have been lost had Trump acted sooner:

"You could logically say that if you had a process that was ongoing and you started mitigation earlier, you could have saved lives. Obviously no one is going to deny that ... But there was a lot of pushback about shutting things down back [in February]."

DR. FAUCI on CNN: "You could logically say that if you had a process that was ongoing and you started mitigation ea… https://t.co/HKwUHzvpMO
— Aaron Rupar (@Aaron Rupar) 1586704216.0

In other words, Trump & Co. allowed a pandemic to spread so that they wouldn't lose money or risk hurting his reelection prospects. In will be interesting to see if Dr. Fauci survives this truth telling when Trump is told about it. (UPDATE: Trump retweeted a post calling for him to fire Fauci).

In another demonstration of the invaluable service that the media is capable of providing, CNN's Jake Tapper delivered an editorial examining the Trump administration's plan (or lack thereof) for dealing with the COVID-19 crisis. The segment (video below) included a compilation of Trump's badgering of reporters and his impotent attempts to intimidate the White House press corps. Tapper led off by noting that "Trump is taking questions from reporters nearly every day, but that does not mean he's answering them."

What followed was a stream of examples of Trump lashing out at journalists who were simply doing their jobs. But his childish put downs were pathetic at best, and they only served to reveal his barely veiled fear. He called seasoned reporters "third rate." "disgraceful," and "nasty." He interrupted them before they could complete their questions. And his answers, more often than not, dodged the substance of the questions.

This just adds to the argument that Trump should not even attend these briefings. He has no useful knowledge or experience to offer. To the contrary, he most often unleashes blatantly false “information” that his own advisers have to later refute. He wastes valuable time either attacking legitimate journalists who are asking pertinent question, or embracing propagandists whose questions are nothing more than overt suck ups.

There is only one reason that Trump is showing up at these briefings, and that is to advance his reelection prospects. He has turned what should be a vital information channel into a crass campaign PR affair. Then he tries to make a preposterous argument about the ratings, saying that they are indicative of his alleged popularity.

Tapper summed up his remarks by asking Trump another question that he surely will not answer: "Attacking journalists who ask questions does not make those questions go away. It only reveals that you might not have the answers. Again, sir, respectfully, what is the plan for a way out of this? Do you have one?" If Trump responds to that question at all, it will likely be in the form of tweet that merely says "FAKE NEWS" in all caps without ever referencing the original question about whether or not he has a plan. But that hardly matters. The American people already know the answer to that question.