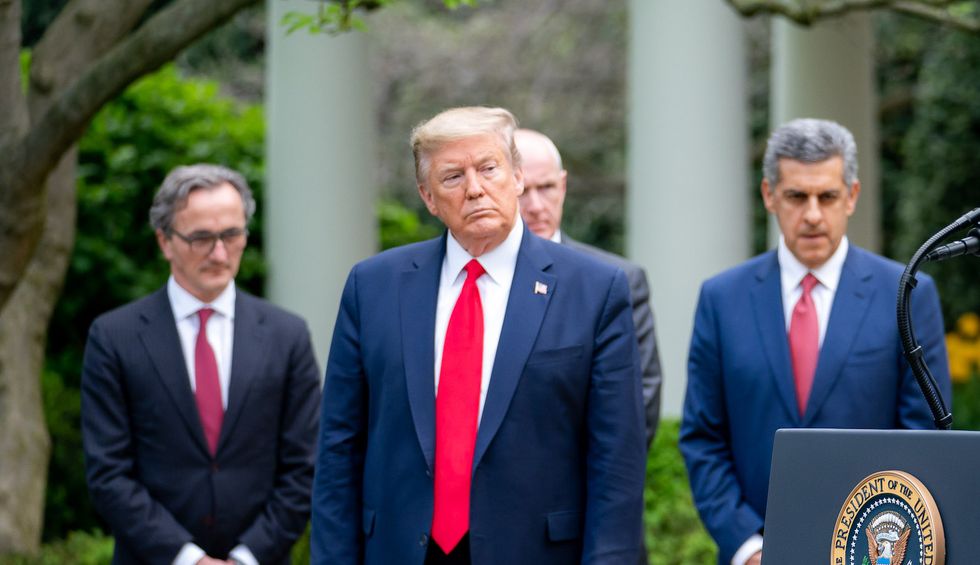 Much of the right-wing media — from Fox News to AM talk radio stations to Breitbart News — has been applauding President Donald Trump’s response to the coronavirus pandemic. First, they joined Trump in claiming that coronavirus was a liberal “hoax”; after Trump changed his tone and finally acknowledged that COVID-19 was a pandemic, they exalted Trump as a strong leader during a health crisis. But The Bulwark is one right-wing outlet that been consistently critical of Trump’s response to coronavirus — and conservative Tim Miller, in an article for that publication, offers a damning timeline that shows how badly Trump dropped the ball when he should have been preparing for a colossal storm.

Miller, who has been active in the Republican National Committee (RNC) and served as communications director for former Florida Gov. Jeb Bush, lays it out perfectly in his article and shows that back in January and February, Trump was in denial about COVID-19’s deadly potential.

“In the social media fog of war, it can be easy to lose the thread as to just how the COVID-19 crisis came to our shores and what the Trump Administration did and didn’t do to respond,” Miller explains. “This timeline provides a look at the key inflection points in the crucial ten-week period where the United States lost the ability to effectively respond to the virus that is causing unprecedented death and economic destruction.”

Miller’s coronavirus timeline starts on January 3 and ends on March 20. And while the timeline shows Trump’s evolution on coronavirus, it also shows that he was asleep at the wheel in January and February.

On January 18, Health and Human Services Secretary Alex Azar tried to warn Trump about the COVID-19 threat. But Trump was more interested in talking about vaping. And on January 21, the CDC tweeted that the first COVID-19 infection had been reported in the U.S.

Miller’s article goes on to list some of the clueless things that Trump said about coronavirus — on January 22, for example, “We have it totally under control. It’s one person coming in from China.” And on February 2, Trump told Fox News’ Sean Hannity, “Well, we pretty much shut it down coming in from China.” A February 10 press conference found Trump saying, “A lot of people think that goes away in April with the heat — as the heat comes in.”

On March 10, Miller notes, Trump told reporters “It will go away. Just stay calm. It will go away.” Subsequently, Trump dramatically shifted his tone and acknowledged that the U.S. was facing a deadly threat. And the timeline ends with White House Senior Adviser Jared Kushner, on March 20, saying that he was building a team to address the coronavirus crisis.