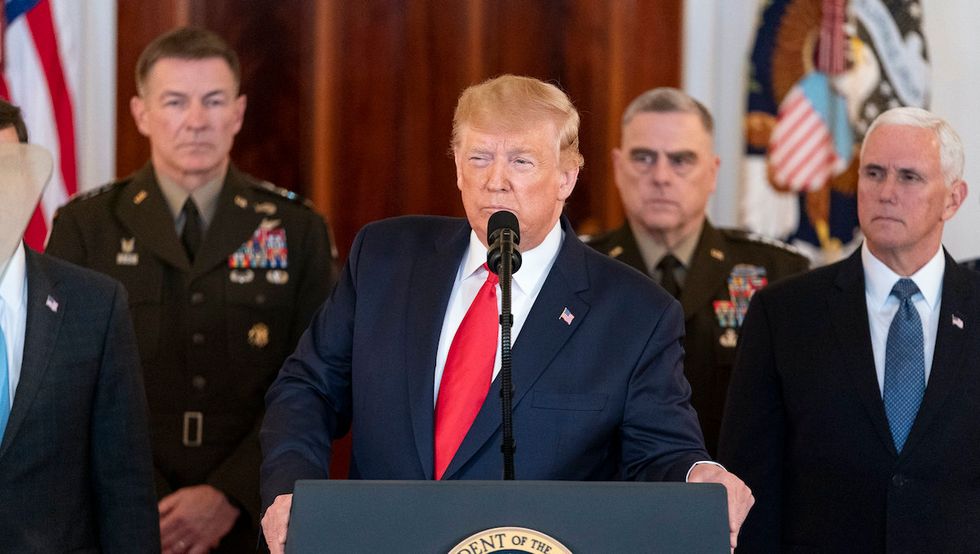 As the coronavirus pandemic wreaks havoc on world economies, claims tens of thousands of lives, and cripples healthcare systems worldwide, President Donald Trump took to Twitter Wednesday to threaten to attack Iran and make the country "pay a very heavy price" for any "attack on U.S. troops and/or assets in Iraq."

The threat comes on the heels of the Trump administration crippling Iran's access to crucial medial supplies as it battles over 47,000 confirmed cases of COVID-19 by ramping up a sanctions regime on Iran that leading economists said was "feeding the coronavirus epidemic" and progressive organizations and Democrats said must be eased in light of the deadly disease.

"Unsatisfied with a global pandemic and an economic collapse, Trump wants to add a major war into the mix," Stephen Miles, executive director of Win Without War, said on Twitter in response to Trump's tweet.

Miles detailed "a series of escalations" the White House has taken with Iran since Trump took office, including his 2018 formal departure from the Iranian nuclear deal.

"It's impossible to say with certainty right now what is happening on the ground that's leading to this latest talk of war, but one thing is clear, we did not have to be here," said Miles. "The President chose to put us on this path and he continues to own the consequences of his actions."

Trita Parsi, executive vice president of the Quincy Institute for Responsible Statecraft, also weighed in on Trump's latest threat with a tweet pointing to how actions the adminstration has undertaken to purportedly rein in Iranian aggression have backfired, citing the January assassination of Iranian general Qassem Soleimani as one example.

According to Rep. Ro Khanna (D-Calif.), Trump's threatening tweet underscores the need for legislation Khanna introduced earlier this year to prevent the president from military action against Iran without congressional approval.

Other observers drew attention to the legal language Trump used in the tweet—"Upon information and belief."

"The United States is threatening wars now based on the standard lawyers use when making allegations they can't necessarily prove," said MSNBC analyst Matthew Miller.

According to the White House schedule, Trump had his intelligence briefing at 12pm today. At 1:05pm, he tweeted th… https://t.co/tEmsseI1fW
— Andrew Desiderio (@Andrew Desiderio)1585760991.0

The president's latest threat towards Iran came a week after United Nations Secretary-General António Guterres called on nations everywhere to declare an immediate ceasefire to instead battle COVID-19, which he called "the true fight of our lives."

"The fury of the virus illustrates the folly of war," Guterres said.