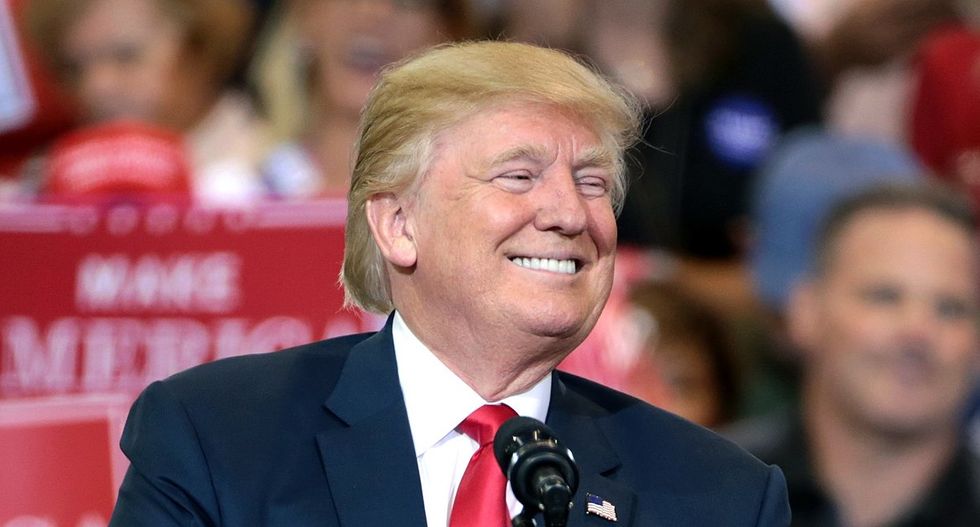 President Donald Trump wasted no time in attempting to create divisions between Democrats, calling on supporters of Sen. Bernie Sanders to join the GOP less than an hour after the Vermont lawmaker announced he was suspending his campaign for president—leaving former Vice President Joe Biden a clear shot at the nomination.

Trump said in a tweet after Sanders' announcement that Sen. Elizabeth Warren (D-Mass.) was to blame for his failed campaign and said it all ended "just like the Democrats and the DNC wanted"—an obvious attempt to intra-party tensions.

"This guy is nothing if not a skilled provocateur," tweeted journalist Doug Henwood.

Sanders announced Wednesday that he would suspend his campaign after a series of losses and a primary election season that had become potentially lethal to voters due to the coronavirus outbreak crippling the country. The Vermont lawmaker promised supporters that "the struggle continues."

"While this campaign is coming to an end, our movement is not," said Sanders.

In a statement, Trump's campaign appeared eager to reignite some of the divisions that resulted in the 2016 election, after Sanders was defeated for the nomination by Hillary Clinton.

"Democrat elites shoved Bernie Sanders to the side the second time," the campaign said, referring to the drawn out 2016 Democratic primary battle between Sanders and Hillary Clinton, "leaving many of his supporters looking for a new home."

Young Turks reporter Emma Vigeland warned that Trump's efforts—nefarious and transparent as they are—should raise concerns over internal party divisions that need to be resolved in order to bring Democrats together irrespective of the president's cynical attacks.

"So long as the Democratic Party continues to kick its progressive base in the teeth, Trump will keep winning," said Vigeland. "All he needs is a kernel of truth to continue to undermine faith in the system."

"Sources close to my eyes reading this tweet tell me Trump will try to exploit resentment and suspicion among some Bernie Sanders supporters to peel them off from Biden and/or keep them home," tweeted Seitz-Wald.

Journalist Paul Blest, while acknowledging the frustration for progressives at another defeat for Sanders by the Democratic Party establishment, noted that the data shows Sanders backers are unlikely to support Trump and most will vote for Biden.

"Polls consistently showed Bernie voters were by far the most hostile to Trump," said Blest, "so I don't think it's a particularly hard lift for a lot of people."