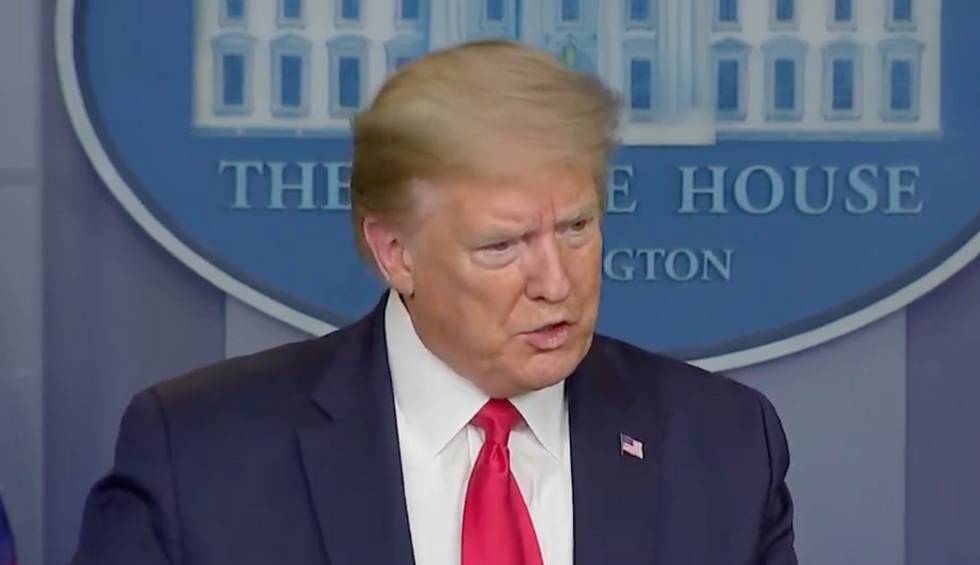 President Donald Trump threw an ally under the bus on Wednesday after sending mixed messages about plans to "reopen the economy" for weeks.

Republican Gov. Brian Kemp of Georgia has come under fire — rightly — for pushing to loosen restrictions on businesses in his state in the wake of the coronavirus.  By Friday, the state is expected to allow a wide variety of business establishments to open their doors once again, even though it has not met the administration's guidelines of seeing a 14-day decline in cases before easing the state lockdown.

Georgia has not seen a 14-day downward trajectory in the rate of new cases, according to data from the state's department of health. Nearly 90,000 tests have been conducted in the state of more than 10 million people. Of the total tests, about 23% were positive, with nearly 20,000 confirmed cases and 800 deaths as of Tuesday.

But it's not hard to see why Kemp wanted to roll back restrictions, despite health experts' warnings, because Trump himself had loudly endorsed a series of protests against state lockdowns. Trump even sent a barrage of tweets calling to "liberate" three states run by Democratic governors from their shutdown orders. Even prior to the emergence of these protests, Trump was clearly eager to see the country resume normal economic activity as soon as possible; he had previously projected that the country could reopen on Easter, though that idea gained little traction.

"I told the governor of Georgia, Brian Kemp, that I disagree strongly with his decision to open certain facilities which are in violation of the Phase 1 guidelines for the incredible people of Georgia," Trump said. "But at the same time, he must do what he thinks is right."

"I would tell him that he should be careful," said Fauci. "I would advise him not to just turn the switch on and go because there is a danger of a rebound."

This was a sharp turn from the discussion of Georgia's plan the previous day. When asked about Kemp's plan on Tuesday, Trump only had praise for the governor and vague opinions about the decision.

"So he's a very capable man. He knows what he's doing. He's done a very good job as governor — Georgia. And — and, by the way, and South Carolina. Governor McMaster also. So you have two very capable people. We're going to find out," Trump said. "And, in fact, I'm scheduled to speak to the governor of Georgia in a little while. But we'll — we'll find out."

Now, as the deadline for Kemp's reopening approached, Trump is sending a very strong message that he disapproves. That leaves the Georgia governor in a tight spot — one that Trump has put him in. It was Trump who politicized the idea of reopening the economies, clearly signaling for his allies to do it as quickly as possible or potentially face the wrath of his supporters. But once Kemp committed to that path, Trump backtracked — meaning the governor must either pursue the dangerous course alone or admit he made a potentially disastrous blunder.

It's hard to have much sympathy for him, because one can't expect any better when falling in line behind Trump. But it's emblematic of Trump's abysmal leadership that even those who are supposed to be his allies can be forced in such an unenviable position.