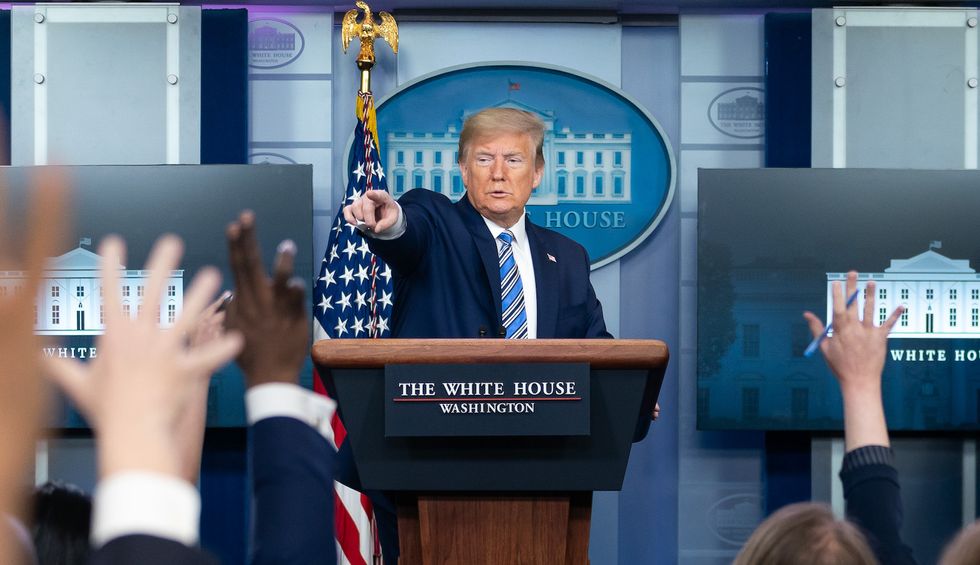 Speaking at the daily coronavirus press briefing on Monday, President Donald Trump tried to take a victory lap over the fact that the need for ventilators is coming in well below what many feared.

While New York Gov. Andrew Cuomo once desperately urged that he needed between 30,000 and 40,000 ventilators to ensure that COVID-19 patients in his state would have the support they need during the peak of the crisis, he now believes the peak had passed without ever needing that amount. Nothing is certain, and it's possible that future waves of the outbreak could bring a higher peak yet, but for now a ventilator shortage does not appear imminent. As the New York Times reported: "[The] urgency has receded for now. While the city’s coronavirus death toll continues to mount, hospital admissions are trending down, and intensive-care units seem to have enough ventilators."

This led Trump on Monday to cite a recent piece by National Review's Rich Lowry: 'How the Media Completely Blew the Trump Ventilator Story,' claiming vindication.

"It was all ventilators," Trump said, arguing that this was just a line of attack from his critics. "We are now the king of ventilators."

In his piece, Lowry argued that, despite howls from Democratic governors, public health officials, and those in the media that the president wasn't doing enough to address the ventilator shortage, the Trump administration "handled the potential shortage deftly."

Lowry accuses the media of botching coverage of these events as a way to attack Trump. And it is true that, unlike Cuomo and others, Trump was optimistic that we wouldn't need more ventilators than we had and, at least at this point, his prediction has proven right.

But the problem is that this isn't sound leadership — hoping for the best and getting lucky. Since the start of the crisis, this has been Trump's entire approach. He assured the country the virus wouldn't be coming from China. He said the stock market would be doing great. He said the cases would go down from 15 to close to zero. He said the states would get the personal protective equipment they needed. He said the tests were perfect, and that everyone who wanted a test could get a test. He has said, repeatedly, that we have enough tests in the United States, even though we don't.

All of these were lies and broken promises. The U.S. testing regime has been consistently delayed and disastrous, with far too few tests compared to the need, though the situation has improved since the early days of the crisis. And the lack of adequate personal protective equipment has been widely documented, and it has likely contributed to many cases of medical professionals and others contracting COVID-19 on the job.

The problem is that, from the start, Trump never took the downside risks of an outbreak seriously enough. Ironically, this is a fair criticism of the media, too — few were warning at the start of the crisis in January about what the situation might look like now. However, the mainstream media and many Democratic politicians were much quicker to react to the worsening crisis than Trump and right-wing pundits were as they realized that the worst-case scenario was becoming more likely.

One part of the worst-case scenario — a widespread ventilator shortage, as seen in Italy — hasn't yet come to pass in the United States. But other parts — tens of thousands dead, inadequate testing, PPE shortages have — are now reality, and we're living with the costs.

When a ventilator shortage seemed possible or likely based on public health officials' projections, it made sense to warn about it. Now that it hasn't come to pass, we should all be glad about that. But those who warned about the possibility of disaster shouldn't be criticized for doing so just because it didn't happen. In fact, fear of seeming alarmist at the beginning of this crisis may have left many unprepared for our present situation, and the media would be wise to recalibrate its concerns about overhyping threats. Even if a dreadful scenario has a small possibility of occurring, we should be very concerned about preventing it. Encouraging people to dismiss low-probability calamities would guarantee that many more unmitigated disasters would occur.

And from a broader perspective, it's clear Trump's disposition to dismiss risks and hope for the best has been negligent and catastrophic. In the case of concerns about a ventilator shortage, it may have worked out alright. But we're living through an ongoing crisis that was almost certainly severely exacerbated by his inaction, and it's still not clear how we'll get out of it.