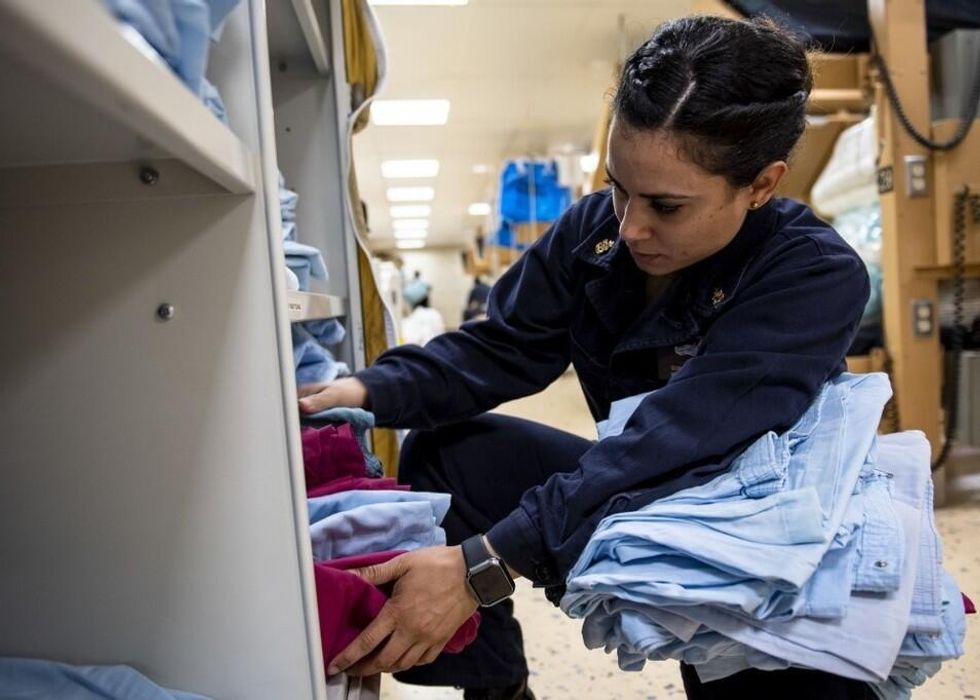 Chief Hospital Corpsman Dom Navarro, from Orange County, Calif., counts patient gowns in the medical ward aboard Military Sealift Command hospital ship USNS Mercy (T-AH-19) March 26. Mercy deployed in support of the nation's COVID-19 response efforts and will serve as a referral hospital for non-COVID-19 patients who are admitted to shore-based hospitals. This allows shore-based hospitals to focus their efforts on COVID-19 cases. One of the Department of Defense's missions is defense support of civil authorities. DoD is supporting FEMA, the lead federal agency, as well as state, local and public health authorities in helping protect the health and safety of the American people. (U.S. Navy photo by Mass Communication Specialist 2nd Class Ryan M. Breeden)
Joan McCarter
and
Daily Kos
April 14, 2020

As many as 2 million uninsured people could end up being hospitalized with the novel coronavirus, according to an analysis released last week by the Kaiser Family Foundation (KFF). Hospitals could need as much as $42 billion in reimbursements for their treatment. The Trump administration says it will use $100 billion from the recently passed Coronavirus Aid, Relief and Economic Security (CARES) Act to cover these costs, but that could still leave many uninsured vulnerable, as KFF president and CEO Drew Altman points out: "While the details are spotty, uninsured patients could still be on the hook if they test negative for coronavirus and if they receive care outside hospitals."

One way to reduce the number of uninsured would be for the administration to open a Special Enrollment Period for the Affordable Care Act for both uninsured and underinsured people. Congressional Democrats on the key health care committees have written to key Trump administration officials asking for just that: "It is imperative that uninsured and underinsured Americans have access to comprehensive coverage through Healthcare.gov during this crisis," they write, "and that further steps be taken to assist Americans who could benefit today from existing Special Enrollment Periods (SEPs)."

The lawmakers slam the administration for its "promotion of non-ACA compliant junk plans,

such as short-term limited duration plans and those offered by health care sharing ministries," pointing out that this "causes further confusion and may expose consumers to substantial financial harm." Many of these junk plans won't cover all aspects of testing and treatment. They are exempted from the preexisting conditions exclusion ban that ACA-compliant plans operate under, and can decide to limit coverage based on that or choose to limit the amount of coverage they'll provide under caps.

Democrats also want to make sure that people who can sign up under existing special enrollment period rules—the loss of their jobs and employer-based coverage, for example—don't have too many hurdles. Providing all the necessary documentation to prove their job loss when there's general massive unemployment and chaos for their former employers in addition to trying to figure out what their annual household income is going to be could prove too difficult for many to overcome. Congressional Democratic leaders are demanding that the administration—the departments of Treasury, Health and Human Services, and Labor—work together to fix this.

That's only part of the puzzle, though, because these are people who are mostly eligible for ACA insurance and don't fall into the Medicaid gap that still exists in the 14 states that have refused to expand the program. One thing Democratic lawmakers from some of those states want to see in the next spending package, CARES 2, is enticements to those states to take the Medicaid expansion—specifically a 100% federal commitment to paying for it for three years.

Trump is, by the way, still refusing to open up Healthcare.gov to special enrollments to help all the uninsured and underinsured who don't qualify under the existing rules. He's also still trying to have the entire ACA overturned by the Supreme Court. In the middle of a pandemic. With coronavirus infection likely to be the latest preexisting condition insurers would look for if they could operate without rules again.