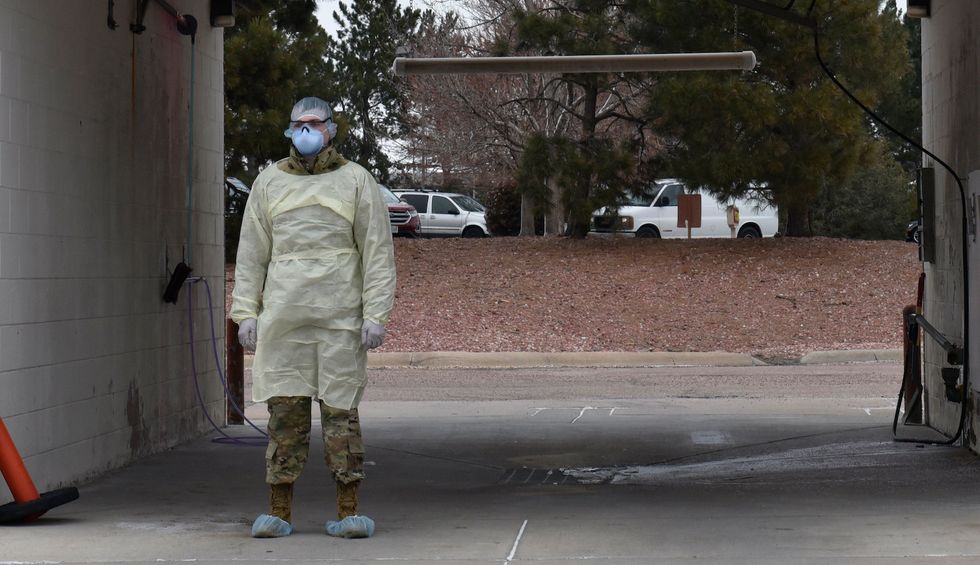 Peterson Air Force Base, Colorado medical professionals established a COVID-19 testing location at the car wash, March 20, 2020 to help limit the possible spread of the virus. The consolidation of patients to this area will help minimize the exposure to COVID-19. If there is concern that you or someone in your family has been exposed to COVID-19, please call (719) 524-2273 first to obtain an appointment. Without an appointment, individuals will be turned away at the test location. (Air Force photo by Airman 1st Class Alexis Christian)
Cody Fenwick
April 20, 2020

A new idea experimental medicine is starting to gain traction in the age of coronavirus, though in ordinary times, it wouldn't even be under consideration.

It comes down to this question: Should researchers working on a vaccine for COVID-19 recruit human test subjects who will be intentionally exposed to the deadly disease?

It's a fraught question, but it's worth taking seriously. The world has been turned upside down by the coronavirus, and the best way to stop the pandemic is a vaccine, which will likely take more than a year to develop.

Typically, vaccines are tested in randomized controlled trials that monitor at least two groups: one group who received a potential vaccine, and another that received merely a placebo. The subjects are allowed to carry out their lives, with the researchers periodically checking in on their health status. If the recipients of the vaccine can be shown to have had a significantly smaller risk of contracting the disease in question at the end of a trial period, without a significant number developing serious side effects from the vaccine, then it can be deemed a success.

The problem is that this takes a while. Many candidate vaccines won't work, and researchers need to allow enough time to pass to see if the injections really do provide genuine, sustained protection. But with a pandemic spread across the globe, every day we wait for a vaccine brings more death.

So some researchers want to speed up the process.

The answer is called a challenge trial. In a challenge trial, instead of letting subjects go about their lives as normal and assessing their response to a generic level of risk, they are instead deliberately exposed to a pathogen — in this case, the coronavirus that causes COVID-19.

In a recent paper for The Journal of Infectious Diseases, researchers Nir Eyal, Marc Lipsitch, and Peter Smith laid out how such a trial could be done and how it could circumvent the usual ethical objections to such a trial. They explained:

Volunteers, previously uninfected, would be required for an initial dose-escalation study of the viral challenge to select a dose of virus exposure such that most placebo recipients become infected (for statistical reasons), and have a clinical response that is not more severe than the one associated with natural infection (for ethical reasons).

The idea is to make sure that the subjects are informed about the risk, are generally young and healthy and thus not particularly vulnerable to COVID-19, and receive excellent health monitoring and treatment for any symptoms that arise.

In a recent piece for the New York Times about the future course of the pandemic, journalist Donald McNeil explained the reaction to the idea:

Challenge trials are used only when a disease is completely curable, such as malaria or typhoid fever. Normally, it is ethically unthinkable to challenge subjects with a disease with no cure, such as Covid-19.

But in these abnormal times, several experts argued that putting a few Americans at high risk for fast results could be more ethical than leaving millions at risk for years.

“Fewer get harmed if you do a challenge trial in a few people than if you do a Phase 3 trial in thousands,” said Dr. Lipsitch, who recently published a paper advocating challenge trials in the Journal of Infectious Diseases. Almost immediately, he said, he heard from volunteers.

Others were deeply uncomfortable with that idea. “I think it’s very unethical — but I can see how we might do it,” said Dr. Lucey.

The authors of the article in The Journal of Infectious Diseases explain, though, that even if the idea makes us uncomfortable, we should consider the fact that many people are already putting themselves at risk of catching COVID-19 for the greater good.

"It may seem impermissible to ask people to take on risk of severe illness or death, even for an important collective gain," they wrote. "But we actually ask people to take such risks for others’ direct gain every time we ask volunteer firefighters to rush into burning buildings, relatives to donate a live organ to loved ones, healthy volunteers to participate in drug and vaccine toxicity trials with no prospect of improving their health (and some risk of undermining it), relatively healthy volunteers to participate in studies involving long antiretroviral drug interruptions that risk their health with negligible prospect of improving it, and other challenge studies in which healthy volunteers expose themselves to pathogens."

And of course, medical professionals and other workers deemed "essential" are currently putting themselves at heightened risk of contracting COVID-19 every day for the good of society.

Right now, the most optimistic prediction for the arrival of a vaccine through the usual research methods is one year to 18 months. It could easily be longer than that. With the virus still rampaging through the population, even with mitigation measures in place, our communities will suffer untold death and damage as we wait for a vaccine. If a human challenge trial reduces the time it takes to get a viable vaccine distributed to the public — an additional complication that extends the length of time before a vaccine is widely available — then many, many more lives could be saved than would be at risk in the human challenge.

To make this risk acceptable, however, we'd have to ensure that the subjects of the study were fully informed about the dangers they faced. And they would be isolated from the outside population for the duration of the infection so as to avoid spreading it to others.

The author listed an addition six reasons that the risk to the subjects from the study would be lower than it might otherwise seem:

First, the study will recruit only healthy patients from age groups in which the risk of severe disease and death following SARS-CoV-2 infection is low. Second, there is the possibility that the vaccine candidate will protect at least some of those who are vaccinated. Third, in the absence of an effective vaccine, a high proportion of the general population is likely to be naturally infected with SARS-CoV-2 at some point, including those who might participate in a challenge study; by volunteering to be artificially infected they may be just hastening an event that is likely to occur in later months anyhow. Fourth, only people with an especially high baseline risk of getting exposed during or soon after the trial period should be recruited (eg, people residing in areas with high transmission rates). Fifth, participants would be monitored carefully and frequently following the challenge and afforded the best available care if needed (eg, guaranteed access to state-of-the-art facilities of the health system, notwithstanding the possibility of severe shortages of medical care during the evolving pandemic). Sixth, by the time vaccine candidates are being tested, some therapeutics may be approved, which may reduce participants’ risk of morbidity and mortality further. For these 6 reasons, mortality and morbidity from participation notwithstanding, net mortality and morbidity from participation should remain low or negative.