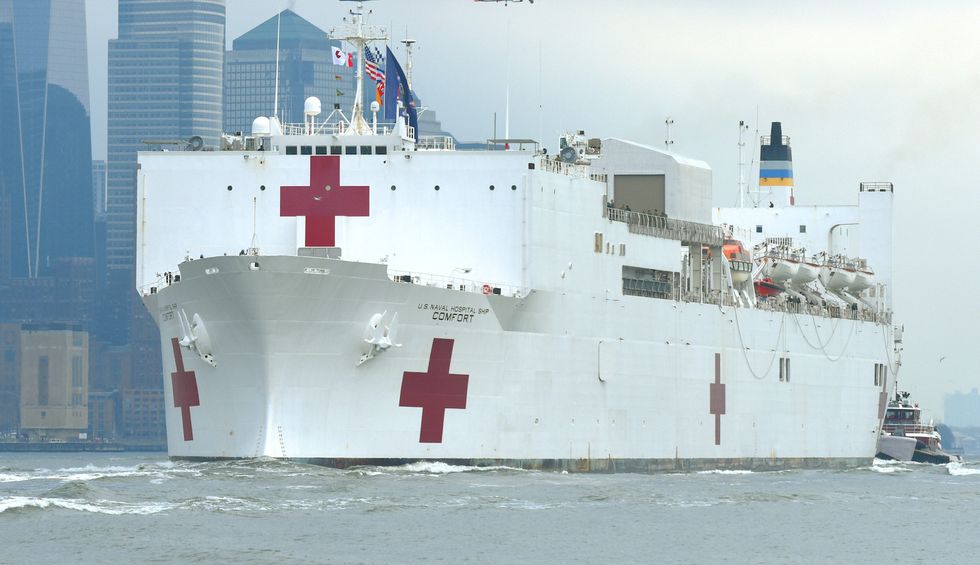 Michael Schwirtz at The New York Times reported Thursday afternoon that there were only 20 patients on the 1,000-bed Navy hospital ship docked in New York harbor specifically to take the pressure off the city’s hospitals overwhelmed by COVID-19 patients. The news infuriated hospital officials. Last week, President Donald Trump showed up in Norfolk, Virginia, to send the USNS Comfort to New York City, saying it would play a “critical role” in the fight against the virus. Said Michael Dowling, the head of Northwell Health, New York’s largest hospital system: “If I’m blunt about it, it’s a joke. Everyone can say, ‘Thank you for putting up these wonderful places and opening up these cavernous halls.’ But we’re in a crisis here, we’re in a battlefield.”

On Friday, the Department of Defense announced that, at the request of FEMA, it would change its protocol for accepting patients on the Comfort and two other facilities, in Dallas and New Orleans. There was no word about the USNS Mercy, a hospital ship docked in Los Angeles for the same purpose as the Comfort. That ship had 15 patients on Thursday.

In coronavirus-beleaguered New York City hospitals, health care workers have been told to reuse protective equipment, a practice that would have gotten them fired two months ago. Officials say the city’s hospitals will run out of ventilators used to treat the most seriously afflicted within a week or less. There are so many COVID-19 patients now being treated that they are dying in hospital hallways.

No COVID-19 patients were to be treated on the Comfort. The idea was to take care of patients with other problems to clear space in the city hospitals for those infected with the virus. But there were strict rules for who could and could not be accepted as a patient. Those measures were complicated by the fact that much of the usual patient load—from car accidents, violence, and the like—is far less than normal because so much of the population is staying home out of personal caution or because of state mandates.

The press release from the Department of Defense states:

These three DoD-supported locations will now provide support to COVID-19 positive patients in convalescent care, as well as low-acuity patients. These patients, who require a lower level of medical care, must first be screened at a local hospital.

We understand that introducing COVID-19 positive patients into the FMS environments elevates the risk of transmission to other patients and our medical providers.  This decision was risk-informed and made to ensure that DoD can continue to provide these local communities the type of medical care they most need. Force health protection is a top priority and our medical professionals will have the required personal protective equipment needed for this mission.

Too bad city health care workers don’t also have the proper equipment needed for their mission.