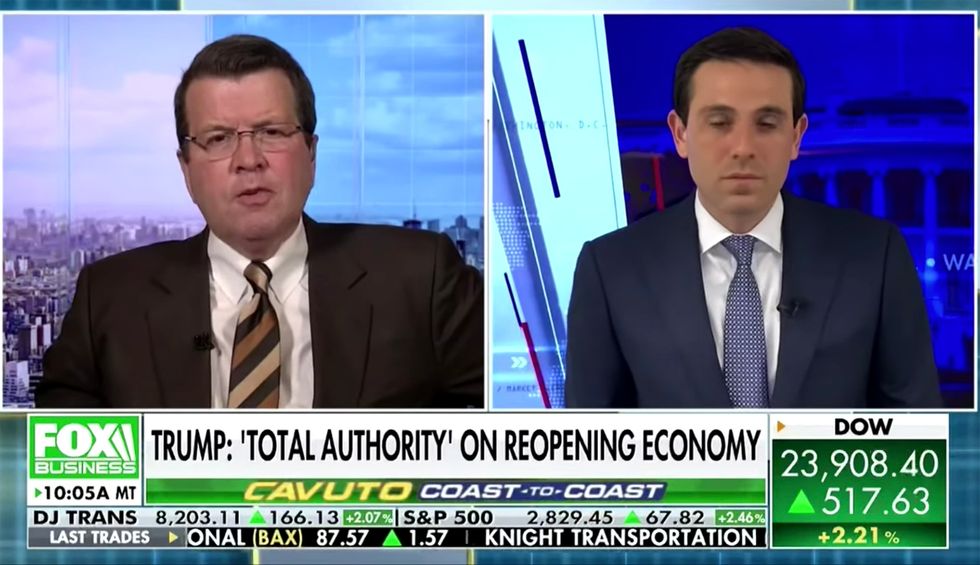 Fox Business host Neil Cavuto on Tuesday disagreed with President Donald Trump after he accused governors of a “mutiny” because they are coordinating regional responses to the COVID-19 pandemic.

In a segment on his Fox Business program, Cavuto seemed mystified by the president’s claim of a mutiny.

“He’s the one that left it up to the governors to decide if they wanted to practice social distancing, shelter-at-home provisions, that each governor would decide,” Cavuto recalled. “He was never critical of Florida Gov. Ron DeSantis (R), among the later entrants in that policy.”

“All of the sudden it’s a bad ‘Mutiny on the Bounty,’ that I don’t get,” he said. “The Constitution allows them to do that.”

Fox Business correspondent Blake Berman agreed: “It is a big 180 from the president.”

“The Constitution lays this whole thing out,” Berman explained. “It’s a fairly conservative argument, time and time again. Yet, the president, conservative, the Republican in the White House is now sort of flipping the switch, doing the 180, saying that he believes he has — quote, unquote — total authority. It is a big shift and one that a lot of legal experts would say, the Constitution disagrees.”

Cavuto predicted a “legal nightmare” of lawsuits between the federal government and the states if the president continues to insist that he has total control.

The anchor went on to explain that Commerce Clause of the U.S. Constitution gives the Congress, not the president, the power over commerce between the states.

“Understand, then, has the control of the purse strings in this case, not the president of the United States,” the Fox Business host noted. “You cannot withhold aid to force an opinion on a state or any other jurisdiction.”

“It’s clearly kind of spelled out here,” Cavuto said of the Constitution. “It’s not to say that the president lacks a powerful bully pulpit, he indeed does. He can state and opinion in these briefings as he does.”

He added: “But it is not the law of the land, it is not in the Constitution. And it invites a sort of confusion on the part of people who want to know, you’ve granted us — the states — the power to do a lot of the things you said we should decide at our level and now you’ve come up with the decision that is counter to that. We are the ones ignoring policy and the Constitution? It’s crazy.”