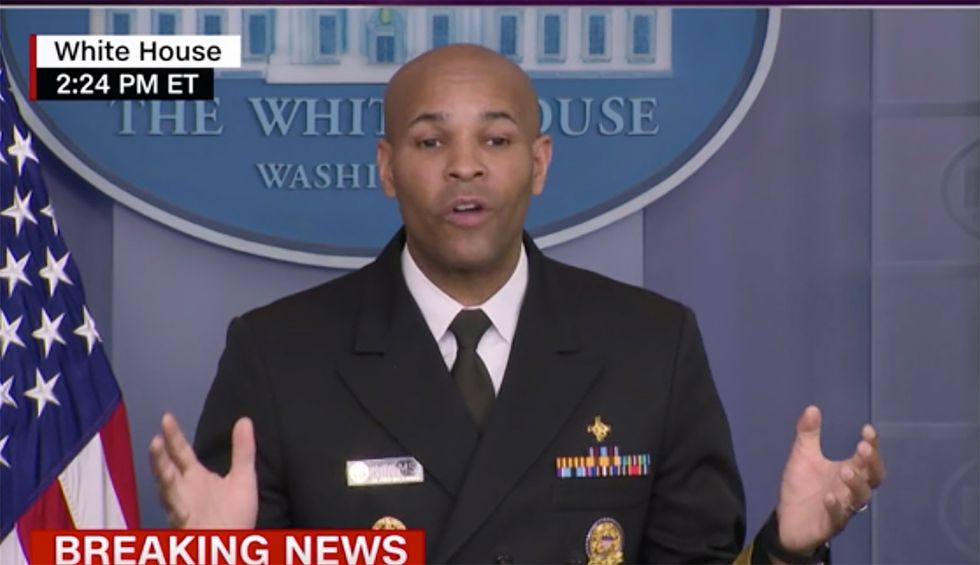 U.S. Surgeon General Jerome Adams attempted to tailor coronavirus prevention guidelines Friday for black and Hispanic communities, but he ended up doing little more than offending the people he was trying to reach. “We do not think people of color are biologically or genetically predisposed to get COVID-19,” Adams said, practically sounding a warning siren that he was about to say something demeaning. “There is nothing inherently wrong with you,” the doctor said, “but they are socially predisposed to coronavirus exposure and to have a higher incidence of the very diseases that put you at risk for severe complications of coronavirus.”

Adams went on to cite the disproportionate impact of the virus on people of color in his insulting plea for them to "avoid alcohol, tobacco, and drugs" and to follow expert recommendations to wear face masks, wash hands frequently, and adhere to socially distancing guidelines. "We need you to do this, if not for yourself, then for your abuela. Do it for your granddaddy. Do it for your big mama. Do it for your pop pop," Adams said. “We need you to understand especially in communities of color. We need you to step up and help stop the spread so that we can protect those who are most vulnerable.”

Surgeon General Jerome Adams is a clown. He said that Black and brown people need to “step up” and avoid alcohol a… https://t.co/7cbkBNV8RG
— Frederick Joseph (@Frederick Joseph) 1586551365.0

Yamiche Alcindor, the White House correspondent for PBS NewsHour, later asked Adams to explain his remarks Friday during a media briefing. "There are some people online that are already offended by that language and the idea that you're saying behaviors might be leading to these high death rates,” she said.

Adams said in response that he had been meeting with the NAACP, National Medical Association, and other organizations, and he determined that “we need targeted outreach to the African American community.” He said when he addressed the black and Hispanic community specifically, he used the language that is used in his family. “I have a Puerto Rican brother-in-law. I call my granddaddy, granddaddy. I have relatives that call their grandparents big mama,” Adams said. “So that was not meant to be offensive. That's the language that we use and that I use...”

As soon as the Centers for Disease Control and Prevention released data showing that black people infected with the coronavirus were disproportionately hospitalized because of the virus, I knew the ill-informed among us would point to that disparity as proof black people aren’t doing something right. I couldn’t, however, have predicted the ill-informed among us would be a black man serving as surgeon general for the country.

To say he should know better than to tie a pandemic to a racist stereotype of black people would be a gross understatement in and of itself, but Adams added insult to injury by feeling the need to dumb down his message as if black and Hispanic communities couldn’t possibly understand him unless he threw in “big mama” and “abuela.”

Author Frederick Joseph hit the nail on the head when he fittingly tweeted "Surgeon General Jerome Adams is a clown” who is only “further perpetuating false narratives about our communities.” “America will always try to blame people of color," Joseph added in the tweet.

Dr. Uché Blackstock tweeted: “Can someone tell @Surgeon_General Jerome Adams that structural racism is a key driver of social determinants of health, including housing, access to healthy food, education, access to healthcare and employment?”

And journalist Soledad O'Brien tweeted: “Can someone ask the US Surgeon General Jerome Adams if he has had the balls to tell the President ‘we need you to step up.’  That would be a worthwhile question to hear the answer to.”