'Pandemic Apprentice': Deprived of rallies to inflate his ego, Trump muscles in on sickness and death 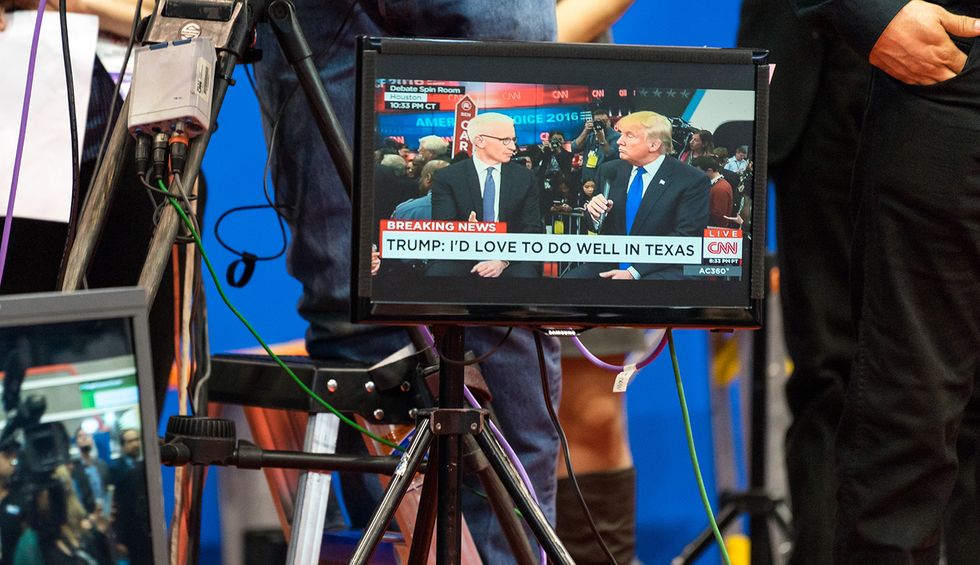 As we all know, Donald J. Trump sees the entire world as one big television show—about him. Everything is weighed against the success of his former NBC reality show “The Apprentice,” and frankly, as far as Trump’s concerned, the world just isn’t measuring up.

Nearly 2.5 million afflicted globally, and 170,000 deaths? Nearly 750,000 sick in the United States and more than 42,000 dead? Faulty lines of supply and insufficient testing? No, no, no. Ignore or deny them. This is not the scenario—or the numbers—Trump had in mind.

Avoiding the tragic truth, shifting blame and lying, he instead brags about the ratings for the daily press briefings of his coronavirus task force. He refuses to believe or understand that the Nielsen points are not so much for him as they are because viewers are desperate for information about the pandemic. They want to know what to do and when it will end and they want to hear from the top medical experts who too often are ridiculously forced to stand silently on the dais behind Trump as he bloviates for most of the sessions, each usually more than two hours long.

"All that he touches, dies. Tune in tomorrow, as thanks to him, America continues its fade to black."

During this crisis, those doctors could be doing better and more helpful things with their time and so could we. I’ve actually stopped watching in real time these campaign rallies posing as news conferences, and you should, too. There came a point a few weeks ago when they made me so outraged and angry, my head and stomach ached.  Healthier to see excerpts later on if you must and to read the Twitter recaps from CNN’s Daniel Dale than to have my head come to a point even sharper and more painful than it already is.

Dale believes Trump sees these daily exercises “as a vehicle for self-congratulation, self-defense, and deception.” And so they are, as Trump mangles the facts, wallows in self-praise, harangues the press and the nation’s governors, mocks those he sees as enemies and treats the White House like a sandbox where he’s Bully #1. And all the while, people die.

Remember that back in late 2017, The New York Times reported, “Before taking office, Mr. Trump told top aides to think of each presidential day as an episode in a television show in which he vanquishes rivals. People close to him estimate that Mr. Trump spends at least four hours a day, and sometimes as much as twice that, in front of a television, sometimes with the volume muted, marinating in the no-holds-barred wars of cable news and eager to fire back.”

For Trump, as the Times headlined in a separate 2017 story, “the reality show has never ended.”  And so, with nauseating regularity, Trump makes appointments to government jobs based not on expertise but on how he thinks someone will appear on TV. And he makes major decisions that ignore policy recommendations from experts but embrace the latest dumbass thing he heard on Fox News.

(Note, as John Oliver did Sunday on his HBO show “Last Week Tonight,” how both “the cure is worse than the disease” trope that has fueled the rush to reopen America despite the pandemic, and Trump’s embrace of the lupus medication hydroxychloroquine as a miracle cure came fresh off the Fox airwaves.)

“This has exceeded what would have been allowed on ‘The Apprentice,’” Laurie Ouellette, a University of Minnesota communications professor, told the Times. “It’s almost a magnification. It’s like reality TV unleashed. Yes, he was good at it, but I always felt like he had to be reined in in order not to mess up the formula. Here, he doesn’t have that same sort of constraint.”

She said that two-and-a-half years ago and it’s only gotten worse. Much worse.

An aside: In late 2018, in The New Yorker, Patrick Radden Keefe wrote that while “The Apprentice” was still in production, “Sometimes a candidate distinguished herself during the contest only to get fired, on a whim, by Trump.” Video editors “were often obliged to ‘reverse engineer’ the episode, scouring hundreds of hours of footage to emphasize the few moments when the exemplary candidate might have slipped up, in an attempt to assemble an artificial version of history in which Trump’s shoot-from-the-hip decision made sense.”

One of those editors, Jonathon Braun, said, “I find it strangely validating to hear that they’re doing the same thing in the White House.”

In fact, the Washington Post reported on April 11 that in Trump’s pushing America back into business as usual, “One senior administration official worried that some in the White House are trying to reverse-engineer their desired outcome. ‘They already know what they want to do and they’re looking for ways to do it,’ this person said, speaking on the condition of anonymity to share candid insights. ‘They think it’s time to reopen because some thought it was never time to close, and they’ve made that up in their minds.’”

You don’t think some of those same geniuses aren’t involved in stirring up the current spate of angry demonstrations in state capitals around the country? The ones demanding a reopening of bars and beauty salons, science and health be damned? Sure, there is genuine rage and distress—the economy’s shot and  22 million people are out of work—but the numbers of these defiant protesters are small compared to the majority of Americans—Republicans and Democrats—who believe we must not rush back to our lives as they were before. More will sicken and die.

Much of the demonstrators’ ire has been roiled and ginned up by the extreme right, including militias, anti-vaxxers, Proud Boys, Alex Jones and other conspiracy theorists, gun groups, GOP politicians and assorted Astroturf efforts masquerading as grassroots. That includes three brothers—Ben, Christopher and Aaron Dorr—described as pro-gun “provocateurs” who are behind a number of bogus Facebook groups encouraging  the protests. Together these groups have more than 200,000 members.

Reality TV isn’t real and a large amount of these protests aren’t real either. The guilty are leading the gullible.  On April 17, The Washington Post noted, “[T]he right-wing media has amplified the protests and conservative groups have formed plans to jointly press for a reopening of the economy. The groups include several veterans of the tea party era, activism that was powered by a network of right-wing and corporate financiers interested in reducing taxes and regulations on industry.” These include at least one group linked to the family of Trump’s Secretary of Education Betsy DeVos, funds tied to the Koch Brothers and the Castle Rock foundation, initially funded by the Coors brewing family.

Add to this toxic mix overmagnification by a media eager for pictures, the disinformation of Russian troll farms plus the president’s own tweets and public remarks. He told his addled base to “liberate” Democratic states and egged on the demonstrators – even though their protests  violate the very guidelines ordered by the White House under Trump’s name—social distancing, staying at home, avoiding gatherings of more than ten people, and on and on.

These ill-considered protests could trigger a second wave of illness and death that would make the economy even worse than it already is. ”Unless we get the virus under control, the real recovery economically is not going to happen,” Anthony Fauci said on “Good Morning America.” “So what you do if you jump the gun and go into a situation where you have a big spike, you’re going to set yourself back.” And by the way, demonstrators, although the symptoms vary, if you know anyone who has been slammed by it, the virus is devastating, painful and debilitating beyond expectation. It could happen to you.

COVID-19 is Trump’s 9/11. And his Katrina. And his Charlottesville. Again. Because he has repeated the same thoughtless recklessness he displayed in 2017 in the wake of those racially charged and deadly demonstrations in Virginia. The “bigotry and violence,” he said, “was on many sides” as neo-Nazis attacked. There were “very fine people on both sides,” he declared as bigots marched and shouted, “Jews will not replace us!”

This year’s version—as Trump watches the marchers recreate TV’s “The Walking Dead” —“I’ve seen the people, I’ve seen the interviews of people. These are great people,” he said. “Look they want to get ― they call cabin fever, you’ve heard the term ― they’ve got cabin fever… “I think these people are ― I’ve never seen so many American flags.” But there were Nazi and Confederate flags, too, although Trump says he didn’t see them, and the tea party’s “Don’t Tread on Me.” And guns, although so far, the rallies have remained peaceful.

We’ve all been watching a lot of television during these housebound days—more than usual even for Teevee Trump, who is said to seethe as he views those like New York Governor Andrew Cuomo he believes unfairly are getting more favorable coverage than he.

One thing I just watched for the umpteenth time: The classic “Network,” written by the amazing Paddy Chayefsky.  First released in 1976, it was on Turner Classic Movies the other night and remains stunningly prescient about what television would become.

Toward the end, I was struck by a speech William Holden’s character makes to Faye Dunaway, who plays a conniving and heartless TV executive. Holden – and Chayefsky – could have been talking about you-know-who.

“You are television incarnate,” Holden says, “… indifferent to suffering, insensitive to joy. All of life is reduced to the common rubble of banality. War, murder, death are all the same to you as bottles of beer. The daily business of life is a corrupt comedy.  You even shatter the sensations of time and space into split-seconds and instant replays. You are madness… virulent madness, and everything you touch dies with you.”

We have descended into chaos because there is madness and incoherence at the top. This president makes an endless series of contradictory declarations because if you believe in nothing, you’ll say anything.  If there is such a thing as a victory in this pandemic, it will have been achieved by the kindness and intelligence of most of our people, not the so-called commander-in-chief.

All that he touches, dies. Tune in tomorrow, as thanks to him, America continues its fade to black. Please don't let him succeed.