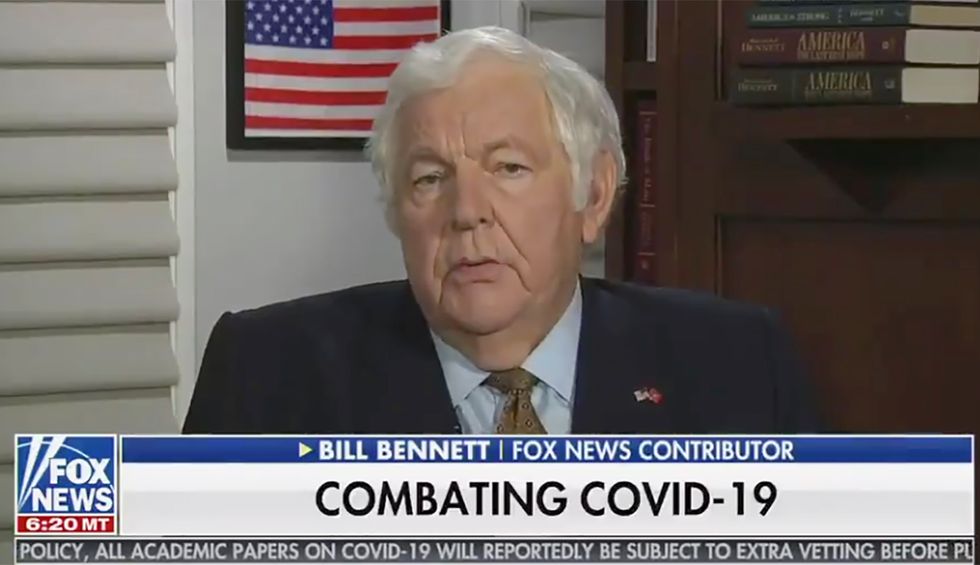 A longtime Fox News contributor is falsely comparing the coronavirus pandemic to the seasonal flu, suggesting stay at home policies and temporary shuttering of the economy were unnecessary, and insisting the pandemic is “not a pandemic.”

Former Reagan Secretary of Education Bill Bennett told “Fox and Friends” co-host Brian Kilmeade “we’re going to have fewer fatalities from this than from the flu,” noting “61,000 is what we lost to the flu in 2017 and 2018.”

He pointed to estimates from the University of Washington which currently project the coronavirus pandemic will kill 61,545 in the U.S. through August 4. Bennett is not offering a valid comparison as the pandemic does not end on that date.

But he does inadvertently prove the very tactics he wants to rescind – social distancing and shutting down the economy – are working. And then falsely says, “if you look at those numbers, and see the comparable, we’re going to have fewer fatalities from this than from the flu.”

Bennett then offers up an astonishing, angry lament over the necessary actions taken.

“For this, we scared the hell out of the American people, we lost 17 million jobs, we put a major dent in the economy, we closed down the schools — you heard Dr. Oz say we probably didn’t have to do that — shut down the churches, and so on.”

Dr. Oz, accused of being a promoter of “pseudoscience,” is not an immunologist, public health expert, or infectious diseases expert.

“You know, this was not, and is not a pandemic,” Bennett said, falsely. “But we do have panic and pandemonium as a result of the hype of this. And it’s really unfortunate. Look at the facts.”

Bennett has a curious relationship with facts.

In 2005 Bennett defended his racist remarks about abortion as a “thought experiment,” ABC News reported at the time.

ABC News’ report on Bennett’s remarks at the time called called him a “self-styled ‘Values Czar.'”