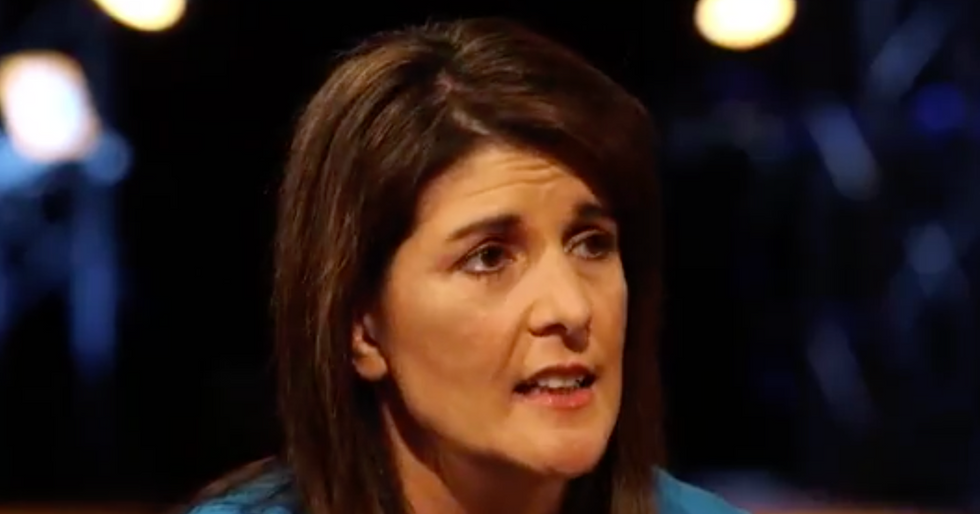 When Mitch McConnell appeared on far-right pundit Hugh Hewitt’s radio show on Wednesday, the Senate majority leader asserted that he didn’t want to see the federal government “bail out” blue states — stressing, “I would certainly be in favor of allowing states to use the bankruptcy route.” And when former South Carolina Gov. Nikki Haley agreed with that assertion, she was slammed for it on Twitter.

On Thursday, Haley tweeted, “States should always plan for a rainy day just like any business. I disagree that states should take Fed money or be bailed out. This will lead to taxpayers paying for mismanagement of poorly run states. States need to tighten up, make some cuts, and manage.”

States should always plan for a rainy day just like any business. I disagree that states should take Fed money or b… https://t.co/sPvSem99Bm
— Nikki Haley (@Nikki Haley) 1587650954.0

Haley posted that tweet during a pandemic that has not only killed more than 47,000 people in the U.S. — according to John Hopkins University — but also is sending the number of unemployment applications sky high. And Twitter users weren’t shy about reminding Haley how inconsistent she is when it comes to funding for states.

@NikkiHaley This is why no Republican should ever be put in charge anything ever again. Governments are not “busin… https://t.co/uC5tTkoXYo
— rzrwiresunrise (@rzrwiresunrise) 1587653422.0

Twitter user Ben Yelin, @byelin, tweeted, “Big businesses got bailed out and individuals got free money with no strings attached, whether they were spending it on white collar crimes or drugs. But sure, firefighters and police officers and transportation workers should have to suffer. You’re a ghoul.”

Similarly, Brooklyn resident Michael Tae Sweeney, @MTSW, told Haley, “You already bailed out Wall Street, why not leave the teachers and firefighters twisting in the wind?

@DanRiffle posted, “So do you disagree with giving money to businesses right now, as the President and Senate are doing? Should they have saved for this rainy day?” And @HoarseWisperer reminded Haley, “When your state had some rainy days, you ran to the federal government for money” —  posting a CBS News article that, in 2015, discussed Haley’s response to a flooding threat in South Carolina.

@TomT91004188 used some biting sarcasm in his post, telling Haley, “Preach Nikki, this taxpayer here would only like to pay for the mismanagement of poorly run corporations that will spend their money on executive bonuses. Those paramedics, firefighters, and state services have had it too easy!”

Another Twitter user, “@DougBernstein,” reminded Haley that red states also receive money from the federal government: “South Carolina receives $7.87 back from Washington for every $1 its citizens pay in federal tax,” @DougBernstein noted. And similarly, law professor Darren Hutchinson, @dissentingj, wrote, “So, this is why South Carolina received ZERO money from the federal government when you were governor? Oh, snap! Google tells everything. When you were governor, the state had the HIGHEST rate of federal funding of ALL states!”

@NikkiHaley you failed to plan for a literal rainy day and were happy to take the federal government’s money: https://t.co/Z00mSkEa2D
— Molly Knight (@Molly Knight) 1587653538.0