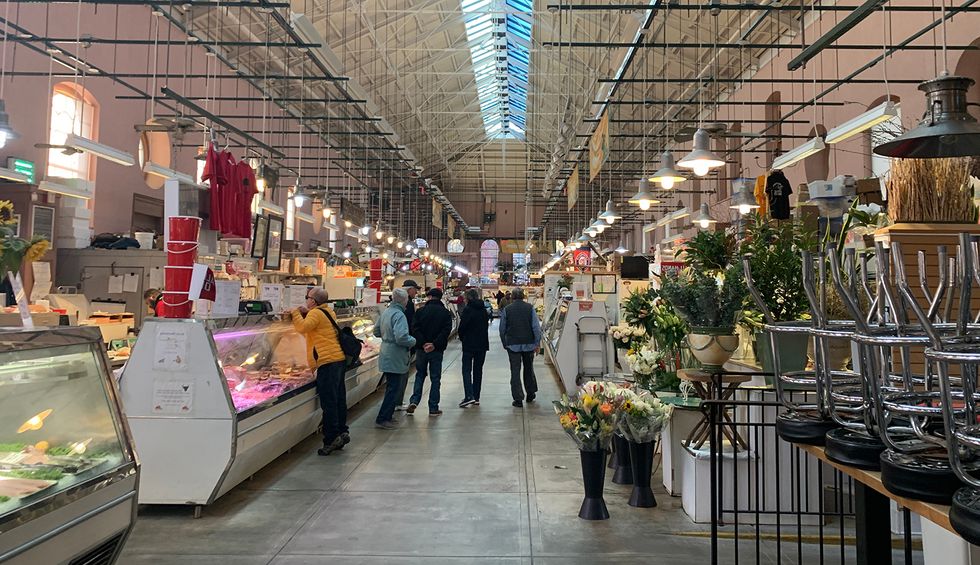 One of the nation's largest pork processing facilities is shutting down indefinitely after over 230 employees tested positive for COVID-19, bolstering concerns about food supply chain problems that have left farmers, food banks, grocery stores, and agricultural and food service workers scrambling to keep crops harvested, shelves stocked, and people fed during the coronavirus pandemic.

The Sioux Falls, South Dakota facility accounts for up to 5% of U.S. pork production and employs about 3,700 people—who will receive at least two weeks pay during the shutdown—according to Smithfield Foods.

The company's president and CEO Kenneth Sullivan announced the closure in a statement Sunday:

The closure of this facility, combined with a growing list of other protein plants that have shuttered across our industry, is pushing our country perilously close to the edge in terms of our meat supply. It is impossible to keep our grocery stores stocked if our plants are not running. These facility closures will also have severe, perhaps disastrous, repercussions for many in the supply chain, first and foremost our nation's livestock farmers. These farmers have nowhere to send their animals.

Unfortunately, COVID-19 cases are now ubiquitous across our country. The virus is afflicting communities everywhere. The agriculture and food sectors have not been immune. Numerous plants across the country have COVID-19 positive employees. We have continued to run our facilities for one reason: to sustain our nation’s food supply during this pandemic. We believe it is our obligation to help feed the country, now more than ever. We have a stark choice as a nation: we are either going to produce food or not, even in the face of COVID-19.

Smithfield, as Sullivan noted, is not alone in temporarily shuttering a meat processing facility in response to suspected or confirmed COVID-19 cases among employees. As CNN reported, Tyson Foods suspended operations at a pork plant in Columbus Junction, Iowa and JBS USA plans to reopen a beef plant in Souderton, Pennsylvania on April 16 after a two-week shutdown.

Journalist Glenn Greenwald tweeted Monday that "animal agriculture and factory farms are utterly unsustainable as a means of feeding humans." The Intercept co-founder, who is vegan and has reported on animal rights and the agriculture industry, also highlighted growing alarm about antibiotic-resistant bacteria and zoonotic viruses like the novel coronavirus.

From a public health & environmental perspective (to say nothing of the ethical atrocities), animal agriculture and… https://t.co/VnPPsM4iSh
— Glenn Greenwald (@Glenn Greenwald) 1586781533.0

Bloomberg reported Sunday on how the meat industry-employee infections and plant closures across the United States have exposed both supply chain and worker safety concerns:

The shuttered plants and sick workers are adding to other disruptions caused by the virus that's making it harder for food to get from farm to table. Trucking bottlenecks and snarled port traffic have also contributed to why shoppers are seeing empty shelves.

The surge in cases has also raised concerns over worker safety. Deaths have been reported for employees at meat facilities owned by JBS SA and Tyson Foods Inc. Laborers have, in some cases, staged walk-outs to protest working conditions. In meat plants, stations on processing lines can be close together, creating challenges for social distancing. Workers also share break and locker rooms.

Local and state stay-at-home orders related to the pandemic have generally barred dine-in services but allowed restaurants to continue offering takeout and delivery services. However, some eateries have opted to close down entirely due to the crisis.

"The closing of restaurants, hotels, and schools has left some farmers with no buyers for more than half their crops," the New York Times reported Saturday. "And even as retailers see spikes in food sales to Americans who are now eating nearly every meal at home, the increases are not enough to absorb all of the perishable food that was planted weeks ago and intended for schools and businesses."

Outbreak-related disruptions to the U.S. food supply chain have forced farmers and food processors to dump fresh milk, smash unhatched eggs, and turn unharvested crops back into the ground—conditions that Paul Allen, who has had to destroy millions of pounds of beans and cabbage at his farms in South Florida and Georgia, called "heartbreaking."

Many farmers say they have donated part of the surplus to food banks and Meals on Wheels programs, which have been overwhelmed with demand. But there is only so much perishable food that charities with limited numbers of refrigerators and volunteers can absorb.

And the costs of harvesting, processing, and then transporting produce and milk to food banks or other areas of need would put further financial strain on farms that have seen half their paying customers disappear.

Brian Greene, CEO of Houston Food Bank, told the Guardian last week that although "everything under the sun produce-wise is showing up" at his and other food banks—which are seeing increased demand as people across the country lose their jobs—much of that fresh food is expected to go to waste while both food banks and grocery stores struggle to stock shelf-stable goods.

"The reality is what makes the food chain work normally is there are just tens of thousands of arrangements that have been developed over time in order to match supply and demand. Then you just suddenly break all that and you're trying to, with voluntary relationships, piece something together in a very short timeframe," Greene said. "There's going to be a lot of failure."

Professor Marion Nestle offers a sobering assessment: "That the food system is failing is a given." https://t.co/HtEniirMVF
— HuffPost Politics (@HuffPost Politics) 1586777638.0

In terms of supply, the Guardian noted that "efforts to keep farmworkers safe and socially distanced in the fields mean even slower harvesting," highlighting a March report on how "America's farmworkers have always done the essential work of feeding the nation for little reward and with few codified protections or benefits." These labor conditions have drawn greater scrutiny during the pandemic, as the same people who are working to harvest crops struggle to put food on their own tables.

Rather than working to improve conditions for farmworkers, the Trump administration has ramped up attacks on this already marginalized group. As Common Dreams reported Saturday, White House Chief of Staff Mark Meadows and Perdue are leading an effort to cut the wages of foreign guest workers on U.S. farms to provide financial relief to the nation's agricultural industry.

That effort came after President Donald Trump last month limited seasonal workers from Mexico during the outbreak, provoking warnings about labor and food shortages. Truthout reported Saturday that the while the administration is also turning away asylum-seekers at the border, "officials say the administration may expand the recruitment of temporary agricultural workers" to keep the food supply moving.

"None of this is really about COVID-19, of course. The White House is just continuing and intensifying policies it has pushed for three years," Truthout continued. "The pandemic and Trump's response to it have gone a long way to expose the underlying injustices of U.S. society, including those in the immigration system. The crisis has created an opportunity, and a responsibility, to push harder than ever for fundamental immigration reform."