'Magical thinking': Trump baselessly claims COVID-19 will disappear even without vaccine as US cases top 1 million 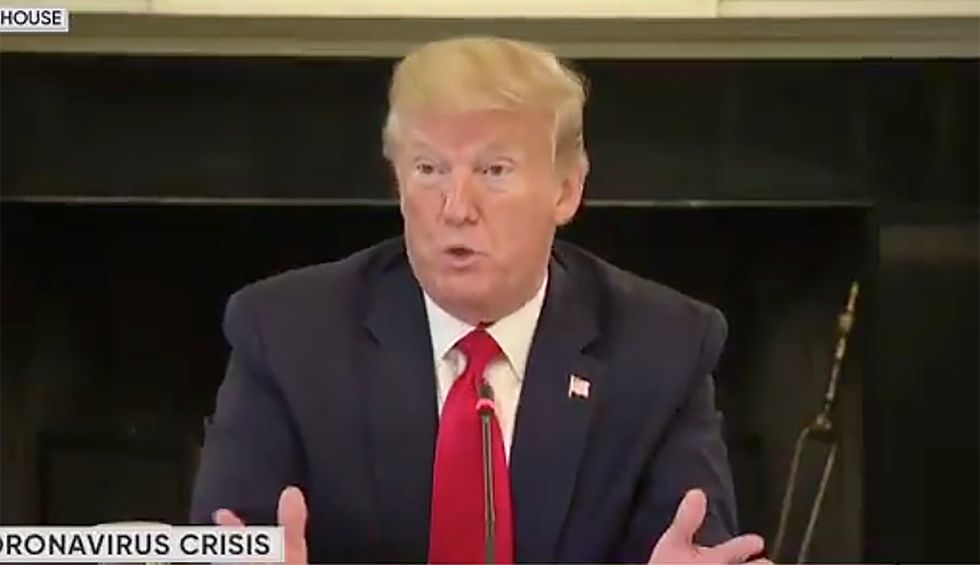 Having apparently learned nothing about the novel coronavirus since February—when he predicted the contagion would disappear "like a miracle" by April—President Donald Trump insisted during a roundtable with corporate executives Wednesday that Covid-19 will soon "be gone" even in the absence of a vaccine, a view that is not shared by public health professionals.

"It's gonna go, it's gonna leave, it's gonna be gone, it's gonna be eradicated," Trump said when asked to explain how the virus will simply disappear without a vaccine. "It might take longer, it might be in smaller sections. It won't be what we had."

"If you have a flare-up in a certain area, if you have a, I call them burning embers, boom. We put it out," Trump continued. "We know how to put it out now. But we put it out."

In response to Trump's remarks, Rep. Ted Lieu (D-Calif.) tweeted that the president's "magical thinking and downplaying of the virus has led to over 61,000 American deaths."

"Saying the virus is gonna leave doesn't make it go away," Lieu said. "But more testing and [personal protective equipment] would help stop its spread."

The president's latest prediction came after coronavirus cases in the U.S. officially topped one million and deaths surpassed 60,000. Despite the mounting death toll, lack of nationwide testing capacity, and fears of a devastating second wave, states across the nation are slowly reopening sectors of their economy as the federal government races to develop a Covid-19 vaccine.

Bloomberg reported Wednesday that the Trump administration "is organizing a Manhattan Project-style effort to drastically cut the time needed to develop a coronavirus vaccine, with a goal of making enough doses for most Americans by year's end."

"Called 'Operation Warp Speed,' the program will pull together private pharmaceutical companies, government agencies, and the military to try to cut the development time for a vaccine by as much as eight months," according to Bloomberg. "As part of the arrangement, taxpayers will shoulder much of the financial risk that vaccine candidates may fail, instead of drug companies."

In contrast to Trump's insistence that the virus will soon "be gone," Dr. Anthony Fauci—the nation's leading infectious disease expert—warned in an interview on CNN Wednesday that a second wave of the coronavirus in the coming months is "inevitable."

"If by that time we have put into place all of the countermeasures that you need to address this, we should do reasonably well," Fauci said. "If we don't do that successfully, we could be in for a bad fall and a bad winter."