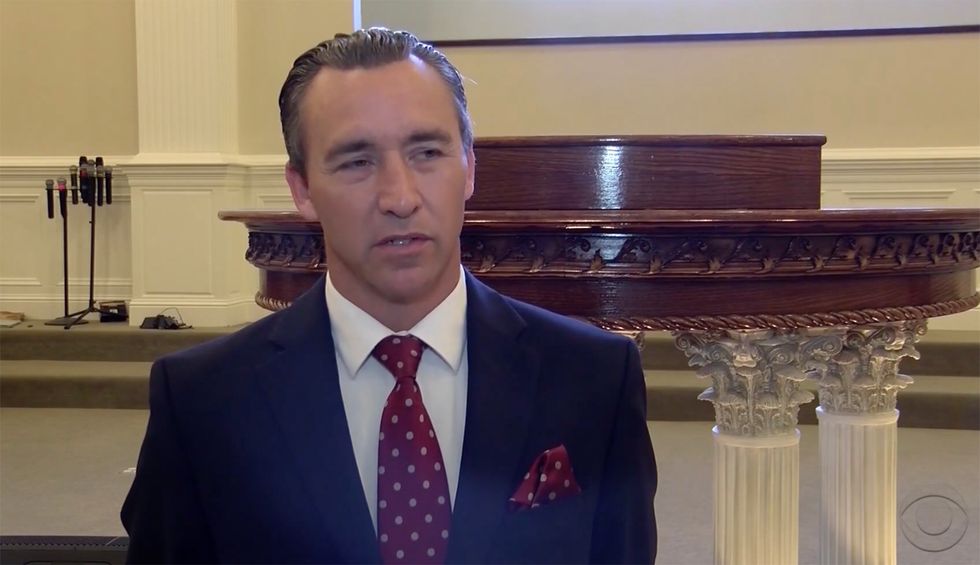 Tony Spell, the pastor of Life Tabernacle Church outside of Baton Rouge, Louisiana, has already been charged for violating Gov. John Bel Edwards’ stay-at-home orders by holding packed church services amid the ongoing novel coronavirus pandemic. He was recently arrested on improper backing and aggravated assault charges for allegedly reversing a church van in the direction of a protester; after turning himself in, he was quickly released to a crowd of parishioners in the parking lot of the local police station. Unsurprisingly, he held a service that very same evening.

Most recently he defied orders yet again by holding large services while placed under house arrest, as reported by local outlet The Advocate. At the church’s most recent Sunday service, Spell reportedly wore an ankle bracelet. The pastor declared: “I’m not hiding anymore.”

As reported by NBC News, Spell had to wear the ankle bracelet because he would not agree to actually practice social distancing, according to his attorney, Joseph Long. In a statement to the news outlet, Long stressed that Spell lived within 50 yards of the church.

Local outlet WAFB-TV reported that when a judge asked Spell if he’d comply with orders and limit the number of people who can gather at once, Spell quoted a Bible verse. When asked by the judge a second time, he reportedly went silent, which the judge took as a communication that Spell would not comply.

Spell has been charged with six misdemeanor counts of violating the governor’s coronavirus orders. And it’s no meager discrepancy in number, either; the order bans crowds of more than 10 people. At one service, as reported by Reuters, for example, 1,200 people attended. The church also has a history of having buses sent out for people to more easily attend services. While outreach outside of a pandemic is one thing, during a pandemic it’s something else entirely. In the past, Spell has argued that his church is cleaned on a daily basis and that attendees stay six feet apart. As The Daily Beast pointed out, however, most people did not wear masks to the recent service. You can see the same in the Facebook live stream from Sunday.

As reported by The Advocate, Spell was released with conditions. He must “refrain from any and all criminal conduct,” which includes but is not limited to “strictly abiding by all emergency orders issued by the Governor of the State of Louisiana,” according to the publication.

One parishioner has reportedly died from COVID-19, though it’s not confirmed where he contracted the virus. Spell has denied the death was related to COVID-19 and suggested it was the result of another medical condition.

What’s the easiest solution for people of faith amid a pandemic? In today’s world of technology, a live stream will generally do just fine. Even the Pope is doing it.