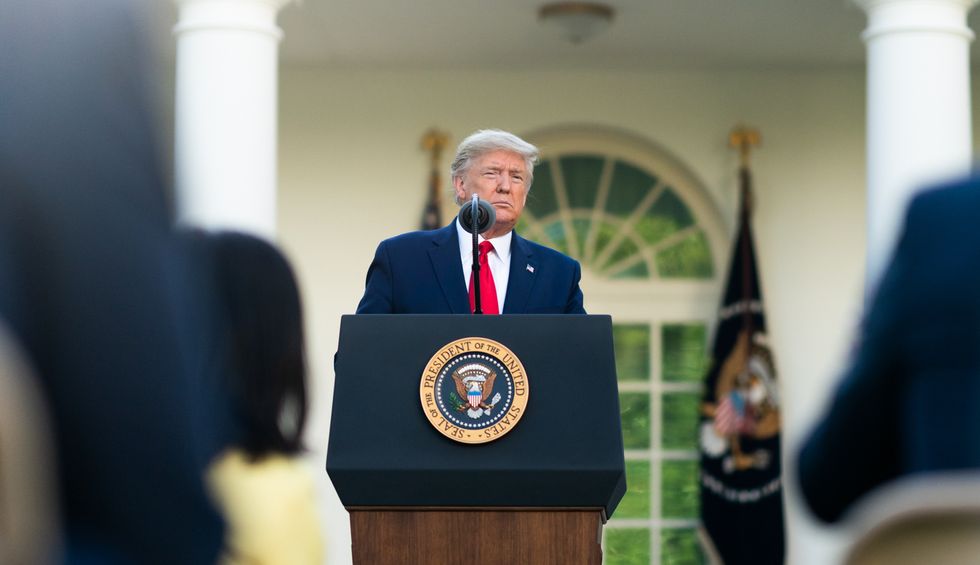 This article was paid for by Raw Story subscribers. Not a subscriber? Try us and go ad-free for $1. Prefer to give a one-time tip? Click here

A pair of Donald Trump tweets Monday show beyond all doubt that he has no idea what’s in our Constitution and fashions himself a Sun King on the make, a wannabe dictator.

Trump asserted, wrongly, last July that thanks to our Constitution  “I have an Article II, where I have to the right to do whatever I want as president.”

He has said that again and again as this video compilation shows.

Of course, Article II of our Constitution strictly limits what any president can do, basically requiring limiting him to carrying out the will of Congress, the Article I branch of our government. But Trump doesn’t understand that, or he doesn’t care.

That ignorance was on full display late Monday morning when Trump tweeted this:

Now Trump, to be fair, does have some authority to close and open facilities, but his role is very restricted. He can shut down national parks, for example. He could close the Vietnam Veterans Memorial, which would be understandable considering the way he slithered out of the draft by claiming bone spurs he says he no longer recalls.

Trump didn’t shut any of those down. Trump has zero authority to declare them open for business as usual. Governors, and in some cases mayors, hold those powers under outer constitutional system.

How about ordering people to stay at least six feet apart? Notice that the five o’clock follies at the Trump White House, a substitute for his campaign rallies, are always about “recommendations.” That’s because our Constitution does not empower Trump to force —  and, should you disobey him – to enforce physical distancing except on federal property.

The people who should be screaming from the rooftops about Trump’s claims of unlimited power and trampling on the powers of the states are the federalists, as in the rightwing Federalist Society. That’s the prominent pseudo-guardian of our liberties that influences, if not outright picks, Trump’s federal court and federal agency board nominees.

When Obama was president, the 70,000-member Federalist Society was oh so worried about Obama creating an “imperial presidency,” that it held conferences to inform members and alert the public to imagined presidential power plays.

So, what has the society said about Trump’s actual claims of unlimited power during the pandemic? Not even a passing mention at its website to Trumpian assertions of unlimited constitutional powers.

Board co-chair Steven G. Calabresi, a Northwestern University law professor, is not just silent on Trump as imperialistic president, he has been promoting cockamamie theories supporting Trump. The other co-chair, Leonard A. Leo, stays silent. Ditto Eugene B. Meyer, the society president and CEO.

What’s scary about Trump’s assertions of power is not that he lacks such power. It’s that Trump has no idea that he lacks it, and his Republican Party enablers cover their ears and look the other way.