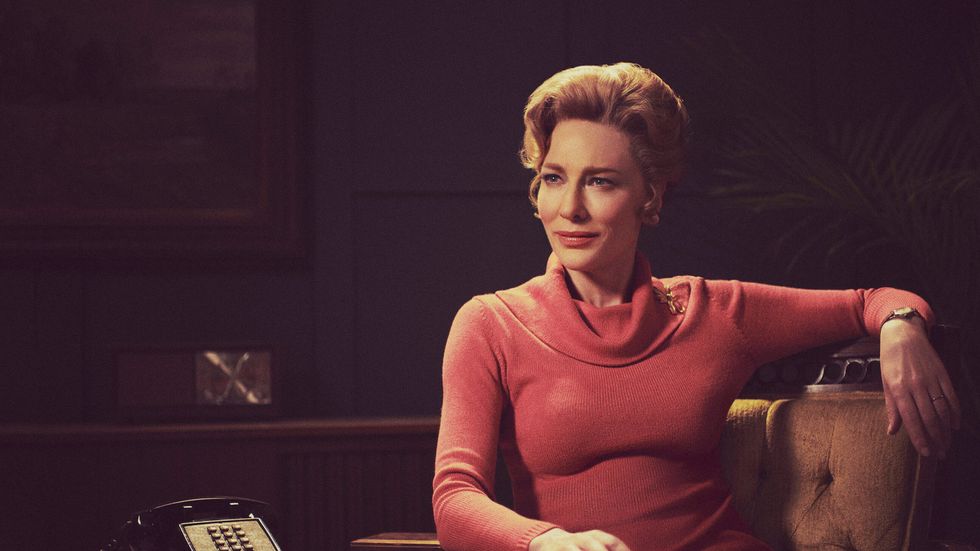 This was supposed to be the Year of the Woman . . .  again. Not only is 2020 the election year much of the world has been pining for since November 2016, it also marks the 100th anniversary of the 19th amendment's passage, which guaranteed all Americans the right to vote.

Of course, some women had much more difficulty exercising that right than others, but still – 2020! Year of the Woman! Same as 2012 and 1992! Hillary Clinton isn't around to show us the way this time, but we did get "Hillary" on Hulu followed closely by the decidedly feminist "Home Before Dark" on Apple TV+. PBS' "Great Performances" has "Ann," a one-woman show about fiery Texas governor Ann Richards written and performed by Holland Taylor, coming our way on June 19. A week later debuts "Gloria – A Life," which has Christine Lahti playing Gloria Steinem.

Steinem also plays a central role in "Mrs. America," creator and showrunner Dahvi Waller's freshly premiered limited series.  Only here she's played by Rose Byrne, one big name in a bedazzled ensemble of people famous enough to could splash up any marquee. That doesn't just refer to the actors.

No such squad attains legendary status without a commensurate villain to battle. And both history and "Mrs. America" deliver their adversary in the form of Phyllis Schlafly, played to frigid perfection by a crisply pressed and impeccably tailored Cate Blanchett. With such a cast working out the struggle to ratify the Equal Rights Amendment and illustrating the role women played in both fighting the rise of right-wing religious conservatives and, for Schlafly's part, buckling it in for the long ride, "Mrs. America" is a giant-karat TV project designed to ride the swell of one of the biggest political and social movements.

Instead, it debuts as an FX on Hulu project at a time when our regularly scheduled Year of the Woman cultural programming has been pre-empted by a global pandemic. The majority, "silent" and otherwise, is tuned into an existential threat colored by a combination of fear and boredom. Even a star-studded examination of history may be a tough sell under such circumstances.

On the other hand, debuting the first three episodes of "Mrs. America" on Hulu could work in its favor at a time when so many are searching for the next great TV binge. Its relevance can hardly be denied. Nor can Blanchett's comportment and her mastery of the sort of sharp, society-polite expressiveness that either sends chills down a person's spine or makes a feminist want to sign up for kickboxing classes.

Schlafly and Blanchett, who is an executive producer of "Mrs. America," serve as the story's natural foreground. The conservative firebrand rose to national prominence in the 1970s as a spokesperson for the so-called "silent majority" and champion of the "traditional values" that feminism supposedly threatened. The actor, as many moviegoers know so well, is an expert in conveying warmth and malice in the same flinty smile.

And much as we may wish humankind followed some version of gentle kindness and wisdom espoused by the likes of, say, Tolkien's prettiest high elf, we're living under a political patriarchy enabled and in part wrought by the work of Schlafly.

Despite how easy it is for a progressive woman to despise Schlafly and the misleading tactics she employed to bolster her Stop ERA conservative movement, Blanchett accentuates her humanity, as does Waller, who scripts both the series opener "Phyllis" and its second episode, "Gloria."

Never does Blanchett contort her portrayal of Schlafly to make her into someone the public doesn't perceive her to be. Instead "Mrs. America" smartly fleshes out the aggravating irony of her public image. Blanchett underscores Schlafly's intellect and public relations savvy, but also captures her moments where she sublimates her true feelings at being relegated to the sidelines in conversations about national security, in which she specialized and hoped to parlay into a government position.

Instead, "Mrs. America" depicts how, time and again, she's relegated to a supporting role to men with political and professional ambition, particularly her husband Fred (John Slattery) – and how she willingly accepts that position in order to be the public face of the anti-feminist "Stop ERA" movement, a movement built on the success of her self-produced newsletter, the "Phyllis Schlafly Report."

The "STOP" in her movement's slogan was an acronym that stood for "Stop Taking Our Privileges," the right to be homemakers and be supported by their husbands, the right to be free from fear of being swept up in a military draft, none of which were under threat in the amendment's doctrine.

When we meet her in 1972, Schlafly's already made several unsuccessful runs for office, but is still received by United States congressmen. Schlafly sits in on meetings to discuss policy proposals, but is treated like a secretary even though she's obviously the brains in the room. Blanchett adeptly realizes these motes of internal struggle throughout the series, which makes the moments when she drops her façade and voices her aggravation at having to dim her abilities pay off splendidly.

None of this necessarily makes a person who despises Schlafly more sympathetic to her; she still actively worked against the struggle to attain gender parity in the workplace and reproductive rights. It's a safe bet that Blanchett's vivid, thoughtful performance won't make Schlafly's boosters more inclined to enjoy "Mrs. America," either.

Either way, it's worth pointing out that series doesn't expressly paint the mainstream arm of the feminist movement as pure heroes, either. The first these episodes of "Mrs. America" ably depict the spectrum along which the series operates, starting with Schlafly's determined organizing and bullying of Midwestern housewives and the cool dominance she wields over them.

The female tragedy in the Schlafly household is represented by Fred's spinster sister Eleanor (Jeanne Tripplehorn), who is swept along for the ride and serves as a sponge for Schlafly's condescension. Tripplehorn and Paulson aren't necessarily underused here, but it's odd to see these leads overshadowed, intentionally, by Blanchett's high-wattage performance of a woman who existed to dominate everyone in the room. (The flipside of this is Melanie Lynskey's mildly comedic interpretation of real-life figure Rosemary Thomson, who rises in the Illinois conservative scene on the tailwind  created by Schlafly and, in the series, comes across as a tad dimwitted.)

That's appropriate, I suppose. Blanchett, Byrne, and Aduba – the stars of the first three episodes, respectively – personify the three reasons "Mrs. America" is well worth watching. Byrne probably has the easiest role to play and one of the tougher challenges of the ensemble, in that Steinem still makes public appearances and may be the most familiar figure in this story, along with Schlafly.

Byrne plays up Steinem's flat manner of speaking, and her level, confident gaze throughout each scene very consciously. It's a good performance, and yet one that at times feels like she's wearing it as opposed to embodying it.

Aduba, meanwhile, captures the force and blaze of Shirley Chisholm without too closely marrying her portrayal to the congresswoman's distinct speech patterns or her look. And it works. Chisholm, who became the first Black woman to run for president in 1972, was acutely aware of the part her appearance, how she spoke, and her passion played in every aspect of her political image.

Aduba dives underneath that shield to make her frustration the foreground, and in an episode written by Tanya Barfield we see, spelled out bright and plainly as a spring day, white feminism's role in placating and propping up the misogynist political status quo. This was as true in 1972 as it is in 2020, leading to more than a few fearful comparisons between the two elections.

Those aren't the only similarities the themes of "Mrs. America" share with the modern era. Abortion rights play prominently in these opening episodes, particularly by way of Steinem's origin story. Perhaps that installment can remind people of the fact that that pandemic's news cycle dominance is pushing the current struggle for women's rights to the back burner, and being exploited in Texas, Maryland, and Ohio to block women from getting abortions by painting the procedure as "nonessential."

Or maybe that's expecting too much in an era that's as much defined by its collective historic amnesia, if not more so. In that regard, one might hope that seeing Elizabeth Banks playing Jill Ruckelshaus, a progressive Republican who advocated for women's rights under Gerald Ford, could lead to bit of research into who Ruckelshaus is and – gasp – the fact that she managed to be a Republican who supported women's equality.

Niecy Nash flits in the background in a similar fashion to Banks while also announcing the significance of  Black Feminist Organization co-founder Flo Kennedy, the proverbial bridge between Gloria Steinem's arm of the movement Shirley Chisholm. Ari Graynor receives more prominent camera time as Steinem's Ms. Magazine co-founder Brenda Feigen-Fasteau, largely thanks to a episode constructed around her TV with her husband Marc (Adam Brody) to debate Phyllis and Fred Schlafly.

And Brody, like Slattery and James Marsden, Jay Ellis and a parade of other familiar actors, make as much of their limited screentime as one is able in an expansive ensemble dominated by historic names.

Ullman's dead-on depiction of Friedan is not a surprise given her prowess with impressions, but she's also incredible at digging into the anger that drove Friedan and ultimately led the feminist movement to push her to the fringes. Martindale captures the pragmatic fatigue that surely beset Abzug , a three-term congresswoman familiar with the workings of political machinery and bleakly realistic about the movement's chances to enact real shifts in government and society.

Nevertheless, alongside its defining qualities of crash and struggle is the sense of optimism in "Mrs. America." You can see it in the waning moments of "Shirley," after Chisholm has been abandoned by the sexist, male-dominated Black Congressional Caucus and her white feminist allies.

At that year's Democratic convention, shown in the series, the excitement for Chisholm even then is tangible and audible, and makes a person wonder what could have been. Such a bittersweet taste will be familiar to a lot of progressives right now, and shows how little has society's views of women in power, particularly women of color, have transformed after all this time.

But "Mrs. America" also is a reminder that such passion persists even now, and in these darkest of days change may yet be possible.

The first three episodes of "Mrs. America" are currently streaming on FX on Hulu, with new episodes debuting on Wednesdays.