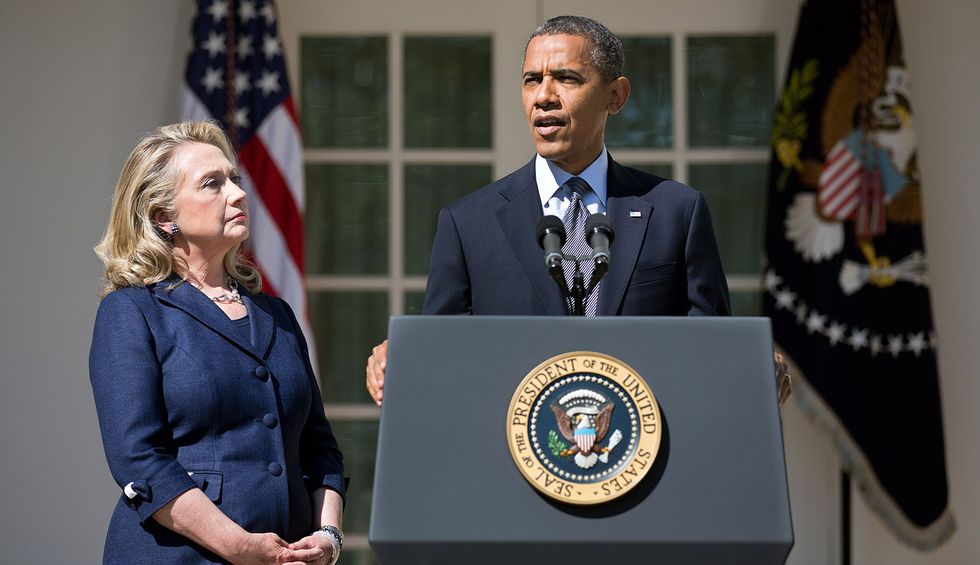 President Barack Obama, with Secretary of State Hillary Rodham Clinton, delivers a statement in the Rose Garden of the White House, Sept. 12, 2012, regarding the attack on the U.S. consulate in Benghazi, Libya. (Official White House Photo by Lawrence Jackson)
Travis Gettys
and
Raw Story
April 01, 2020

Former senator Claire McCaskill called out Republican lawmakers for caring more about four deaths at Benghazi than thousands of deaths already from the coronavirus.

The MSNBC contributor told “Morning Joe” that President Donald Trump’s inaction in the early stages of the outbreak had cost potentially hundreds of thousands of lives, and was currently endangering hundreds of sailors’ lives on the USS Theodore Roosevelt.

“Delay is deadly,” she said, “and this president was in charge and was part of a government that delayed a response, particularly as it related to testing, and as a result, we are going to see thousands and thousands of more people die.”

“Look at preventible death, and you look at the crisis this has caused,” McCaskill continued. “Think of all the energy that was expended on Benghazi, and all the accusations that were made that, well, it was preventible and there should have been people in the State Department should have known there was a security breach. We have got a ship full of our active military calling and saying, ‘Please help us, we have over 200 people infected on this ship with active military in uniform serving our country in theater over across the ocean and this commander in chief knows it, and if we do not take steps to immediately help those people on that ship, what does that say about his ability to lead this country?”

McCaskill said the president loves to show power, but seems afraid to actually use it.

“Let me just say [this] about Florida and these governors,” she said. “You know, this president loves power. You know what he can do today? These governors are afraid of him and they’re afraid to lead. All he has to do in his weekly, his daily show, is to say, I’m pleading with all the governors to enter statewide orders to stop schools, to shut down down nonessential businesses. That’s all the president has to do.”