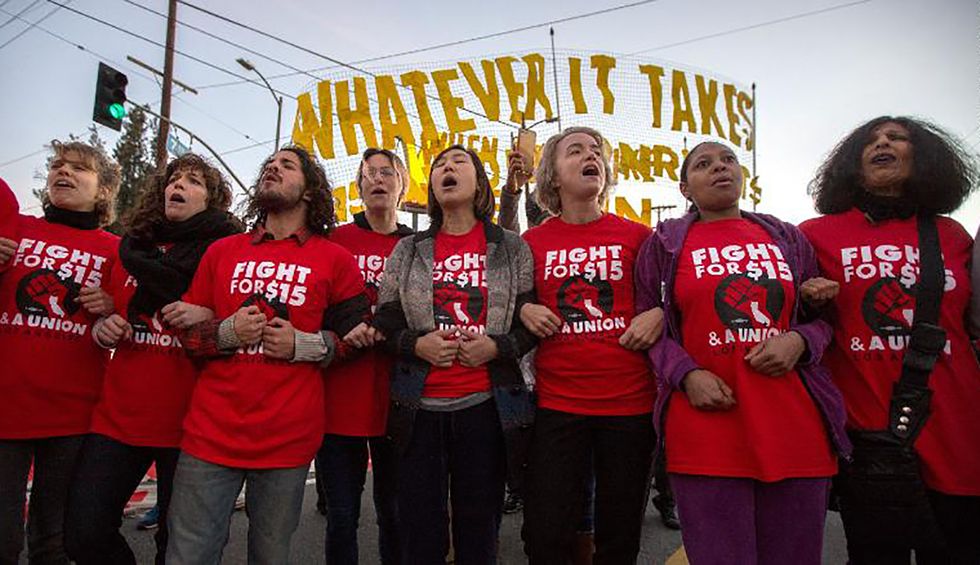 According to a press statement from organizers at the Fight For $15 campaign, workers from at least 50 stores across the state participated in a strike or protest. The mass labor action was inspired by a strike that started Sunday at a McDonald's in Los Angeles, after a McDonald's worker tested positive for the novel coronavirus.

"We don't want to die and we don't want anyone in our families to die because McDonald's is putting its profits ahead of our safety," Bartolome Perez, who has been on strike since Sunday at a Los Angeles McDonald's, said in a media statement. "McDonald's bottom line isn't the only thing that's essential. Our lives are, too. And we will keep joining together and standing up until McDonald's and other fast-food companies prioritize our safety."

On Wednesday, a second worker, Verli Godinez, who works at the McDonald's where Perez works tested positive for the coronavirus.

"McDonald's knew my coworker had tested positive, but they still had me flipping burgers last week, without a mask, and now I am also infected," Godinez said in a media statement.

Godinez, who has diabetes, worked in the store last week without a mask. On Wednesday afternoon, the store on Crenshaw Boulevard in Los Angeles shut down. Workers are demanding to be paid in full for a two-week quarantine period, meeting with management to discuss safety before returning to work, and to close another McDonald's on Crenshaw Boulevard (with workers being fully paid) because at least one worker worked in both stores last week.

The Service Employees International Union (SEIU) conducted a survey of 843 McDonald's workers in the U.S. between March 31 and April 6, 2020, which found that two-thirds of surveyed workers say the company is not doing enough to protect them at work during this time. Twenty-two percent of those surveyed said that, since the pandemic began, they had to come to work when they felt sick. Forty-two percent of workers surveyed who worked last week said that they were told by management not to wear personal protective equipment like gloves and masks.

Most McDonald's workers do not have paid sick leave; according to the survey, 47 percent of workers surveyed stated they still came to work while feeling sick because they can't afford to miss work right now.

Earlier this week, workers at the Los Angeles location and one in San Jose, California, filed complaints with California's Occupational Safety and Health Administration. They cited "imminent danger" in the complaint, due to a lack of personal protective equipment.

In an emailed statement to Salon, a McDonald's USA spokesperson expressed dismay over the strikes.

"We are disappointed by today's activities as they do not represent the feedback we are hearing from the majority of employees across the country where 9 percent of our Drive-Thrus are open to serve the healthcare heroes on the frontlines," the spokesperson said.

In a recent letter from Joe Erlinger, president of McDonald's USA, he stated that the company was implementing "wellness checks" on employees, sourcing and sending non-medical grade masks, and making gloves available for employees.

The California strikes are part of a bigger wave of strikes initiated by fast-food workers across the country. In Memphis, workers at Kentucky Fried Chicken echoed similar concerns to those at McDonald's in California, along with workers in St. Louis, and Tampa, too. Outside of the fast-food sector, workers at Instacart went on strike, and at Whole Foods workers staged a sick-out, too. The vast increase in organized labor action has led many to speculate that a general strike may be on the horizon.

Recently, the Centers for Disease Control (CDC) issued guidelines as to how essential workers, including food workers, can return to work after being exposed to the novel coronavirus. These guidelines include taking your temperature before work, wearing a face mask at all times, and practicing social distancing.

Yet the CDC suggestions have been criticized by civil rights nonprofits like the Southern Poverty Law Center for being inadequate.

"These workers are already putting their health and safety on the line every day to make sure that the rest of us are taken care of – from providing critical health care services to making sure we have food to eat," Meredith Stewart, senior supervising attorney with the Immigrant Justice Project, said in a media statement. "They shouldn't also be forced to go to work if they know they have been exposed to COVID-19. Requiring frontline workers to stay on the job after exposure to the virus puts their health and their co-workers' health at risk."