Even some of Bernie Sanders’ most ‘diehard’ supporters are open to voting for Biden if it will get Trump out of office: report 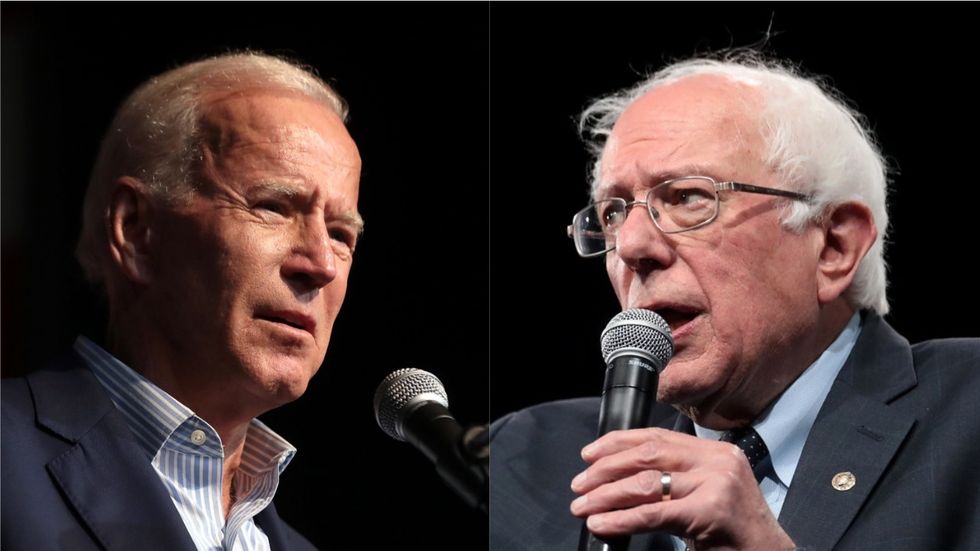 When Rep. Alexandria Ocasio-Cortez — easily Sen. Bernie Sanders’ most prominent ally in the Millennial generation — recently told comedian Seth Meyers that she would support former Vice President Joe Biden if he received the 2020 Democratic presidential nomination, it was obvious that even some of Sanders’ most hardcore allies would much rather have Biden in the White House than see President Donald Trump reelected. The “Bernie or bust” ideologues still exist, but journalist Sam Stein — in an article published by the Daily Beast on April 10 — finds that they are by no means representative of Sanders’ supporters on the whole.

Sanders was still in the race when, in early March, Meyers asked Ocasio-Cortez whether or not she could throw her support behind the centrist Biden were he to become the nominee. But now, it isn’t a hypothetical: Sanders officially dropped out of the race this week, asserting that Biden had an insurmountable lead in the number of pledged delegates. Sanders has been stressing that despite their policy differences, he would support Biden if he became the nominee — and the thought of supporting a Green Party presidential candidate in 2020 has never even crossed his mind.

Today I am suspending my campaign. But while the campaign ends, the struggle for justice continues on. https://t.co/MYc7kt2b16
— Bernie Sanders (@Bernie Sanders) 1586360720.0

For his article, Stein interviewed more than “two dozen Sanders diehards.” Many of them, Stein found, have changed their minds about refusing to support Biden.

One of the interviewees was Mike Ferguson, a 38-year-old Los Angeles resident who went from having a Bernie or bust attitude to saying that Biden most likely has his vote in November. Ferguson told the Daily Beast, “At the end of the day, I will probably end up voting for him.... I look at this like an addiction. We have to look at this like harm reduction. The only thing that will feel right to me is we have to get Trump out of office.”

The Bernie or bust crowd, according to Stein, is “part of a subset of voters that now could swing the course of the election.” Stein, however, reports, “In conversations with more than two dozen self-described Bernie or Busters, a nuanced picture emerges, suggesting that Biden’s hurdle may not be quite as difficult as Democratic doomsayers fear.”

Another Sanders supporter, 24-year-old Philadelphia resident Jason Peters, told the Daily Beast that even though Biden is “against everything that the youth believes in,” he “might have to vote for him because I have many friends who aren’t white, and I’ve witnessed race relations get worse. So, maybe things will feel a little better under Biden.”

Sanders supporter Mark Simmons, a 55-year-old resident of Madison, Wisconsin, told the Beast that he might vote for Biden because of “Supreme Court picks and judges.” However, Philadelphia resident Michael Pietrowski epitomized the Bernie or bust perspective when he told the Beast, “I believe Biden is an evil man with a lifetime of evil policy behind him, and I wouldn’t vote for him at gunpoint.”

As Stein’s article demonstrates, Biden is more likely to defeat Trump in the general election if there are more flexible Sanders supporters than inflexible ones. And Tad Devine, a top strategist for Sanders’ 2016 campaign, believes that Sanders and Biden are on friendly terms despite their policy differences.

“My impression is that Bernie has good chemistry with Biden,” Devine told the Beast. “They have a relationship. It’s easier for them to connect on a human level. I think a lot of it depends on Bernie's messaging to him and on Biden acknowledging that issues like climate and education and student debt matter and affect this voting bloc that is critical to Bernie. I would move on that front by recognizing that Bernie has good ideas.”