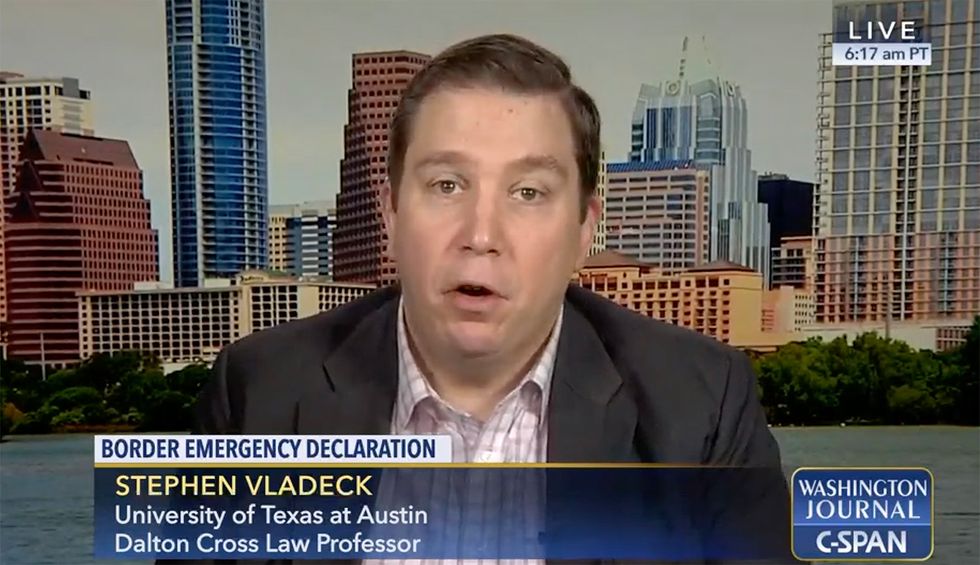 Monday was a disastrous day in Donald Trump’s coronavirus response, even by Trump’s disastrous standards. He ran a campaign ad during a coronavirus press briefing, leading MSNBC and CNN to cut away. His “Opening Our Country Council” promised to be a slap in the face to public health concerns—but his White House couldn’t even competently execute this terrible plan, whiffing the rollout by not being ready to name a roster of suck-ups or explain what the group would do beyond backing a plan to kill more Americans by reopening things too early.

Most problematically, though, Trump tried to declare himself dictator. “When somebody is the president of the United States, the authority is total and that’s the way it’s got to be. … It’s total. The governors know that,” he told reporters at his press briefing. This is false. The governors do not know that, because it is not true, as constitutional experts lined up to testify.

“Nope,” tweeted University of Texas law professor Steve Vladeck. “That would be the literal definition of a *totalitarian* government—which our traditions, our Constitution, and our values all rightly and decisively reject.”

”This isn’t ancient Rome where there’s a special law that says in the event of an emergency all the regular rules are thrown out the window and one person, whom they called the dictator, gets to make the rules for the duration of the emergency or for a period of time,” fellow University of Texas law professor Robert Chesney said. “We don’t have a system like that.”

Rep. Liz Cheney whose father, Dick, embraced a rather expansive approach to executive authority as vice president, tweeted her own sharp disagreement: “The federal government does not have absolute power.” Cheney went on to share the text of the 10th Amendment, that “The powers not delegated to the United States by the Constitution, nor prohibited by it to the States, are reserved to the States respectively, or to the people.”

Which is to say that the governors had the power to shut states down, and they have the power to keep them closed, and Donald Trump does not have the authority to reopen that which he did not close to begin with. The Constitution is clear on this point, no matter how many times Trump claims his “authority is total.”

That’s why blue state governors are banding together to come up with a better approach than Trump’s “Opening Our Country Council”—an approach led by public health rather than Trump’s assortment of people guaranteed to tell him what he wants to hear.