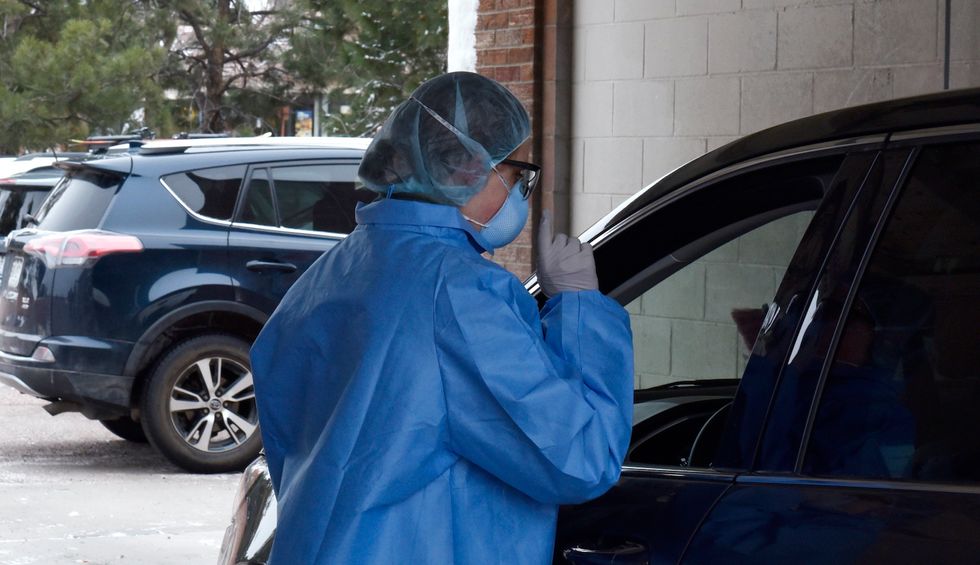 A 21st Medical Group professional tests an individual for the Coronavirus at Peterson Air Force Base, Colorado, March 20, 2020. In order to be tested for COVID-19, patients must first be evaluated by phone and meet criteria recommended by the Centers for Disease Control. Medical staff will test patients who will remain in their vehicle. (Air Force photo by Airman 1st Class Alexis Christian)
David Badash
and
The New Civil Rights Movement
April 01, 2020

A Pulitzer Prize winning newspaper is responding to President Donald Trump’s failure to manage the coronavirus pandemic, and is not holding back. The Boston Globe’s editorial board, far from a bastion of far left liberalism, is denouncing the nation’s President as “unfit for a pandemic.”

“Much of the suffering and death coming was preventable. The president has blood on his hands,” the Globe’s editorial board writes.

“As the American public braces itself for the worst of this crisis, it’s worth remembering that the reach of the virus here is not attributable to an act of God or a foreign invasion, but a colossal failure of leadership.”

Calling Trump “epically outmatched by a global pandemic,” the paper says the coronavirus outbreak “demanded a White House that could act swiftly and competently to protect public health, informed by science and guided by compassion and public service. It required an administration that could quickly deploy reliable tests around the nation to isolate cases and trace and contain the virus’s spread, as South Korea effectively did, as well as to manufacture and distribute scarce medical supplies around the country.”

“It begged for a president of the United States to deliver clear, consistent, scientifically sound messages on the state of the epidemic and its solutions, to reassure the public amid their fear, and to provide steady guidance to cities and states. And it demanded a leader who would put the country’s well-being first, above near-term stock market returns and his own reelection prospects, and who would work with other nations to stem the tide of COVID-19 cases around the world.”

Trump “embodies callousness, self-concern, and a lack of compass” in his “near-daily addresses to the nation.”

The Trump administration’s “critical errors” “will cost thousands if not hundreds of thousands of American lives,” and “come November, there must be a reckoning for the lives lost, and for the vast, avoidable suffering about to ensue under the president’s watch.”