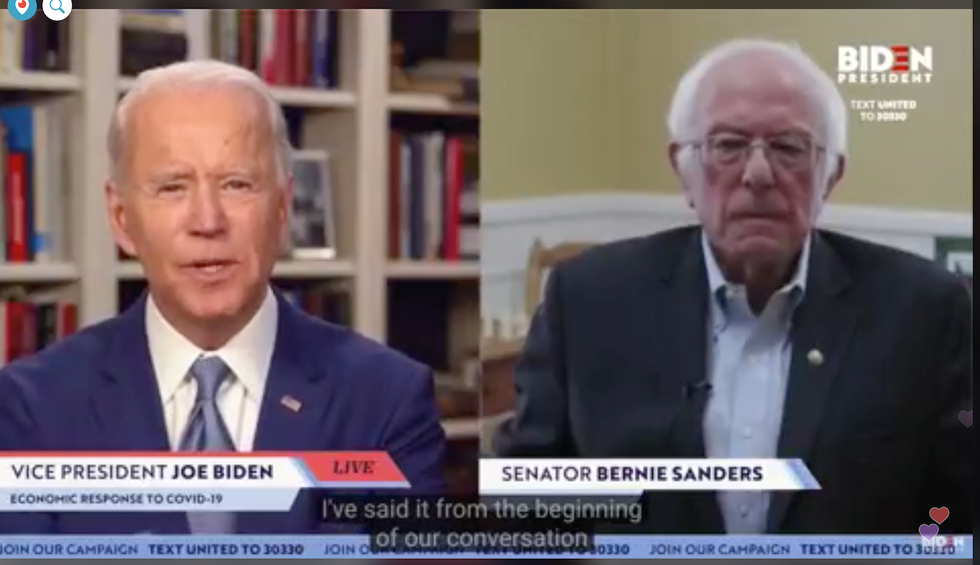 It was only last week that Sanders dropped out of the presidential campaign after a fierce and often contentious primary race. And Sanders' explicit endorsement of the presumptive nominee came much sooner this time around than it did after he dropped out of the Democratic primary against Hillary Clinton in 2016.

One possible explanation for the quick turnaround is that, as Sanders has repeatedly said, he is personally fond of Biden and has had a good relationship with him over the years.

"We must come together to defeat the most dangerous president in modern history," Sanders said in a tweet promoting the event.

The pair had an extended, friendly conversation in the video livestream about the needs for American policy going forward after the coronavirus and the importance of defeating President Donald Trump. Given the levels of animosity between some in the Biden and Sanders camps throughout the campaign — including some ongoing vitriol between the camps since Sanders dropped out — it was remarkable to see the two politicians have such a conciliatory and productive dialogue.

Biden solicited Sanders' views on how the United States can rebuild itself after the coronavirus crisis, and he signaled that he views his potential presidency as more transformative, and less restorative, than it has often been viewed.

"When we come out of this, we can't just go back to business as usual," Biden said, saying that we must fix what's "deeply broken" in the country.

They announced that they are forming six policy working groups, with policy thinkers who have worked with both Biden and Sanders, to develop plans for the future on key issues facing the country, such as climate change. It showed that the pair is willing to work collaboratively much more actively and enthusiastically than many on either side of their political divide may have expected.

Biden also spoke directly to Sanders supporters, saying he wanted to embrace his new ally's former campaign slogan: "Not me, us."

"I see you, I hear you, I understand the urgency of what we need to do in this country," Biden said.