A doctor explains what Trump gets wrong about the drug he hopes cures COVID-19: 'Reckless and irresponsible' 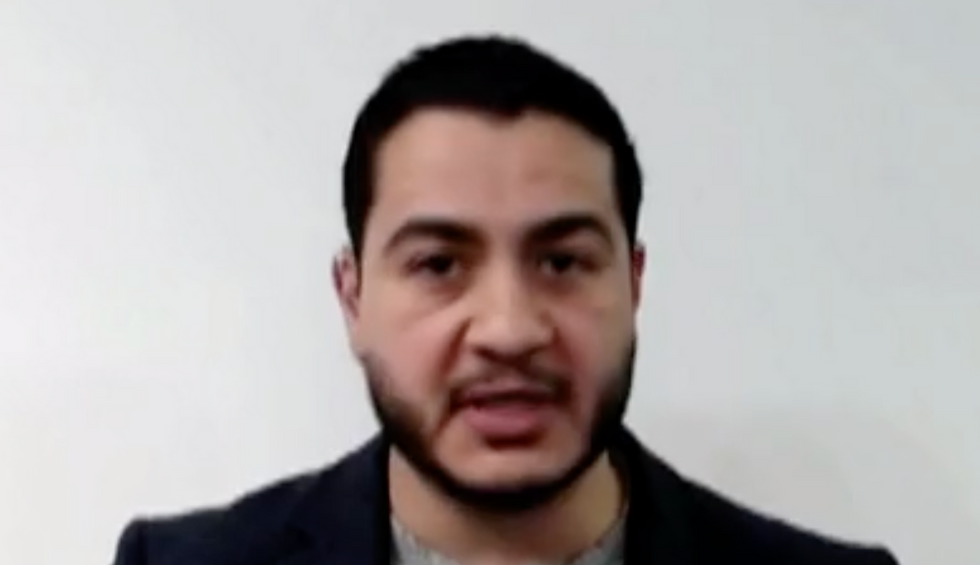 The coronavirus hot spot Detroit is the site of the first major U.S. study into whether or not the anti-malarial drug hydroxychloroquine could help prevent the spread of COVID-19. This comes after weeks of President Trump promoting the drug despite warnings from medical experts. “There’s been a lot of hype from the president, and that is so problematic, because we know that hydroxychloroquine … has some potential side effects that can be really dangerous,” responds Dr. Abdul El-Sayed, a physician and epidemiologist who is the former head of Detroit’s Health Department.

AMY GOODMAN: This is Democracy Now! I’m Amy Goodman, as we head to Detroit, where the Henry Ford Health System has launched the first major U.S. study into whether the anti-malarial drug hydroxychloroquine could help prevent the spread of coronavirus, following weeks of President Trump promoting the drug despite warnings from medical experts. The study was announced last week with Detroit Mayor Mike Duggan and will test 3,000 people to see if use of the drug can keep them from getting sick with COVID-19. President Trump has repeatedly urged Americans to take hydroxychloroquine to treat COVID-19 symptoms, despite Dr. Fauci and others warning there’s still insufficient evidence for its effectiveness in treating the virus.

This comes as a study in Brazil involving chloroquine’s effect on coronavirus patients was stopped after participants developed irregular heart rates that increased the risk of a potentially fatal arrhythmia. A man in Arizona died last month, his wife went into critical condition, after the couple took chloroquine to try to prevent a coronavirus infection.

Meanwhile, in the U.S., lupus patients have reported shortages of hydroxychloroquine, a drug they need, following Trump’s recent statements.

This all comes as The New York Times reports Trump could personally profit if sales of hydroxychloroquine increase, because he owns a small financial interest in a French company that makes the drug.

And the only study that has been cited around hydroxychloroquine, a French study, the journal recently pulled that study, saying it wasn’t well done.

Well, for more on hydroxychloroquine and also the impact of COVID-19, we’re going to Detroit to speak with Dr. Abdul El-Sayed. He is a physician, epidemiologist, former director of the Detroit Health Department. His new book is titled Healing Politics: A Doctor’s Journey into the Heart of Our Political Epidemic. Metro Detroit became one of the nation’s COVID-19 hot spots.

Dr. El-Sayed, welcome back to Democracy Now! So, we have this Brazil study, which they stopped because it endangered the people who were being tested. At Henry Ford Hospital in Detroit, there is a study that’s happening because the president has been pushing this so relentlessly. Can you talk about the significance of this study, who’s involved, what kind of informed consent there is, and why you actually support it?

DR. ABDUL EL-SAYED: Yeah. So, let me step back for a second. The whole goal of science is to take what we want to happen out of the picture and formalize a process that takes our biases out and asks, “What is the fact about whether or not a particular medication or particular treatment can do for a particular outcome?” And we ask questions about the safety and the efficacy.

We do know that there’s been a lot of hype from the president. And that is so problematic, because we know that hydroxychloroquine, number one, as you mentioned, has some potential side effects that can be really dangerous, and, number two, that there are people who really need hydroxychloroquine, and if you all of a sudden create a run on the medication, they might not have it.

This study at Henry Ford recruits 3,000 volunteers from the frontlines of healthcare workers, who are most at risk, and randomizes them to receiving either hydroxychloroquine or a placebo, to ask whether or not those who had hydroxychloroquine were less likely to be infected, considering the same overall exposure. And the reason why this is so important is because we don’t know whether or not hydroxychloroquine is safe and effective for either the treatment of COVID-19 or the prevention of COVID-19. The only way to ask is to run a randomized control trial that controls for differences in the baseline probability of having gotten both the treatment and having had the outcome. So this is an important piece of science and the only way that we can know, right? Take away the spin from the president, take away the spin from anywhere else, and just ask, “Does this work? Is it safe and effective?” The only way we know is through the scientific process. And this is a competent study to do that.

AMY GOODMAN: Wasn’t there a study that just recently leaked out of two Detroit hospitals dealing with chloroquine?

DR. ABDUL EL-SAYED: So, I’m unfamiliar with that literature. There have been a number of studies that are ongoing. The truth of the matter is, though, is that we do not have consistent evidence from randomized control trials. That’s why you see the president’s top adviser, Anthony Fauci, consistently pushing back against President Trump’s continued —

AMY GOODMAN: Do you think President Trump is pushing this because he has a financial stake in a company that ultimately makes hydroxychloroquine?

DR. ABDUL EL-SAYED: It’s plausible. I’ve heard and I’ve seen reporting to that end. The key point to me — right? — is just that, A, this is reckless and irresponsible, because you have to put the scientific process first, and the scientific process has not borne out whether or not this is safe and effective.

And I just want to make a point. I hear folks argue that hydroxychloroquine is used in folks with diseases all the time, of course it should be safe, now the question is whether or not it’s effective. That’s not necessarily true, because we know that underlying biology can change the way that the body processes certain medications. Hydroxychloroquine may be processed differently in people suffering from COVID-19. You talked about the results of that study that got stopped prematurely in Brazil. And then the French version of the FDA just recently released pretty concerning evidence suggesting that it’s plausible that the baseline risk of arrhythmias, cardiac outcomes, in patients with COVID-19 may be higher than one would expect at baseline. And so, we’ve got to ask —

AMY GOODMAN: And here you have President Trump saying, “What do we have to lose here?” When I speak to people with lupus, they’re shocked that he is pushing it so aggressively, that just folks should take it — “What do you have to lose?” — because they say because they take hydroxychloroquine for lupus, they have to be monitored very carefully around heart issues, even around blindness.

DR. ABDUL EL-SAYED: That’s absolutely right. And so, there’s a lot of potential loss there. And then, for those people who need hydroxychloroquine to keep their lupus symptoms down — and for folks who don’t know, lupus is a really scary disease. Even the name “lupus” comes from the name for “wolf,” because it can attack at any time in any place in the body. And so these people need that medication. And creating a run on, because of irresponsible pushing of a medication, on that medication for folks who need it, that’s a lot to lose for them, too. And so, this is not proven safe, and it’s not been proven effective. We need good science to show whether or not it is safe and effective for either the treatment or prevention of COVID-19.

AMY GOODMAN: Dr. Abdul El-Sayed, your book is so significant, Healing Politics, because it really, in a way, predicted what we’re seeing in this country right now with the racial disparities around who lives and dies with COVID-19. In your own city of Detroit, in New Orleans, in Chicago, disproportionately African Americans are dying. Why?

DR. ABDUL EL-SAYED: Well, Amy, you know, we talk a lot about the pathogen — in this case, the coronavirus. But what this book is about is about an epidemic of insecurity that affects the host, and it is a function of the environment. And so, as we ask questions about where COVID-19 will go, it is following a well-worn path toward society’s most vulnerable, people who have been made vulnerable by a system of economics, a system of political marginalization, a system of lack of access to basic resources, including, fundamentally, healthcare, in this moment, that leaves people vulnerable, increases the probability of both the infection with COVID-19 and then death because of COVID-19. And we’ve got to stand up and say that enough is enough. We are going to fix these fundamental vulnerabilities in our society, so that, A, something like this doesn’t happen in the future, and then, B, that even if it does, that we’re prepared for it, that people don’t have to suffer as a function of the poverty for which they’ve suffered for far too long.