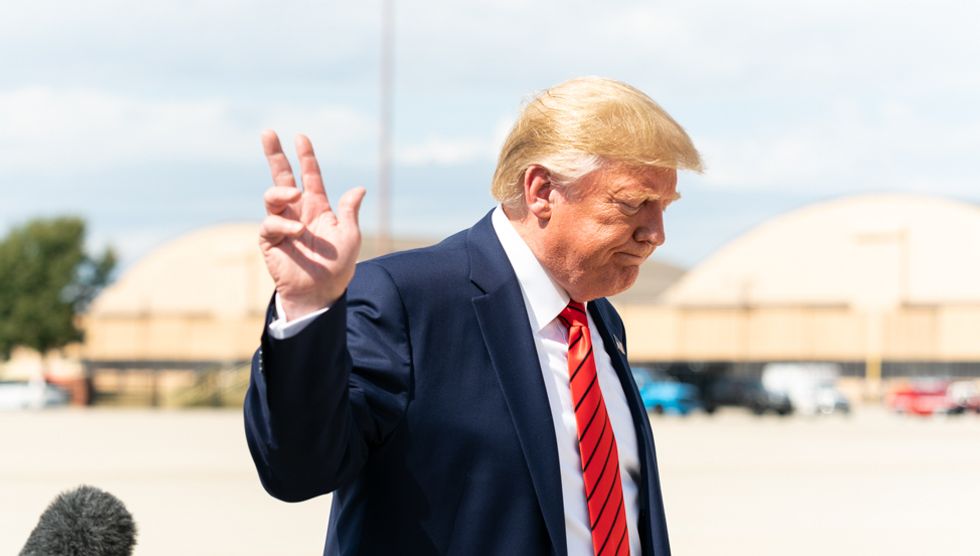 President Donald Trump recently attempted to explain the complex relationship between the federal government and the states, as outlined by the framers in 1787.

Trump’s statement, along with several others he has made recently, highlights one of the key issues that has affected America’s response to the coronavirus pandemic: federalism.

In its most basic terms, “federalism” is the Constitution’s way of distributing decision-making authority. The Constitution grants the national government the power to conduct certain activities and reserves the rest of governmental decisions to the states.

But who does what is not always clear-cut.

Throughout the coronavirus crisis, the president has made contradictory statements about who is responsible for key aspects of the nation’s response to the pandemic.

For example, while Trump asserted he has the authority to order the states to reopen the economy, he also insisted that it is the governors’ responsibility to manage coronavirus testing. From my perspective as a constitutional scholar, Trump’s statements are haphazard at best and unconstitutional at worst.

But what is the president’s role when it comes to guiding the nation through the pandemic? How much power do state governors have? Who is in charge?

One of the most difficult tasks facing the framers when they drafted the Constitution was the proper distribution of power. Americans’ experience living under British rule taught them that power centralized in a single executive could lead to oppression. As a result, many were reluctant to grant too much power to a president.

This reluctance was reflected in the Articles of Confederation. The articles, which were adopted after the Declaration of Independence but before the Constitution, gave a lot of power to the states and almost no power to the national government.

Yet early American governance under the articles illustrated that individual states can fail to work together to overcome big problems, like national security.

What became clear to the Founding Fathers was that a central authority is often necessary to coordinate the responses of individual states to the big economic and security issues that face the nation.

The framers’ solution to this problem was to grant the national government authority to regulate citizens but not to regulate the states themselves. Put in the most basic terms, Congress and the president lack the constitutional power to tell states what to do.

The Constitution gives the federal government the ability to address national issues like defense, foreign policy and monetary policy. The states retain the power to address the well-being of their citizens. This includes setting health and education policy and even regulating elections.

The constitutional balance between state and federal power is still in flux. Enormous changes in our federal system mean that the national government now takes on challenges that the framers of the Constitution could not have imagined. For example, the national government protects human health by regulating the environment and helps our ability to communicate by providing uniform standards for internet technologies.

As a result, the president has more expansive power than anticipated. Yet, a large part of the president’s executive and administrative tasks involves managing the relationship between the national government and the states.

Sometimes this occurs by providing states with opportunities for federal funding but attaching conditions to the receipt of those funds. For example, the Obama administration routinely used federal funding to encourage states to adopt his preferred health care policies.

Federalism is often viewed as a conflict between the national government and the states. Yet there are many areas in which coordinated action between all levels of government occurs on a regular basis.

Health care is a prime example. While states have the constitutional power to regulate health and welfare, there is a long history of national government involvement in health policy.

Historical crises such as the Great Depression and the two World Wars highlighted the fact that not every state has the means to address all of the medical needs of its citizens. Every president since Franklin Delano Roosevelt has used the national government to expand or improve health care in the states.

The framers recognized the importance of national government in times of crisis. Both James Madison and Alexander Hamilton acknowledged the need for unified, national leadership when the country faced threatening circumstances. Madison said in the Federalist Papers, “The operations of the federal government will be most extensive and important in times of war and danger; those of the State governments, in times of peace and security.”

The coronavirus is such an emergency.

What does all of this constitutional history mean for the nation’s response to COVID-19?

First, consistent with constitutional principles, the national government’s US$2 trillion response bill is largely directed at providing help to individuals and private entities. The provisions of the bill that do relate to state and local government simply offer opportunities for federal funding.

Second, the Trump administration retains the authority to administer funds. President Trump has used this authority to do things like direct military aid to states and relax rules that regulate government approval for coronavirus testing. He also has announced guidelines for states to use when reopening state economies.

However, consistent with the Constitution, governors have discretion whether to implement these guidelines.

This means that it is still up to individual states to craft policies that protect the health and welfare of their citizens during this time of crisis. Some states are working closely with the White House, and others are coordinating their response efforts with neighboring states.

So if America’s response to the coronavirus crisis will likely remain piecemeal and state-specific, perhaps this is what the framers intended.