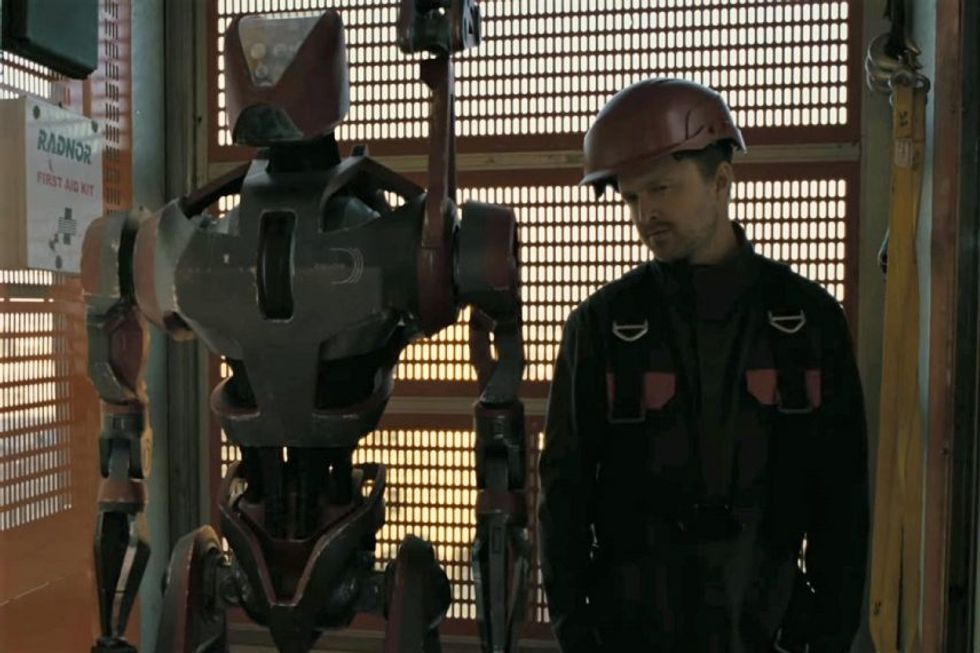 Grinding, the video game term for earning currency or winning loot, is an essential aspect of modern gameplay. It's pretty much the only way to access better equipment – deadlier weapons, more effective armor and power-ups – as one progresses through increasing levels of difficulty.

Depending on how much you want the really good stuff, though, grinding can also become a second job. Hence, gamers have a love/hate relationship with it, especially since the amount of time a player puts in to obtaining better stuff tends to be rendered obsolete by the commensurate leveling up that happens as part of those missions.

"Westworld" speaks to this conundrum as it enters its third season within its narrative, even as the show itself contends with the flip side of grinding – that deflating "Is that all there is?" feeling that can accompany the end of a mission.

The effort its writers had put in to plying the viewer with puzzles, philosophy, literary references, and mystery came at the expense of building a robust central story worth following for 10 episodes . . . rather, that's how some viewers had seen the first two seasons.  Others, myself included, enjoyed the sparks of meaning offered by characters like Thandie Newton's Maeve Millay and what they symbolize in the larger staged play that serves as a reflection of social hierarchy and conditioning.

But even that richness became watered-down gravy over time, subsumed by the drama's simplistic seasonal arc: the race to The Valley Beyond, and the fatalistic outcome teased in the second season premiere.

This brings us to the third season of "Westworld," aka the big boss level where the stakes are supposed to be higher. And they are, at least nominally; its missions feel more streamlined. Perhaps this is because the action has moved to an arena we understand: a version of our existence. Its Earth exists in a not-too-distant future where technology has evolved, making human beings less connected to their humanity than ever and life even cheaper that it seems to be now.

As always, a viewer's enjoyment of what series creators Lisa Joy and Jonathan Nolan present with "Westworld" entirely depends on what perspective of life, society, and reality one brings to it, which bodes well for Season 3 in some regards and in others, appears to play heavily toward seeming too obvious.

The first season pulled off an engaging mystery braiding timelines, paradigms, and perspectives. Season 2 fell short on that front, leaving many viewers cold or even downright disdainful at its attempts at injecting complexity and allegory into what was expected to be an exciting robot uprising full of tension and explosions. What we got instead was a whole lot of mental grinding, which, again, invites some of us to meditate and others to change the channel.

But even as the four hours HBO made available to critics address some critiques of over-complexity, I wondered whether the series itself may have lost something in its striving to come across as more user friendly.

"Westworld" picks up a short time after the events of the second season finale, when a number of characters – android host and human – met their demise in the hosts' massive move toward the aforementioned big Valley, a digital afterlife for the android consciousness set beyond the reach of humankind.

One of the "awakened" androids, Delores (Evan Rachel Wood), never intended to surrender her physical form to that place. Her goal was to enter the real world and seize it for her kind as part of a vengeance mission, bringing along Bernard (Jeffrey Wright) as an adversary to spur her along as well as Charlotte Hale (Tessa Thompson), the overseer of Westworld.

Most of the third season premiere manifests as a shoot-'em-up interspersed with elements recognizable to anyone who has watched "The Matrix," "Blade Runner," "Johnny Mnenomic," and other cyberpunk flicks. In one moment, farm girl-turned-raging-robot-revolutionary Delores Abernathy goes full "Terminator," and as if my TV were reading my thoughts as I noted this, Ramin Djawadi's score replied with clangs of Brad Fiedel's signature metallic heartbeat from that old James Cameron classic.

Those types of cinematic homages were always present; now they're front-facing. HBO's "Westworld" never was a pure Western or direct adaptation of Michael Crichton's 1973 movie, choosing instead to present a parable of man's relationship to artificial intelligence dressed in boots and a cowboy hat. Now it's every robot-android-mecha story you can think of – not one movie, but all the movies, with a hint of "Rick and Morty" thrown in there for good measure. (That reference will make more sense about midway through the season.)

The charm in such a pop culture parade isn't sustainable over this truncated season of only eight episodes, but fortunately, Aaron Paul's Caleb is here to help. Paul's role was used to tease the third season in promos, which is probably the smartest move HBO's marketing department could have made next to also revealing that Newton's Maeve is returning.

People who may have been tempted to roll their eyes at seeing Wood's Delores pop up again – even now, nearly two years after the last time we saw her – had to have been at least intrigued by the notion of seeing where good old Jesse Pinkman fits in to all this.

Initially Paul's role is to play the show's Everyman avatar, a blue-collar guy trapped in a spiral of meaningless existence. Caleb is a veteran doomed to never get ahead given the nature of how the near-future economy works which, not shockingly, resembles the terrifying next evolution of our current one. Caleb works construction, but his salary is too meager to pay his bills and care for his hospitalized, dementia-stricken mother.

To make ends meet, he occasionally accepts petty crime jobs conveniently made available via an Uber-style app. In fact, most of Caleb's life is automatic or gamified in ways such as this, making him a pawn in a game he can never win, and his reality one not of his making. Ergo, the real world and the live-action simulation Delores ached to destroy may not be so different after all.

"Westworld" needed real humanity, unprogrammed and flawed, and Paul's performance is a saving grace in this respect. The premiere constructs this new area of "Westworld" stage through his eyes and his character, and his performance is raw and aching, intentionally devastating.

This takes nothing away from Wright's continuation of Bernard, the most human of the hosts, or the reappearance of other characters such as Ed Harris' William, even if only to tie up their storylines. Thompson, meanwhile, gets a few more tricks written into Charlotte's code that transforms her mercenary nature into something else, adding on fire and vulnerability.

Thankfully Newton is as magnificent as she ever was, returning in stellar form despite appearing to have been destroyed at the end of the second season. "Westworld" is one of the few shows on TV where the audience can see a body and still not be sure if a character is truly gone.

A portion of the audience-baiting elements that gave "Westworld" its own "uncanny valley" issues also remain. Some of them work: a pair of cameos by NFL star Marshawn Lynch and Lena Waithe are entertaining nods at celebrity-cast roles in games like "Grand Theft Auto," which makes it simpler somehow to cheer them on for looking cool while they commit crimes. Or it could take a person out of the experience.

Season 3 introduces a new player to the board, Vincent Cassel's Serac, whose full role in the story isn't fully revealed in the hours made available. A twist midway through the season somewhat clarifies the lines between the different shades of black hats roaming and shaping its urban and ecologically degraded arena.

The stakes emerge with fair efficiency in these new episodes along with a few juicy questions about who the audience is supposed to root for and whether the threat of a robot uprising even matters anymore in a world already overpowered by artificial intelligence.

This loops us back to Delores. A common critique of the series up to this point has been that it is much more successful as an action romp than a philosophizing work, and in certain respects, that's true. Efficient assassin Delores is a lot more fun than the glitchy programmed damsel of Season 1, and the grim authoritarian would-be deity of Season 2.

Now that she is no longer constrained by the park or under the control of Delos engineers, she's free to wreak whatever havoc she sees fit upon the world of the near future. But is she Skynet, or is she Sarah Connor?

Widening the lens even more, is Delos and its stealth data mining operation of its wealthy customers the greatest threat to humankind, or is something infinitely worse lurking outside the door?

Is this, as I mused aloud two seasons ago, a fancy intellectual strut toward a disappointing payoff? In choosing to ride along with this adventure, which may indeed be the series' last, I will cautiously muse aloud that I don't believe that to be the case.

Maybe instead we can at least accept that "Westworld" wasn't designed to change the way we see humanity or our individual selves. But at the very least it stands a chance of leaving us satisfied with its endgame . . . if we choose to put in whatever amount of work it asks of us.