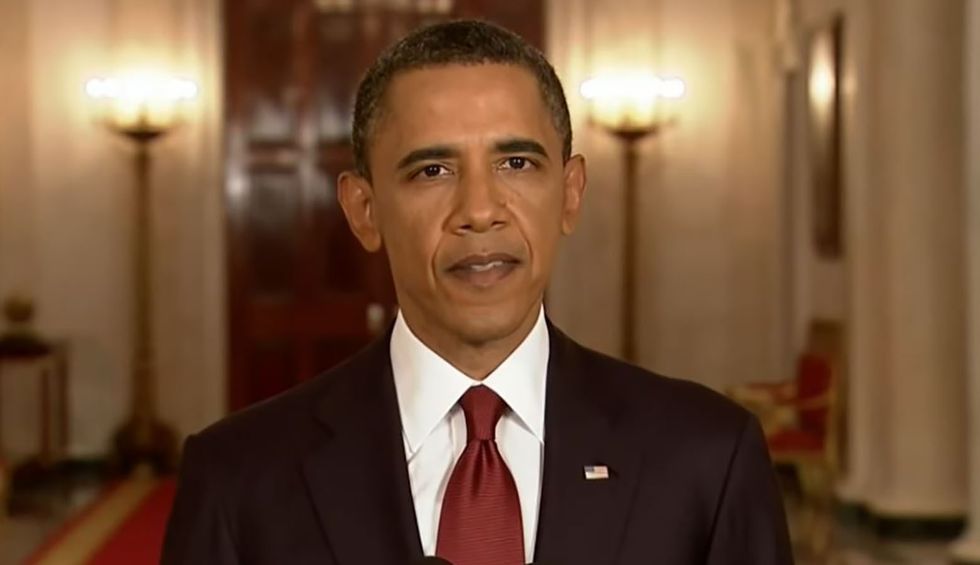 “It looks like the coronavirus is being weaponized as yet another element to bring down Donald Trump," Rush Limbaugh, February 26, 2020

The Man Who Lost The Popular Vote has said much the same, accusing Democrats of “politicizing the coronavirus,” which he characterized as “their new hoax.” Fox News and others in the rightwing media fell right into line as well.

Let’s deal with the substance of this in the manner in which it deserves. First, Limbaugh is a stone-cold liar (and so is Trump)—although we knew that simply by the fact that his lips were moving. Second, and I’ll try not to spit as I scream this: Limbaugh and his shamelessly hypocritical buddies on the right weaponized Ebola to (try and) defeat Barack Obama. There, I feel a little better. And here’s the evidence, which I gathered researching my new book on how Limbaugh paved the way for Trump by spending eight years deploying the worst kind of hateful, racist rhetoric against President Obama

After having spent several shows in July and August 2014 using the outbreak of the Ebola virus—which, counting only documented cases, killed over 11,000 Africans and one American—as a reason to “close the border,” on Sept. 8, the host pondered whether the enterovirus D68 outbreak that ultimately infected people in all but one state, and which may have killed fourteen (they tested positive but their deaths could not be definitively linked to EV-D68) was connected to the unaccompanied minors from Central America, and noted that “some people” believe it could be. Limbaugh also wondered whether the White House was covering up such a connection. Talk about weaponizing illness.

In October, the Ebola story began to dominate the media. Republicans, including Limbaugh, hyped fears about the virus and used it to depict Obama as incompetent leading up to the midterm elections. More specifically, the host linked Ebola and immigration and/or border security on nine out of his first thirteen October broadcasts, and on two other occasions later in the month. In addition, Limbaugh talked up the Ebola scare on six other occasions in October as well. On Oct. 16, Limbaugh revisited EV-D68 and the unaccompanied minors.

After Election Day, Ebola suddenly dropped off the radar screen for Limbaugh and the right in general, making clear the political nature of their previous focus on the issue. Journalist Elise Viebeck called it the “2014 October surprise.” Talking about Ebola and, in particular, connecting it to border security, had served its purpose, however, as Democrats lost 13 House seats and, more importantly, nine Senate seats—which ended their eight-year run as the majority party in that chamber. David Axelrod rightly termed what Limbaugh and Co. did “panic peddling.”

Three weeks ago, it was a media and political frenzy. Today, not one person in U.S. is being treated for Ebola. #panicpeddling
— David Axelrod (@David Axelrod) 1415711751.0

That’s a slightly revised version of the summary I offered in the book. This post offers the opportunity to look at what Limbaugh said in much greater depth, starting with his remarks of August 1, 2014.

After two American missionaries who contracted Ebola while caring for other Ebola patients were brought back to the U.S. for treatment, Limbaugh started right in with the weaponizing.

So we're going to import the crisis.  Right. (interruption)  Well, if that's what you think, if you think that because Rahm Emanuel said that no crisis is too great to waste and they're somehow political -- you've learned that from me.  I know you have, because I have properly said that every event that attracts mass attention is going to be converted into advancing a Democrat Party agenda.  Right?  Every time we give them the benefit of the doubt we're proven wrong.

So how about this?  How about just as it's not fair that the Israelis are the only ones that have the Iron Dome, could it be that, hey, it's not fair that Ebola has not broken out in America and it does in Africa and all these other poor countries, it's not fair. You can't possibly believe that they would import two cases of Ebola just for that reason.  Anyway, that is happening, and I just, cutting edge, I'm going to tell you there are going to be people questioning why. And the people who question why are going to be tagged as heartless, cold, mean-spirited, uncaring, whatever. And I think just the very act of bringing those two Americans here, that is where the credit and the advancement of the Democrat agenda will be attached, with just the act of bringing them here.

Additionally, Limbaugh attacked Obama for supposedly underselling the seriousness of Ebola. Bear in mind that Limbaugh recently proclaimed that the coronavirus was pretty much the same as the “common cold.” But Obama’s the one who undersold an epidemic? Sheesh. On Oct. 1, the host went hard after Obama.

Now, wait a minute.  I thought it was very hard to catch Ebola, especially in the United States.  We were told that by the president.

Do you think he knows Ebola from eshmola?  Really, we haven't had somebody as unqualified serve in this office as this guy in a long time.  But yet here he comes: "In the unlikely event somebody with Ebola does reach our shores," after saying it couldn't happen, "we've taken new measures so that we're prepared here at home." What new measures?  He just goes out and says stuff, just go say it, that's all, just say it, make a speech, give some remarks, that will make people feel better.

The next day, Limbaugh charged Obama with making Americans sick because he’s a liberal. I’m not kidding.

I'm gonna take you back to 2010, the archives of USA Today: "Obama Administration Scraps Quarantine Regulations." This story will explain to you why Obama isn't doing anything to stop flights to and from countries where Ebola has broken out or why he's not doing anything to stop people with diseases from pouring into the country.  It's largely because the ACLU and Obama think such measures are unfair.

Now, how many times did the administration and the news media make fun of or mock people for suggesting that somebody might come across the border with Ebola?  Ever since the Ebola outbreak occurred, coupled with our open borders, there have been people warning, are we doing anything?  Are we being vigilant?  Are we making sure that this disease is going to be kept out of the country?

Oh, yeah.  Oh, there's nothing to worry about.  Obama goes out, "It isn't gonna happen."  It's a hard disease to get, the CDC guy said, it isn't gonna happen.  And everybody who worried about it was mocked and made fun of and there were intimations that we were listening to racists and bigots. That's what it means.  If you want steps to be taken to protect your country and the population of your country, and yourself and your family, you're bigot.  You are not behaving properly according to the tenets of political correctness.

The day after that, Limbaugh slammed the Obama Administration’s Ebola policy and connected it to the policy on immigration—while adding a side of fear-mongering about undocumented Latino immigrants.

The Obama response to this, given how relativity limited the Ebola problem was -- given all the warnings Obama had, given the fact that nobody's trying to stop the Regime from helping -- and still it's being treated and dealt with in the most irresponsible, incompetent manner I can think of.

He can't close the borders.  It's all political.  This is my never-ending point.  The reason he's not gonna stop the flights from Africa or anywhere else Ebola happens to be is because he's gonna do amnesty down the road.  He promised the Hispanics yesterday it's gonna happen.  He was bragging about the fact that he rode to the Hispanic speech with a couple of illegals. He's bragging about it, and he's promising 'em it's gonna happen.

Well, you can't shut down flights from Africa.  You can't you can't close the border. Not if you later plan on using the open border for amnesty.

It was good to see at least some in the media—well done as usual, Paul Krugman!—call out this blatant hypocrisy from Limbaugh, Trump, and their ilk. But even the main news article in Krugman’s own paper—the illustrious New York Times—which detailed the rightwing lies about the coronavirus being weaponized, and rightly characterized one of Limbaugh’s statements as “a baseless claim”, failed to highlight that the right-wing did exactly that to Obama on Ebola.

The hypocrisy—not to mention the projection from right-wingers here—isn’t a matter of opinion, and it shouldn’t be limited to the op-ed pages. The job of journalists is supposed to be to tell the whole story.

Ian Reifowitz is the author of The Tribalization of Politics: How Rush Limbaugh's Race-Baiting Rhetoric on the Obama Presidency Paved the Way for Trump (Foreword by Markos Moulitsas). Some of the material in this post is excerpted (in some cases with slight alterations) from the book, with full permission.