Watch: Reporter spars with Senate GOP as they complain about unemployed people getting too much money 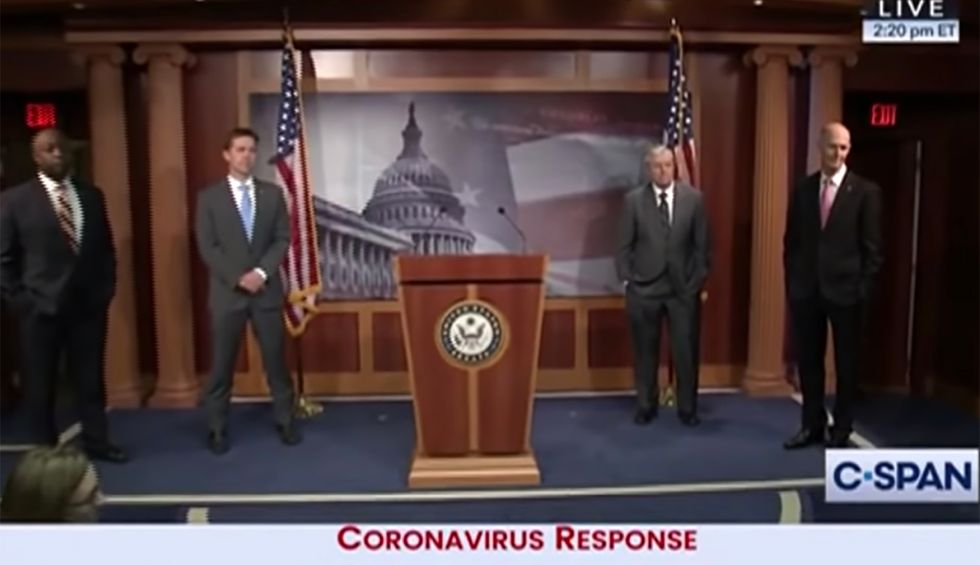 During a press conference addressing the government’s response to the coronavirus outbreak, GOP lawmakers mentioned an alleged “drafting error” in the $2 trillion coronavirus spending bill. The lawmakers claim there’s a portion of the bill that incentivizes Americans not to work since the relief package could potentially give them more money than their normal incomes.

In a statement put out before the press conference, Senators Tim Scott (R-SC), Lindsey Graham (R-SC), and Ben Sasse (R-NE), said: “A massive drafting error in the current version of the coronavirus relief legislation could have devastating consequences: Unless this bill is fixed, there is a strong incentive for employees to be laid off instead of going to work.”

“This isn’t an abstract, philosophical point — it’s an immediate, real-world problem,” they continued. “If the federal government accidentally incentivizes layoffs, we risk life-threatening shortages in sectors where doctors, nurses, and pharmacists are trying to care for the sick, and where growers and grocers, truckers and cooks are trying to get food to families’ tables.”

But according to Senator Chuck Schumer (D-NY), the portion of the bill in question “increases the maximum unemployment benefit amount by $600 per week above one’s base unemployment compensation benefit and ensures that workers who are laid-off or out of work, on average, will receive their full pay for four months, a full quarter.”

While the three Republicans took questions, one reporter challenged them on the optics of holding up the bill over a technicality that might give Americans more money.

“I apologize — I don’t know how to ask this without sounding like I’m being a smart ass, and I’m not,” the reporter said off camera. “But do you understand how bad the optics are to have probably the wealthiest person in the Senate potentially holding up this bill for a couple hundreds bucks for some of the poorest people in this country?”