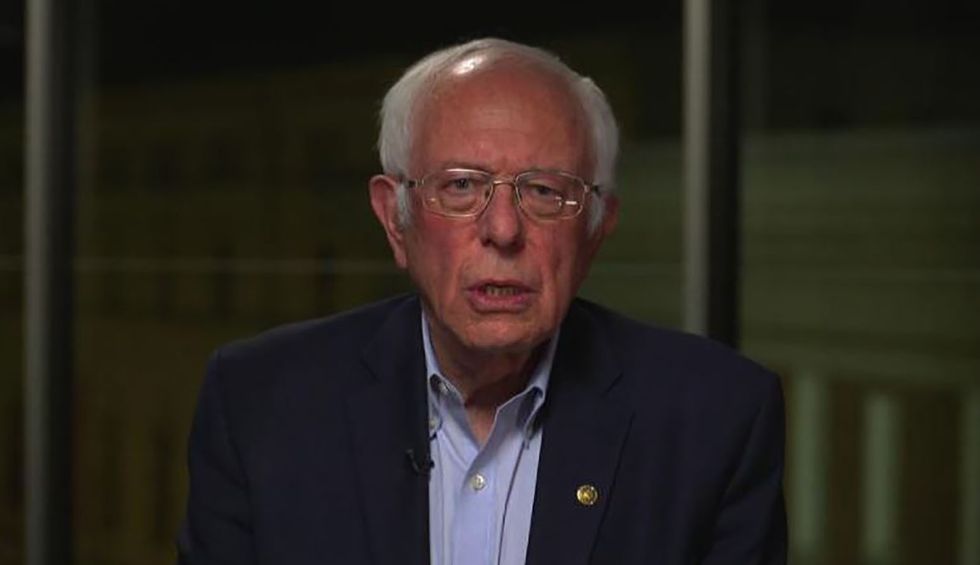 After President Donald Trump declared during a Fox News town hall Thursday night that his administration "will be cutting" non-discretionary spending programs like Social Security if he wins a second term, Sen. Bernie Sanders argued Trump's promise makes clear that Democrats must nominate a 2020 candidate with a consistent record of defending Social Security—not Joe Biden.

"Here's the deal: Joe Biden has repeatedly advocated for cuts to Social Security. I've fought my whole career to protect and expand it," Sanders tweeted after Biden responded to the president's comments with a call to expand Social Security.

Biden, without disputing Sanders' characterization of his record, replied that the "only person who's going to cut Social Security if he's elected is Donald Trump" and added, "Maybe you should spend your time attacking him."

"Get real, Joe," tweeted Sanders. "One of us has a history of not only fighting cuts to Social Security but working to expand benefits. And that's why we are the campaign best positioned to defeat Donald Trump."

The president's vow to cut non-discretionary government spending came during an event in Scranton, Pennsylvania—Biden's birthplace—where Trump also took aim at the former vice president's vote in favor of the 1994 North American Free Trade Agreement, which accelerated the loss of manufacturing jobs in Pennsylvania and across the Rust Belt.

"Joe Biden made a deal, NAFTA," Trump said. "He approved it, he was pushing it. It's the worst trade deal ever made."

Bernie Sanders has been warning of this for months — the best chance to win back Michigan, Wisconsin and Pennsylvan… https://t.co/kCRxQnBUU3
— David Sirota (@David Sirota)1583457119.0

Faiz Shakir, Sanders' campaign manager, said in a statement that Trump's comments on NAFTA and safety net programs represented a preview of the president's potentially effective lines of attack against Biden in key battleground states if the former vice president wins the Democratic nomination.

Sanders, Shakir argued, would not be vulnerable to such attacks.

"Donald Trump tonight sent a warning shot to our party: if we nominate a candidate like Joe Biden who has repeatedly tried to cut Social Security and pushed disastrous trade deals, Trump will exploit that vulnerability in an effort to obscure his own record and win the battleground states that could swing the general election," said Shakir.

"Bernie Sanders consistently fought Joe Biden's efforts to cut Social Security and pass terrible trade deals like NAFTA," Shakir continued. "That was not only the right thing to do, it is a record that makes Bernie Sanders a far stronger general election candidate against Trump. Bernie's consistent record at the top of the ticket will allow Democrats up and down the ballot to expose Trump's efforts to slash Social Security and his work continuing a disastrous trade policy that harmed so many communities."

The Sanders campaign has intensified its criticism of Biden's policy record in the wake of Super Tuesday, which saw Biden win 10 states and take a narrow delegate lead over the Vermont senator. On Wednesday, as Common Dreams reported, Sanders launched an ad blitz in key states set to vote on March 10 and 17, such as Michigan, Washington, Illinois, and Florida.

"We are not gonna cut Social Security," Sanders says in the ad, "we're gonna expand benefits."