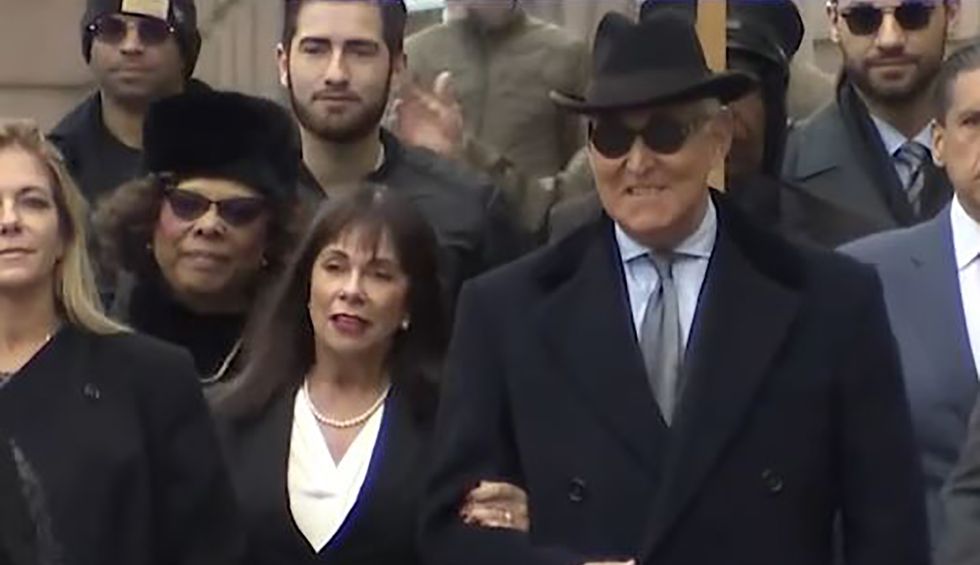 In the days leading up to Roger Stone’s sentencing for involving himself in a conspiracy to help foreign interests influence our 2016 presidential election, Judge Amy Berman Jackson allowed Stone to be deposed by conservative lawyer Larry Klayman. So, in the two days right before Valentine’s Day, Stone was forced to sit and take questions from Klayman about more than a handful of civil cases the political operative is also involved in. Those include a libel case with lawyer Larry Klayman himself, whom Stone opined “could be the single worst lawyer in America” and has an IQ lower than 70.

Judge Jackson allowed the deposition to take place in a Florida court reporter’s office. In video of the 5.5-hour, two-day deposition, Stone shakes and does stressful stuff with his teeth and his hands, while losing his trademark cool a lot. Like a lot a lot. Like an unhinged amount. Highlights pulled out by Politico include Stone saying he isn’t going to be “badgered by this bastard” Klayman, as well as calling Klayman a “bitch.”

There are moments where Stone slams his hand on the desk for emphasis and frequent displays of rage, as Stone bares his teeth and attacks Klayman. Klayman in turn, needles Stone throughout the questioning. The two men do not like one another very much. At all.

To be clear here, Larry Klayman is a bananas conservative who once called for President Obama to be overthrown like Egypt’s former president Mohamed Morsi. Before now he was probably best known as the conservative lawyer who spent a good deal of his career badgering the Clintons, and representing Benghazi families suing Hillary Clinton. He began the conservative “watchdog” group Judicial Watch, and says that Jesus himself came to Klayman while he was driving in Los Angeles, to set him on his righteous legal path of suing everyone. Like Stone, Klayman is a special kind of crusader.

The fact that these two conservative cartoon characters are butting heads is fun to watch in its own way. But the real take away is that Stone, under obvious duress, is something to see. This is the kind of dull-witted brutality and grotesquery that too much money and power support. It usually immunizes the people making important decisions in our country from being publicly unmasked.

You can watch some of the more cantankerous arguing in the Day Two deposition below, posted to Freedom Watch’s YouTube channel (Klayman’s other organization), as well as a supercut put together by Politico: