Trump’s response to the coronavirus pandemic is that of a ‘weakman authoritarian’ — not a full-fledged ‘autocrat’: Politico founder 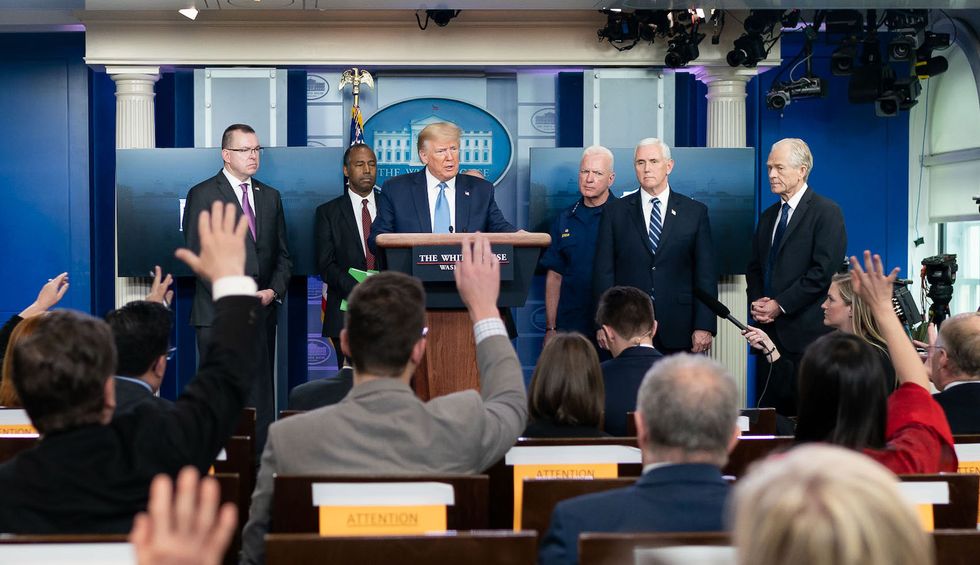 Critics of President Donald Trump have often used the word “authoritarian” to attack him, noting the admiration that Trump has expressed for bullies like the Philippines’ Rodrigo Duterte, Brazil’s Jair Bolsonaro, Turkey’sRecep Tayyip Erdoğan and Russia’s Vladimir Putin. But Politico co-founder John F. Harris, in a thought-provoking article published on March 26, argues that Trump’s response to the coronavirus pandemic is that of a “weakman authoritarian” — not a true strongman or a “autocrat.”

Harris doesn’t deny that Trump has authoritarian instincts, but he essentially argues that the U.S. president lacks the self-discipline of a true “autocrat.” And such an autocrat, according to Harris, would have used the pandemic as an excuse to exert as much control as possible.

“The notion of Trump as authoritarian strongman,” Harris contends, “has been cast in an odd light in this pandemic. Would-be tyrants use crisis to consolidate power. Trump, by contrast, has been pilloried from many quarters, including many liberals, for not asserting authority and responsibility more forcefully to combat COVID-19. Rather than seizing on a genuine emergency, Trump was slow to issue an emergency declaration, moved gingerly in employing the War Production Act to help overburdened local health systems, and even now, seems eager to emphasize that many subjects — closure of schools and businesses, obtaining sufficient ventilators — are primarily problems for state governors to deal with.”

According to Harris, there are two main “pillars” of “anti-Trump” thought coming from his “most ardent detractors”: the first pillar is that he is “a terrible person whose terribleness finds expression in terrible policies,” while the “second pillar” is that Trump is “a leader bent on amassing personal power and undermining constitutional democracy.” And during the coronavirus pandemic, Harris writes, one could make an argument for the “first pillar” much more easily than for the second.

“Even a Trump defender could comprehend how Trump critics would seize on the performance of the past two months — ‘we have it totally under control,’ he said on January 22 — to add damaging new counts to the indictment they began compiling four years ago,” Harris observes.

But in “recent weeks, according to Harris,  the “second pillar” has “wobbled.”

“Perhaps the way to think of Trump is as an authoritarian weakman,” Harris writes. And he points to Trump’s “I don’t take any responsibility at all” assertion in reference to coronavirus’ spread in the U.S. as an example of someone who doesn’t have what it takes to be a full-fledged strongman. Another recent Trump quote that Harris cites is, “The governors, locally, are going to be in command. We will be following them, and we hope they can do the job.”

“Quotes like these don’t mean the critique of Trump as aspiring dictator is in terminal condition,” Harris asserts. “But it is on bed rest with a high fever.”