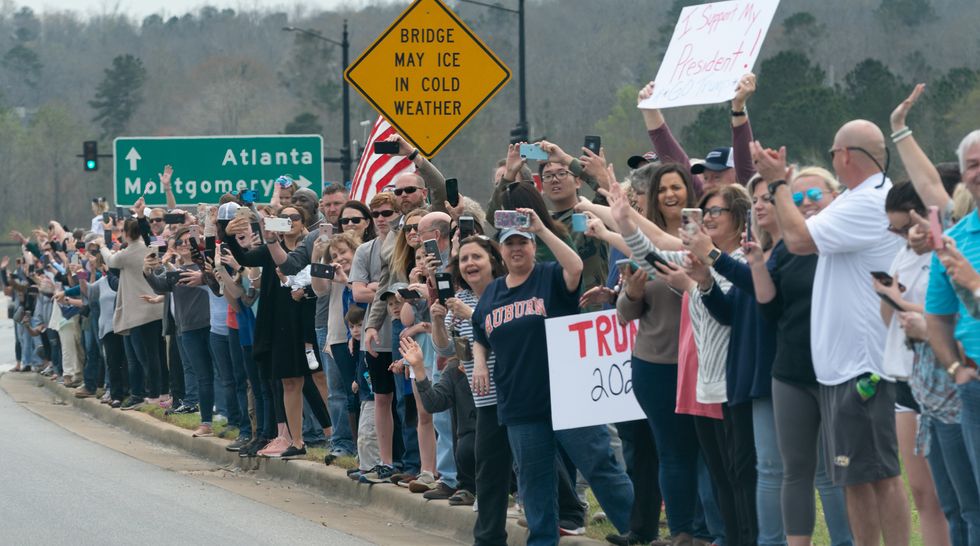 Because Donald Trump is a raging narcissist, he's incapable of comprehending events in any context beyond his own self-interests. As a result, he has so far refused to acknowledge that the coronavirus as anything other than a Democratic “hoax” designed to tank the stock market and hurt his chances in November. It is, he insists, “like the regular flu that we have flu shots for,” and claims that “a lot of people think that goes away in April with the heat.”

Because most of the conservative press are corrupt and intensely partisan, they have run with this preposterous storyline despite the fact that stock markets all over the world have tanked and major American ports predict massive drop-offs in trade as supply-chains are disrupted by the pandemic.

Because a significant share of Trump’s base behave like cultists, it’s safe to say that a large swath of MAGA nation will take Trump's nonsense seriously, and reject the advice of experts to wash one’s hands regularly, maintain some social distance whenever possible and get tested for the virus and self-isolate if one experiences any symptoms.

Because of partisan geographical sorting, these people aren’t distributed evenly across the country. They, like the rest of us, tend to cluster in communities with other like-minded people.

Epidemiologists talk about the importance of “community mitigation” of pandemics. According to the CDC, community mitigation “aims to slow the spread” of an outbreak “through the use of nonpharmaceutical interventions (NPIs) and through travel and border health measures. In the absence of medications or vaccines, community mitigation measures are the first line of defense against highly transmissible infectious diseases.”

Because of all of the above, it isn't at all unreasonable to expect the coronavirus to spread more rapidly in areas where Trump’s supporters tend to live than in areas where a larger share of the population trusts public health officials over the semi-coherent ramblings of the president*. If that scenario does come to pass—and it’s quite possible that Trump will be convinced at some point that it isn’t in his best interests to downplay the seriousness of the outbreak--more people in Trump country will contract the disease as a direct result of his reckless and instinctual politicization of everything.

Unsurprising, but The Wall Street Journal reported this week ($$) that former Crooked Illinois Governor Rod Blagojevich's clemency "culminated a nearly two-year campaign to put the once-prominent Democrat’s case on President Trump’s agenda" on the part of a Republican operative who enlisted the help of, among others, Fox News, Rudy Giuliani and... Jesse Jackson.

Trump's purge of officials deemed insufficiently loyal to Dear Leader is continuing apace with the help of a 23-year-old college senior named James Bacon, who was hired "to be one of the top officials in [the White House's] powerful Presidential Personnel Office," according to Politico.

CDC head Robert Redfield has come under fire for first deciding to leave Americans on a cruise ship that was quarantined off the coast of Japan with the coronavirus and then, after evacuating them on trump's order, sending a team to process the new arrivals that was unprepared and didn't take proper precautions to avoid contracting the illness and spreading it beyond the quarantine facility.

This should come as no surprise. As Laurie Garrett wrote when he was first appointed in 2018, "Redfield's early engagement with the AIDS epidemic in the US in the 1980s and 90s was controversial."

As an Army major at Walter Reed Medical Institute, he designed policies for controlling the disease within the US military that involved placing infected personnel in quarantine and investigating their pasts to identify and track possible sexual partners. Soldiers were routinely discharged and left to die of AIDS, humiliated and jobless, often abandoned by their families.
In the 1980s Redfield worked closely with W. Shepherd Smith, Jr. and his Christian organization, Americans for a Sound AIDS/HIV Policy, or ASAP. The group maintained that AIDS was "God's judgment" against homosexuals, spread in an America weakened by single-parent households and loss of family values.

I think I’d rather see the coronavirus team in a room with a lot of screens and maps and what not. This looks like… https://t.co/hzrcWv0zaV
— Schooley (@Schooley)1583022289.0

The AP reports that Trump's relentless efforts to sidestep Congress's power of the purse is causing "rare Republican opposition to one of Trump’s priorities."

Lawmakers from both parties told Pentagon leaders on Wednesday that the Defense Department is undermining its own efforts to get military money by diverting billions of dollars for the construction of President Donald Trump’s U.S.-Mexico border wall

The chairman of the House Armed Services Committee and the committee’s top Republican warned Defense Secretary Mark Esper that overturning congressional funding decisions to shift money for the wall is an enormous problem that will have consequences.

Pretty sure these stories are related:

From the 'continued alarm' file...

More than 60 former prosecutors urged the acting U.S. attorney for Washington, Timothy Shea, to take a public stance against political interference by the Trump administration in a letter sent Wednesday.

It's remarkable that one of our major political parties has only two policy ideas: punishing immigrants and the poor and passing high-end tax-cuts.

Acting White House Chief of Staff Mick Mulvaney also said a proposal to index capital gains taxes for inflation is also on the table as the administration crafts its long-promised plan for a second round of tax cuts.

“We need to do the second part of the tax bill — we really do, Tax Cuts 2.0,” said Mulvaney, when asked about the president’s top priorities should he win a second term. [Politico]

Three ideas, if you count relentlessly bitching about how unfair the media are.

The Trump campaign has shelled out more than $2 million in two years to a law firm known for suing media companies, a signal President Donald Trump's reelection strategy will be about going to war with the media as well as taking on his eventual Democratic rival. [CNN]

The Consumer Financial Protection Bureau (CFPB) is proposing a new rule that would allow debt collectors to "trick consumers into bringing dead debts back to life," according to The WaPo.

Debt collectors lose the right in many states to sue consumers after their debt reaches its statute of limitations, typically three or more years. But there’s a loophole: If the consumer makes a payment or acknowledges the debt in writing, that can be used to try to revive the life of the debt, creating what some consumer advocates call “zombie debt.”

The CFPB estimates millions of consumers are contacted about such time-barred debt every year. In a new proposal, the bureau says debt collectors could continue to try to collect on those old debts...

The proposal is part of a broad revision of debt collection rules the CFPB implemented last year that include allowing debt collectors to call consumers seven times a week and to send unlimited texts and emails.

NLRB just announced a rule that would make it harder for workers at fast-food chains like McDonald's to hold the co… https://t.co/aqTNqyQgN8
— Noam Scheiber (@Noam Scheiber)1582638798.0

We leave you with a bit of good news this week, courtesy of The Washington Post.

A federal judge in Idaho has voided nearly 1 million acres of oil and gas leases on federal lands in the West, saying that a Trump administration policy that limited public input on those leases was “arbitrary and capricious"...

As the Trump administration has pushed to expand domestic energy production — earlier this month the Interior Department celebrated the fact that last year more than 1 billion barrels of oil were produced from drilling offshore and on public land — it has adopted several measures to curb public comment on regulatory decisions.