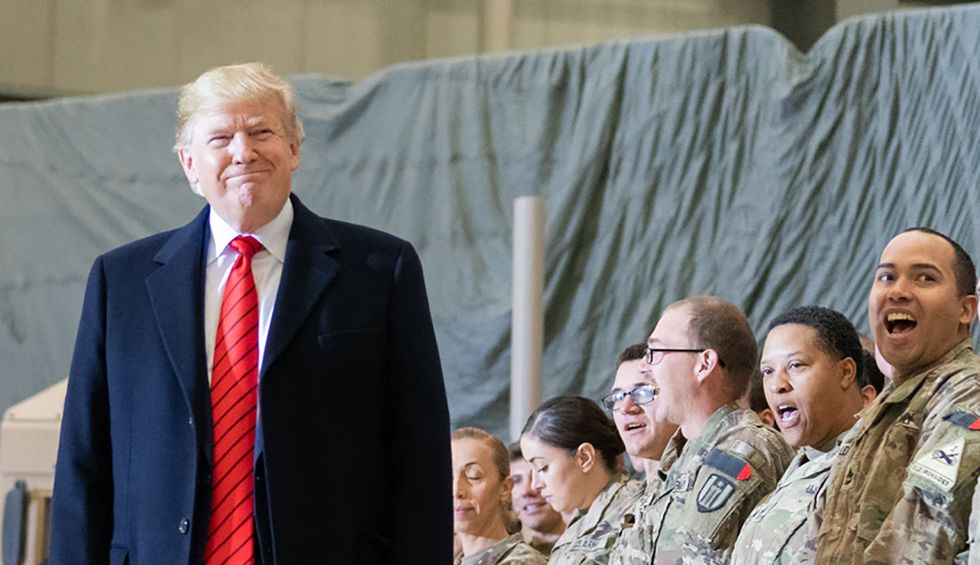 As the effort to end the U.S. war in Afghanistan continues to unfold, public support for the military as an institution has remained high, as has appreciation for service members themselves.

After 18 years of war, Americans have grown used to thinking separately about soldiers and their missions. But what would happen if President Donald Trump, a controversial leader in a time of great political division, started a new war?

The prospect seemed real as recently as January, in a week of

brinkmanship with Iran that followed the killing of an Iranian general. The question that kept troubling me was one that had also troubled the framers of the Constitution.

It was not the tactical aspects of a confrontation that I found worrisome. U.S. combat capabilities far outmatch those of most of its potential opponents. Instead, as a military law scholar and military lawyer, I was troubled by the question of how the men and women tasked with doing the fighting would be viewed by their fellow Americans.

Many Americans would likely view a Trumpian war as a misguided effort. I’m concerned it’s too optimistic to assume that service members would be immune from the intense emotions generated by their commander-in-chief. In fact, I believe a scenario where the troops become acceptable political targets is increasingly becoming more likely.

President Trump has tied the military into partisan politics in a new way, one that has transformed the military’s public image. He has made similar efforts in the Department of Justice and the federal judiciary, but making the armed forces a personal political tool may be the most significant.

Trump has repeatedly sent the message that the military is “his.” He has attacked political opponents during speeches to the troops, humiliated top Pentagon thinkers and strategists, and pardoned rogue operators accused of war crimes. Most recently, he had impeachment witness Lt. Col. Alexander Vindman escorted out of the White House.

The language Trump uses is perhaps most notable. His frequent use of the phrase “my generals” irks strait-laced military types, prompting former Defense Secretary William Cohen to retort: “It is not his military. These are not his generals.”

This sort of behavior is meant to convey the idea that service members work for him personally, as subordinates of their commander-in-chief. By projecting a sense of ownership over service members, Trump has ushered them into the political arena – which the framers warned against and the military has studiously avoided for more than two centuries.

A focus on citizen-soldiers

The framers worried that if the public became disconnected from the military members who defended them, the president would be inclined to exert partisan control over the troops. They knew all too well how kings misused armies to intimidate rivals, curry public favor and dominate the other branches of government.

Politicization of the military, they said, would destabilize the new democracy. James Madison observed that “a standing army is one of the greatest mischief that can possibly happen.” When led by an “overgrown Executive,” Madison added, a standing army becomes a grave threat to liberty.

The framers sought to guard against presidential mischief-making by giving Congress the ability to declare war and control the military budget. But perhaps the most vital check on outsized presidential control, they said, would be the citizen-soldier.

Instead of a large standing army, the framers embraced a system where merchants, teachers and lawyers alike – people who were the backbone of the community – would serve part-time in state militias. (This group is now known as the National Guard.)

“Every citizen should be a soldier,” Thomas Jefferson said. “This was the case with Greeks and Romans, and must be that of every free state.”

As members of the militias, civilians from all social strata would, in effect, have their own power to decide when to wage war. A president would not be able to treat the armed forces as his own.

Reflecting on the framers’ theory, General George Marshall, agreed in 1951: “There must not be a large standing army subject to the behest of a group of schemers. The citizen-soldier is the guarantee against such a misuse of power.”

Over the years, the U.S. has rejected the framers’ guidance. The notion that “every citizen should be a soldier” is now a quaint idea from a bygone era. The dependence on a part-time militia yielded to a massive standing army nearly 80 years ago.

Service members and everyday Americans have become virtual strangers. The less than 0.5% of the populace actually serving in uniform is largely clustered in rural areas such as Ft. Campbell, Kentucky, and Ft. Hood, Texas, literally out of sight from their civilian counterparts.

The disconnection is most striking at the top echelons of society. Neither Trump nor more than 80% of congressional members have served in the military. Once considered a prerequisite for entry into elite society, military service is now seen as a fool’s errand.

The children of the wealthy and powerful are more likely to pursue an Ivy League education and a high-paying job than don a uniform. Recognizing the well-to-do’s lack of interest, military recruiters train their sights almost exclusively on poor kids.

As the president continues to merge the military into his political agenda, it’s clear to me that the checks and balances the framers built into the Constitution to prevent presidential domination of the armed forces aren’t working. A president can merely veto any attempt to restrain his war-making ability, as Trump has done before. Congress is a far less functional body today than it was in 1973, the last time it overrode a presidential veto in the national security context.

The framers’ fail-safe – the idea that the citizen-soldiers might refuse to fight in an unjust or unwarranted war – is gone, too. The civic norm of universal service has given way to an isolated, and insular, all-volunteer force.

That leaves conditions ripe for those who serve in those wars to be blamed for the conflict as much as the politicians who might actually start it.

It’s certainly much easier to revile strangers in a professional, all-volunteer army than to rain disapproval on your cousins, neighbors and co-workers in a citizen militia.