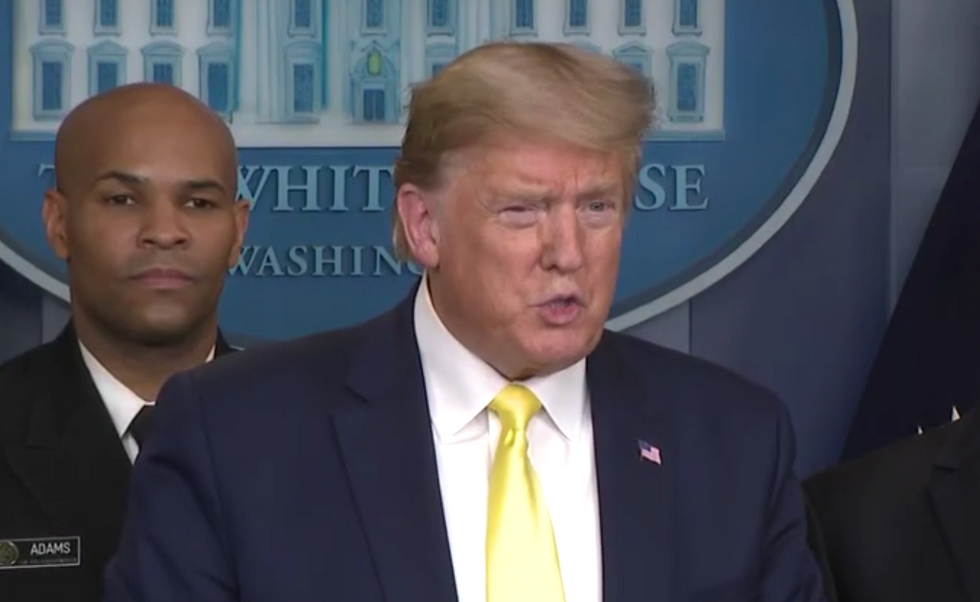 During a Monday evening press conference on the rapidly spreading coronavirus, Donald Trump rushed to assure Americans the economy would be fine. All that stuff about public health and keeping Americans alive was left to Trump’s No. 2, Mike Pence, later in the press conference. “We have been handling it very well,” Trump said, congratulating his own administration on what, by nearly every account, has been a completely botched response rife with delays and disinformation, often spread by Trump himself.

Trump actually didn’t offer anything concrete on the economy yet, but clearly the worst market drop in over a decade has focused what’s left of his mind. He said he planned to convene a meeting with Senate Republicans on Tuesday in order to find ways of easing the burden of the economic fallout on hourly wage earners, small businesses, and the hospitality industry (which happens to include his own hotels). Trump suggested they might accomplish these goals by creating specific loans for small business and passing temporary payroll cuts. But whatever they do, it will be “very major” and “very dramatic,” according to Trump.

UPDATE: Another genius move by Trump pays off

After talking about the economy, Trump left the public health portion of the address (secondary to the economy, of course) to Pence, fleeing the White House press briefing room as he dodged questions about whether he had been tested yet for the coronavirus.

That same testing question quickly fell to Pence, who said he had not been tested for the novel virus. Pence also said he didn’t know whether Trump had been tested yet, but he promised to get an answer from the White House. The testing question has arisen because four GOP lawmakers recently went under self-quarantine after coming in contact with someone at CPAC last week who later tested positive for the coronavirus. One of those lawmakers, Georgia Rep. Doug Jones, shook hands with Trump over the weekend during his visit to the Centers for Disease Control.

For this part, Pence mostly praised Trump’s leadership, claiming the administration bought “a considerable amount of time” to deal with the virus based on Trump’s decisive actions. Pence also promised that his task force would soon be providing “community guidance” on how to keep people safe at home, at work, and at school.

What is clear is that the administration seems to have gotten the hint that the situation has the potential to turn dire and people are feeling a tad panicky. If the stock market hadn’t taken an epic plunge Monday, Trump might still be encouraging people to go to work with the virus, like he did last week.

At the very least, the administration now seems intent on easing cost as a barrier to closing down businesses, schools, etc. in order to keep the coronavirus from spreading. That’s a step in the right direction.

Here’s Pence on not getting tested.