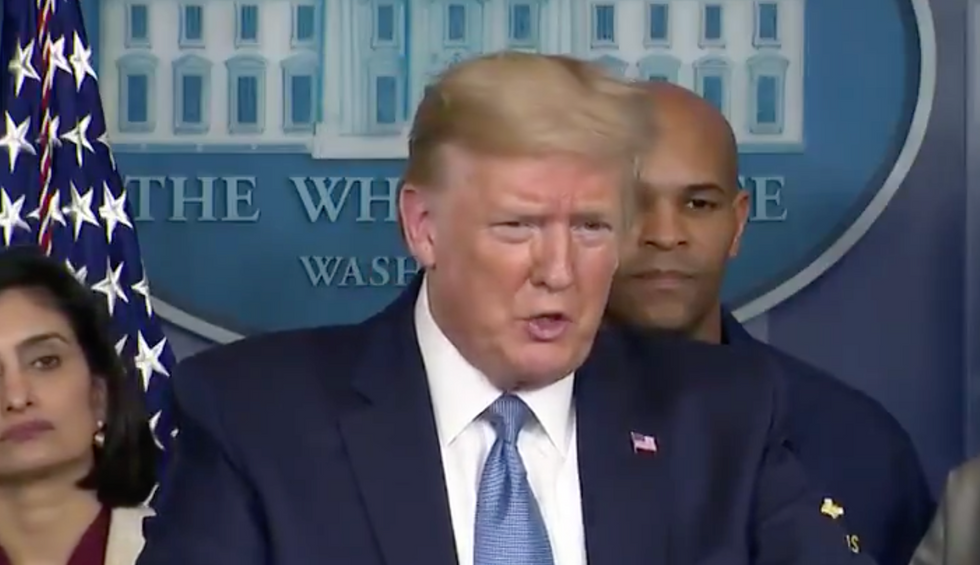 Asked how he would rate his response to the coronavirus during a press briefing Monday, Donald Trump put himself on a par with '80s film star Bo Derek: "I’d rate it a 10,” he responded. “I think we’ve done a great job.”

But the stock market vehemently disagreed, nosediving 2,999 points since the day’s opening.

Here's what that looked like in real time Monday, shortly before close.

During the press conference, Trump announced new nationwide guidelines to stem the spread of the virus, including recommending against gatherings of more than 10 people. Some media seemed impressed with Trump's seriousness—as in, the fact that this is a serious and deadly problem seems to have finally breached the barricade to his brain.

"Trump has been a different person in this presser," claimed the Washington Post's Aaron Blake.

One reporter revisited Trump's "I don't take responsibility at all" statement from Friday. "Does the buck stop with you, Mr. President?" he asked.

"Normally yeah but this has never been done before," Trump responded.

So, no, not different. Indeed the same person who took no responsibility "at all" last week. Trump claimed of the record-setting contagion that “a month ago [he’d] never even thought about it."

And how about his repeated claim that “everything is under control” and “The Coronavirus is very much under control in the USA” and “we have tremendous control”? Not so much anymore.

"That's not under control for any place in the world,” Trump said of the virus Monday, denying that he was really talking about the virus when he claimed things were “under control.”