Trump flees Afghanistan — but the US is still there 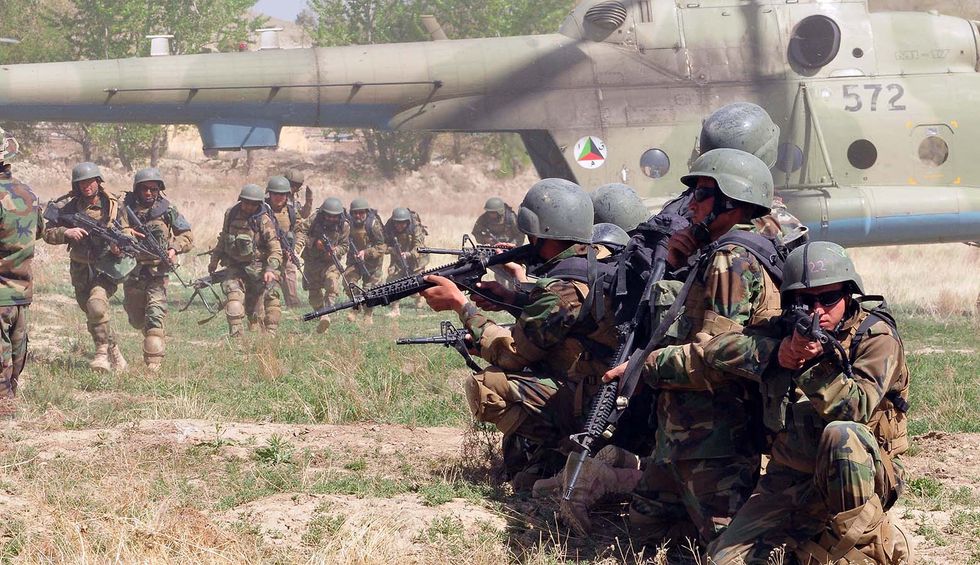 It's over. Donald the Dealmaker says that he has ended America's long nightmare in Afghanistan, finally terminating 18-plus years of grinding war (the longest in U.S. history). After more than 2,400 Americans killed (another 20,000 wounded), more than 100,000 Afghan citizens killed (countless more maimed) and roughly $2 trillion wasted, Trump is crowing that he's negotiated an end to the ridiculously expensive and pointless military adventure.

Only ... he hasn't. His flimsy four-page document, signed with a group of Taliban officials on Feb. 29, is not an end to hostilities and does not require disarmament or even a cease-fire. It's just a cynical, face-saving device so Trump can withdraw a few troops and then claim in his reelection campaign that he's fulfilling his 2016 promise to end "endless wars." This so-called Afghan peace accord merely asks Taliban warlords to agree to -- get this -- a (SET ITAL) seven-day (END ITAL) "reduction in violence." There's not even a clear statement on what constitutes a reduction or violence, much less any agreement on steps toward achieving real peace.

The deal is so weak that Trump's secretary of state, Mike Pompeo, could muster nothing but weasel words to describe it. "We are now on the cusp of having an opportunity which may not succeed," he mumbled. Taliban leaders, however, were not at all wishy-washy about signing, boldly staging a victory parade just before the ceremony and hailing the event as "a day of pride" for their win over "invader Americans." Few U.S. military leaders think the deal will stick, privately saying they doubt it'll even survive until our November election. Even as it was being signed, Pentagon chief Mark Esper emphasized that the U.S. "would not hesitate to nullify the agreement" and resume the war if the regional warlords act up, which some almost certainly will.

Oops ... some already have. The seven-day hiatus in hostilities promised by Trump's peace ploy was violated just three days after it was signed! On March 3, the Taliban mounted 43 attacks on security checkpoints run by the U.S.-backed Afghan military, killing at least 25 of our allied soldiers. This was followed the next day by our own drone attack on the Taliban fighters. Embarrassingly, this sudden re-eruption of outright war came only a few hours after Trump bragged to reporters that he had telephoned the Taliban's chief peace negotiator, who had assured him that Taliban leaders "don't want violence." Our wheeler-dealer-in-chief called it "a very good talk."

Talk aside, war is real, and it's not ended by a presidential PR job. Far from withdrawing from Afghanistan, Trump's hoked-up agreement actually creates conditions for more U.S. involvement, including his concession to release 5,000 Taliban fighters from Afghan prisons, summarily reversing military gains that Americans and allies died to make. Moreover, the deal extends U.S. entanglement by specifically committing our troops and taxpayers to continue backing and financing the weak Afghan military indefinitely -- while also pledging to continue paying for and propping up this wobbly nation's notoriously corrupt, deeply divided and hopelessly incompetent government.

In short, as usual in a Trump deal, this one is all about him -- far from extricating the U.S., it's an escape clause written for his political advantage.

Meanwhile, back in the real world, the Taliban is an inordinately complex and perplexing collection of regional warlords who resist all central governmental authorities. Not for nothing is this violent, inhospitable land of rural mountain wilderness known as the "graveyard of empires." While its tribalism and religious fundamentalism are repressive and primitive, its people have repeatedly outfoxed and outlasted such "conquering" powers as imperial England and the Soviet Union.

In dealing with them, poor Donald is simply in over his head, and as we know, he doesn't listen to advisors who might be smarter than he is about the treacherous nature of fighting the Taliban. Indeed, while Trump referred to the guy he telephoned on March 3 as "the leader of the Taliban," he's not. He's Mullah Abdul Ghani Baradar, who's not an honored warrior but a career Taliban politician. As pointed out by the CIA's former chief of counterterrorism for Afghanistan, the mullah's contingent of dealmakers "are largely disconnected from and disrespected by the Taliban's senior leadership." Perhaps that's why our president's negotiated peace deal lasted three days.

The larger lesson, though, is that brute military force by an outside power -- whether in Afghanistan, Vietnam or wherever next -- is not a path to victory, much less peace. For years, even as former Presidents George W. Bush and Barack Obama, Trump and their political enablers (generals, Congress and the media) were bragging that they were bringing democracy to Afghanistan, they were jiving and outright lying. As one strategic planner, Army Gen. Douglas Lute, admitted in 2015, "We didn't know what we were doing."

Tell that to the thousands who've died from the ignorance and lies of our so-called leaders.