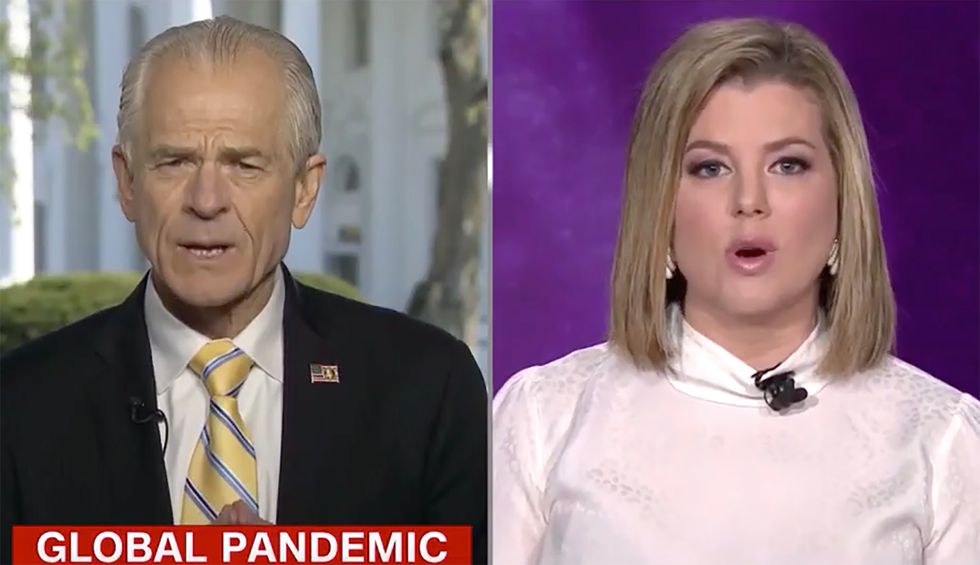 The two were discussing the lack of protective equipment available for healthcare professionals on the front lines of fighting to save people suffering from the coronavirus. The president has said that he is leaving it up to governors to find their own masks and ventilators. New York has begged the federal government for some of their surplus supply while other companies ramp up efforts to produce more.

Gov. Andrew Cuomo (D-NY) requested 30,000 ventilators but he only got 4,000. He told the federal government that they are going to have to give direction over who to choose to die.

When faced with questions about the federal government being caught flat-footed, Navarro bristled with defensiveness.

“The Chinese Communist Party cost this country and the rest of the world six-weeks of preparation because they did not tell us early to mid-December that there was a crisis of human to human transmission with a new novel coronavirus,” Navarro said. “That has set the world back six weeks so we are dealing with this issue every day. We have a full force of the federal government.”

Cases of coronavirus didn’t surface until November 19 and the Chinese didn’t discover what it was significantly later. On December 31, China alerted the World Health Organization to several cases of an unusual type of pneumonia in Wuhan. At that point, the virus was still unknown. They didn’t uncover it was a new strain of a virus until Jan. 7. The first case hit the United States on January 19. It took Trump 40 days from that point to declare a national emergency and begin taking action. Intelligence reports date back to January demanding action on coronavirus. Thursday marks day 67 since the first case hit the U.S.

“In fairness, the government was clearly ill-prepared for this,” Keilar shot back. “This is not something that, you know, these viruses happen and how awful they are. But they are things that happen. Your government knew in the summer when they did a drill if this happens, this would be a problem and there was a lack of preparation which was why we have you on to talk about the sly supply chain. The US, it looks like, is going to be about 200,000 ventilators and what experts are saying there could be a million needed. Are you going to be able to meet that demand?”

She also asked if the president understands that relaxing restrictions on April 12 means that the hospitals are going to need even more.

Navarro turned to blame President Barack Obama’s administration and their reaction to H1N1.

“Peter, why are you wasting your time on this and not solving the problem you have? Peter why are you even talking about this?” Keilar asked.

“You made the claim that this administration was ill-preparedv,” Navarro said.

“That’s a fact, Peter. That’s a fact,” she replied. “I’m just asking you if you’re going to be able to get to a million ventilators.”

“Look, if you’ll let me,” Navarro tried to respond.

“Are you going to have a million ventilators?” she asked again.

“You keep talking in my ear and you won’t let me talk,” Navarro whined.

“Will you answer the question? Can you get to a million ventilators?” Keilar asked.

“That wasn’t the question. You asked, why this administration was ill-prepared,” Navarro said before going off on a rant about not having enough resources. He called it a 500-year-flood when the US was only equipped to handle a 100-year-flood. “We’re doing the best we can, but don’t tell me we were ill-prepared for this because we inherited a system of testing a system of stockpiles that was woefully inadequate.”

As a fact check, there were no tests for coronavirus in the stockpile because coronavirus didn’t exist until now. The White House was warned by the Obama administration and by Trump’s own staff in a 69-page report three years ago that they were not prepared if a pandemic hit the United States.

The conversation devolved into chaos from there: