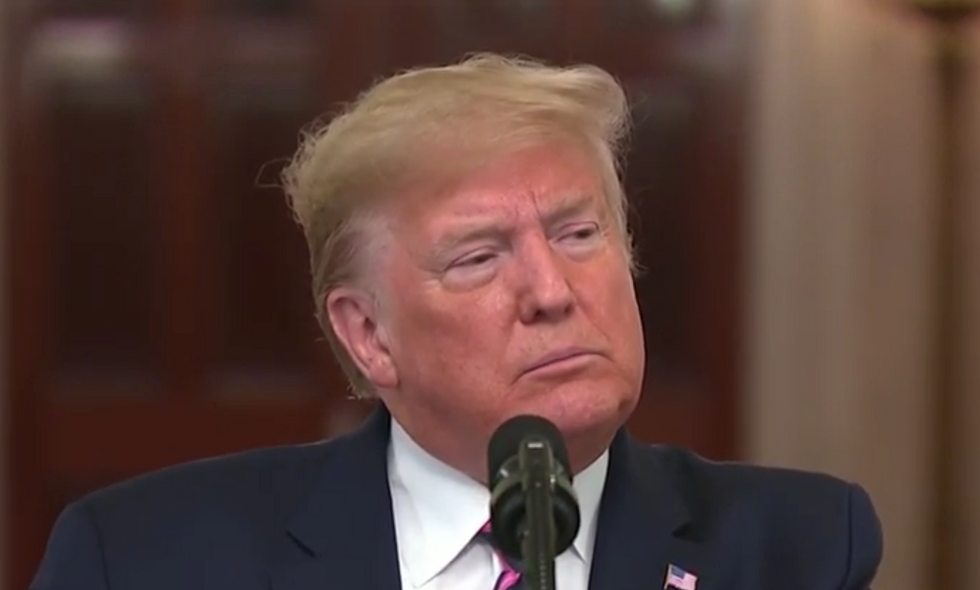 President Donald Trump has often expressed his disdain for “globalism,” pushing an agenda that stresses nativism and nationalism and often echoes the “American first” themes of Patrick Buchanan’s presidential campaigns of the 1990s. To many Trumpistas, the fact that former Texas Rep. Beto O’Rourke enjoys speaking Spanish during his appearances on Univision and former South Bend Mayor Pete Buttigieg is proficient in multiple languages shows that they aren’t truly American. But journalists Ryan Heath and Eli Okun, in a March 6 listicle for Politico, assert that Trump’s hatred for “globalism” is horribly misguided when it comes to the threat of coronavirus — stressing that the rest of the world exists whether Trump likes it or not.

Trump, according to Heath and Okun, is “caught between his nationalistic impulses and a globalist disease.” In other words, hating former Florida Gov. Jeb Bush because he’s a fluent Spanish speaker won’t keep coronavirus from killing Americans. And their Politico listicle describes “five challenges Trump faces as he attempts to navigate the global politics of the outbreak.”

#1 is “borders, internal and external.” Trump loves to claim that his Democratic critics favor “open borders,” which is fear-mongering nonsense. Heath and Okun explain, “Attempting to harden borders isn’t a long-term solution to a crisis that requires cross-border cooperation. Epidemiologists and other experts say such limits might help slow the spread of disease by a few days or weeks — at best.”

#2 is “international institutions.” Heath and Okun point out that Trump has “questioned the mission of global organizations like the United Nations and the NATO military alliance” and has “limited extra U.S. investment globally to $37 million for the World Health Organization.” Problem: the U.S. needs the input of its allies in other countries when it comes to fighting coronavirus. The U.S. and its allies in Europe, Asia and Latin America have a mutual enemy in coronavirus.

“While the U.S. already funds 22% of the WHO budget, the agency is asking donors for $675 million to help fight the virus, warning that it is struggling to support countries to test and isolate potential victims,” Heath and Okun write. “Yet so far, it has received less than half of its goal, even after getting a $125 million injection from the European Union.”

#3 is “business bailouts.” From an economic and business standpoint, the U.S. and many other countries have a mutual interest in combating coronavirus. Coronavirus is terrible for business whether it is killing people in Washington State or Milan, Italy.

Heath and Okun note, “The coronavirus is ripping through the global economy. Businesses that rely on the global supply chain are nervous about falling revenues. Insurers and hospitals are fretting about having to foot the bill for thousands of sick people. Airlines, shipping firms and conference planners have seen a major decline in business.”

Heath and Okun point out that “the U.S. military, as a global institution, is also grappling with the coronavirus.” And they cite some examples, writing, “The U.S. and South Korea, which has one of the highest number of cases, have already postponed their annual joint military exercises because of outbreak fears. And one American soldier in South Korea, along with dozens of Korean soldiers, has tested positive for the virus. The U.S. also canceled an exercise with Israel and is restricting troops’ travel as a precaution across the Middle East.”

“Refugee populations are potential global hotbeds for rapid outbreaks,” Heath and Okun warn. “There are three factors that make refugees a high-risk population: more men are getting infected than women, refugees have limited access to hygiene and health care systems, and refugees are highly mobile communities often operating under pressure from smugglers and police.”

In an amazingly stupid attack ad during 2012’s GOP presidential primary, former House Speaker Newt Gingrich (now a major Trump ally) lambasted candidate Mitt Romney (who became a U.S. senator via Utah in 2018) for being proficient in French — insisting that it showed that Romney wasn’t a true conservative. Then, in the GOP presidential primary of 2016, Trump attacked rival candidate Jeb Bush for speaking Spanish on the campaign trail. And in 2020, that type of nativist xenophobia continues to be a prominent feature of Trumpism.

But as Heath and Okun brilliantly demonstrate in their article, knowing some things about the rest of the world is not a liability where coronavirus is concerned — it’s an asset.