Even in the middle of a pandemic, Republicans continue to take hostages to advance their agenda 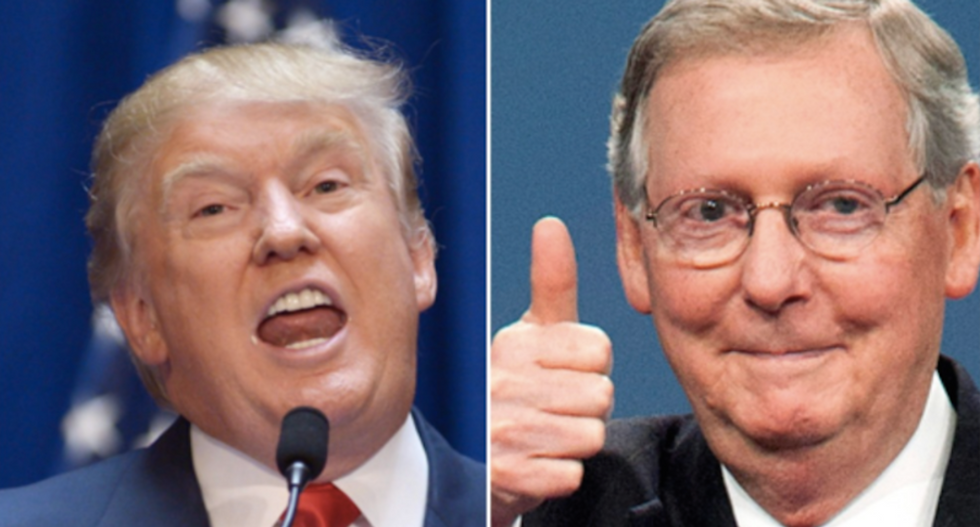 Compared with past fights over stimulus bills when the GOP controlled both the White House and Senate, Speaker Nancy Pelosi (D-CA) and Senate Minority Leader Chuck Schumer (D-NY) did fairly well. Senate Majority Leader Mitch McConnell (R-KY) couldn’t get a single Democrat to cross the aisle to support the first bill that he wrote with no input from the minority party, forcing him to negotiate the details of the package with his opponents.

The final result didn’t include high-end tax cuts and offered individual payments to families and significant new spending for hospitals, cash-strapped state governments and, the crown jewel of the deal, a massive expansion of the unemployment insurance system for the newly laid off. Critically, the new pandemic unemployment insurance rules will strengthen workers’ power to organize around, and even strike for, their demands for any new rounds of relief by both employers and the government.

But given the crisis facing the nation, shouldn’t Democratic leaders have been able pass a far more sweeping pro-family bill – the Maxine Waters bill in the House being a favorite example - without accepting the corporate bailout?

That was a view held not only by progressive critics but also by some centrists like former Obama campaign manager, David Plouffe, who argued in a tweet, “Senate GOP now has zero leverage in negotiation.” so Dems could “pass what you want.”

Senate GOP now has zero leverage in negotiation. And by extension neither does Trump. Can’t have millionaire membe… https://t.co/jgXuF2orA8
— David Plouffe (@David Plouffe)1584674843.0

The problem with this narrative is that this was less a budget deal than a hostage negotiation. Trump and the GOP had the leverage of any terrorist willing to kill their hostages—they knew that the other side wanted to prevent that at nearly any cost. Trump has made clear in every action during the coronavirus explosion that he is willing to let people die for political advantage, as are his GOP enablers.

The right knows that in any game of legislative chicken when lives hang in the balance, Democrats will blink first. That’s not because they’re weak negotiators but because they know that failure to come to an agreement would cause enormous pain to real people. Trump and the GOP don’t care, just as they don’t care about children in cages at the border or any other unspeakable crime they allow to fester.  Amid a pandemic, a reckless, uncaring party has an enormous amount of leverage indeed.

There has been persistent frustration on the left that Democratic leaders won’t threaten to shut down government or otherwise engage in brinkmanship like Republicans do when they’re the out-party. But an anti-government, anti-worker coalition doesn’t have to worry about the collateral damage that occurs if they carry out such threats. Democrats and their voters do care.

Trump and the GOP do care deeply about reelection, which, along with the stock markets, was the primary reason they were willing to spend trillions to keep the economy afloat. But in a stalemate, they can depend on Fox News, the conservative Sinclair network of 193 local television stations and the rest of the rightwing media to demagogue spending provisions sponsored by Democrats—even those that are popular among rank-and-file Republicans--and tell only the story they want their base to hear.

There is no equivalent media cover for the Democrats, as mainstream press conventions tend to result in stories about “both sides” being engaged in partisan squabbling in a “he said, she said” narrative that alienates core Democratic voters and independents.

What Democrats did have in this last fight was party discipline, with even conservative Dems like West Virginia’s Joe Manchin sticking with Schumer during the negotiations. That was enough to get a decent bill but not enough to force through everything Democrats proposed.

While Democrats didn’t get the restrictions Sen. Elizabeth Warren (D-MA) and others wanted to impose on Trump’s proposed political slush fund, they did assure that instead of being controlled directly by Treasury Secretary Steven Mnuchin, it would be structured as a lending program controlled by the Federal Reserve, whose chair cannot be fired at will by Trump. Even before the bill was approved, the Federal Reserve had been offering $1 trillion each day in short-term loans to banks to encourage them to keep lending to businesses. The new program will authorize additional direct lending to non-banks by the Federal Reserve, but it’s now mostly a supplement to the trillions that the Fed was already lending out to bolster the markets.

That the remaining $1.5 trillion in federal spending is going out to hospitals, mass transit systems, state governments, small businesses, and individual families to cope with the economic crisis we face is a firm rejection of austerity economics, one that progressives should celebrate.

But the centerpiece is no doubt the unprecedented Pandemic Unemployment Insurance (UI) portion, promising an additional $600 per week to every worker laid off because of the coronavirus- more than many low-wage workers were making when employed because of its structure. It also extended that coverage to the self-employed, gig workers and others excluded from traditional UI, as well as providing it to workers who quit their jobs because of personal safety concerns or the need to care for family members affected by the virus. That too was an unprecedented feature for unemployment insurance programs in the US.

Understandably, there is plenty of reason to just get dollars into the hands of people suffering during the crisis, but the UI changes also have the potential to help build the labor and political power to push through more radical policies in the future. For those immersed in workers’ rights policy, the weakness of our UI system has always been seen as a key part of employer power. In the US, any worker who challenges abusive workplace practices, tries to organize a union or goes on strike faces an overwhelming threat if they lose their job, since our unemployment insurance systems delivers only 30 percent of lost wages, on average—far less than in most other highly developed countries. And that’s if a worker qualifies under byzantine rules that often exclude 70 percent of the unemployed from receiving any UI payments.

There are many explanations of why union numbers have declined radically in the last fifty years and why strike activity has become so rare--from globalization to hostile courts--but one of the most extensive statistical analyses found that states with more generous UI systems had more strike activity and stronger union power to demand higher compensation. “The unemployment insurance system can have rather large effects on strike frequency,” the study’s authors wrote.

Realizing what they had conceded to Democrats in the deal, Republican Senators (unsuccessfully) tried to limit the UI benefits at the last minute, expressing the fear, as Senator Ben Sasse put it, that “we don't want this piece of the bill to create an incentive for folks to stop working."

It’s hardly a coincidence that, with many newly covered by the UI system, Instacart workers called for a national strike on March 30 demanding safer work conditions, even as Amazon workers on Staten Island planned a walk out as well, possibly a sign of a potential wave of strikes pandemic paired with beefed up UI could empower.

It’s important to recognize that this relief bill is unlikely to be the last. Having passed the Senate bill through the House, Pelosi signaled that she was ready to continue the effort, calling for a fourth round of relief legislation, including more funding for cash-strapped state and local governments, expanding family and medical leave to more people, strengthening food aid programs and adding stronger worker protections for first responders. She also signaled that further legislation must cover coronavirus testing and treatment costs, and called for stabilizing pensions undermined by the crisis and making additional direct payments for families.

More immediately, the question will be how the rest of us can bring street heat to the political fight when no one can be in the streets. Strikes and workplace actions taken on computer screens by those working at home may become a key tool for that public outrage in coming months. As state governments drown in debt and threaten budget cuts, teachers may restart the strike wave begun in 2018, likely joined by a host of other government workers, while front-line service workers will demand hazard pay as infection explodes around them.

And backing up those actions will be the new Pandemic UI system reducing the financial risk of workers standing up for their rights. One key measure of a successful reform is whether it strengthens the ability of people to make demands on the next round of needed reforms.  By that measure, the recent relief legislation was quite successful.