Super Tuesday sets stage for Biden vs. Bernie: 'A two-person race for future of Democratic Party and the country' 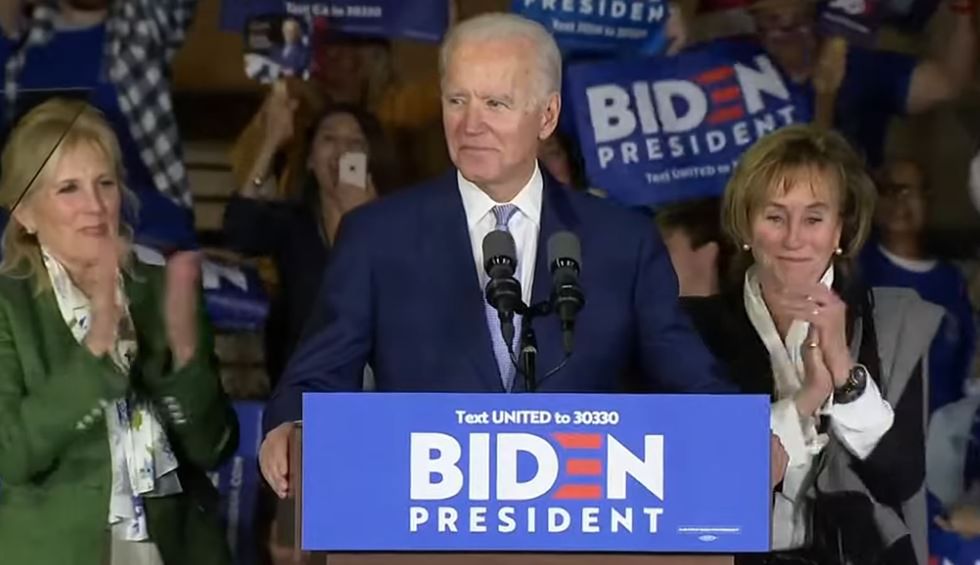 While there is still much counting of votes to be done before the overall outcome of Super Tuesday is fully calculated and understood, the key takeaway from the Democratic Party's largest single-day of voting thus far—with 14 states up for grabs, including Texas and California—is that what was once the largest presidential field of candidates in living memory is now down to just two: Sen. Bernie Sanders and former Vice President Joe Biden.

As of this writing, Biden—whose campaign was considered all but dead last week but enjoyed a great night for his campaign by steamrolling in the South and nabbing at least two upsets from Sanders—was able to claim victory in eight states: Virginia, North Carolina, Massachusetts, Tennessee, Minnesota, Alabama, Arkansas, and Oklahoma.

Meanwhile, news outlets called the biggest prize of the night, California, for Sanders, who also won in Colorado, Utah, and Vermont.

I am proud we delivered a big win for @BernieSanders in California. As the only CA House member backing Sanders,… https://t.co/XMgaNk5M8S
— Ro Khanna (@Ro Khanna)1583296353.0

In Texas—the second-largest state which voted Tuesday—Biden was declared the winner by a slim margin. In Maine, where the race between the two was neck-in-neck, Biden looked to be holding a slight edge.

"It's still early, but things are looking awful, awful good," Biden said at a rally in California. While acknowledging his campaign has appeared to be in rough shape, Biden said, "I'm here to report, we are very much alive!"

With the final tallies still to be counted in all the states to determine final delegate counts—a process that could take days or even weeks—it was clear to observers that the likely Democratic nominee is almost certain to be either one of two candidates: Sanders or Biden—each offering a clear choice and a distinct contrast.

At his rally in Vermont, Sanders addressed supporters by saying the choice before future Democratic primary voters will now be clear as he noted Biden's record of supporting corporate-friendly free trade agreements, voting in favor of the Iraq War, repeated calls to cut Social Security, and his status quo approach. "You cannot beat [President Donald] Trump with the same-old, same-old kind of politics," Sanders told the crowd. "This will become a contrast in ideas."

As Common Dreams reported Tuesday, an internal Sanders campaign memo reveals that it is already preparing to make those contrasts explicit going forward.

"With Biden bankrolled by a super PAC and boosted by billionaire donors, the primary is far from over," the memo states. "We are now entering the phase of the primary in which the differences between Bernie and Biden will take center stage."

With reports indicating that mega-billionaire Michael Bloomberg is considering dropping out of the primary race after his poor performance in the first states able to cast votes for him Tuesday, the pressure is seen to be mounting on Sen. Elizabeth Warren after placing third in her home state of Massachusetts and with no viable path to the nomination.

To push back against the corporate media framing of the Super Tuesday results thus far—which on MSNBC meant fawning coverage of the remarkable comeback of Biden's campaign—journalist Jeremy Scahill, who along with his colleagues at The Intercept and Democracy Now! hosted a roundtable of progressive coverage throughout the evening, tweeted just after midnight:

Glenn Greenwald, Scahill's fellow co-founder of The Intercept, also offered his thoughts on the coverage of the race in recent days, the establishment's swift coalescence around their now-anointed candidate, and the prospects of the contrast between Sanders and a candidate like Biden:

In earlier remarks, Greenwald did not mince words about what he sees happening. "The Democratic establishment—given the choice—would rather lose with Biden than win with Bernie, so being reminded of his visible cognitive decline won't change their calculus at all," Greenwald said. "The party elites are all already aware of it as they're lining up behind him."

Princeton University historian Matt Karp, in a tweet on Tuesday, put the situation going forward this way: "Joe Biden is getting a bounce today, mostly from nervous Dems who want to believe that a vote for Biden is a vote for unity against chaos. But tomorrow we'll wake up to a close race—not between unity and chaos, but between Joe Biden and Bernie Sanders. May the best candidate win."